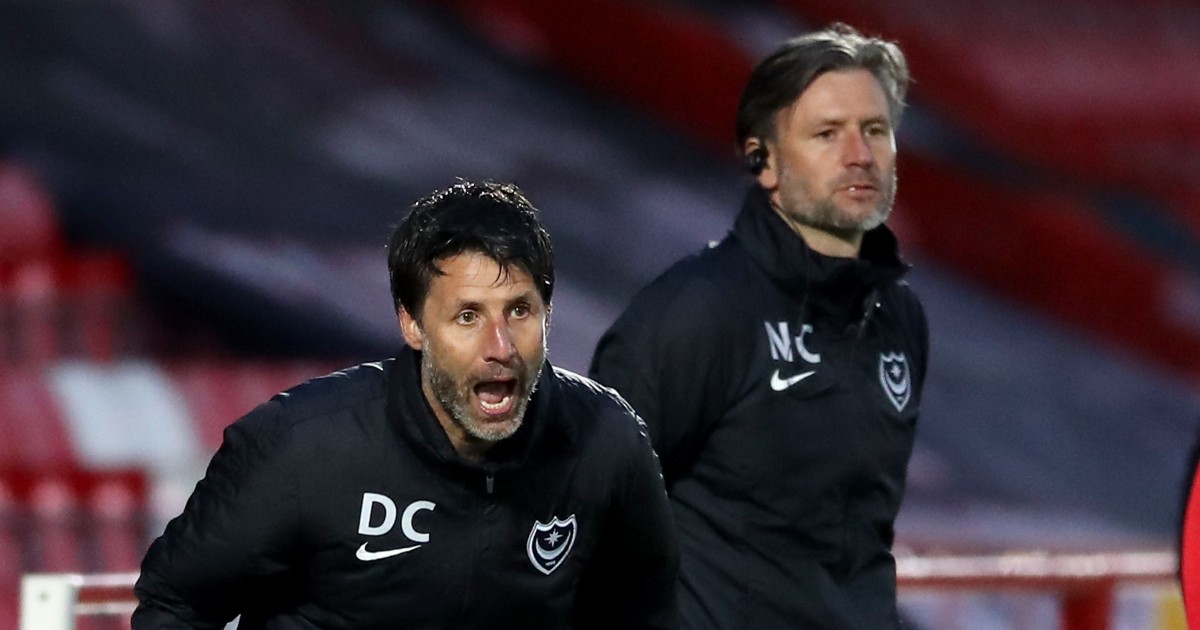 Danny and Nicky Cowley suddenly find themselves below the club they left for bigger and better things in 2019. Portsmouth are slipping away.

Just over two years since leaving the club with whom they made their managerial name on a nationwide scale, there is a poetic melancholy to Danny and Nicky Cowley’s Portsmouth side sitting directly beneath their old employers Lincoln City.

Having initially departed the Imps to join Huddersfield Town in September 2019, the decision to leave Sincil Bank after three highly successful seasons was understandable, but very much felt like swapping a club on an upward trajectory for one headed in the opposite direction.

Less than a year later, and despite having done what was asked of them by keeping the Terriers in the Championship to avoid a second successive relegation, the Cowleys were dismissed before the season was even out.

If the job done at Lincoln was extraordinary, then Huddersfield was simply a job done. Seven months at Portsmouth has been anything but thus far, and a managerial duo once seemingly destined for the very top of the game are marooned in the same position they were a couple of years ago, but without the recent goodwill which saw them linked to almost every League One and Championship job going.

That is not to say that Portsmouth’s current problems are entirely down to the Cowley brothers. A lack of thorough and proper investment in the squad and heavy reliance on free agents is a constant source of frustration among much of the Fratton Park fanbase while there is an acceptance that predecessor Kenny Jackett far outstayed his own welcome on the south coast, meaning there was no quick fix to be had in Hampshire.

But for a managerial duo who had taken part-time Braintree Town to the National League play-offs, Lincoln City to two promotions in three years and an FA Cup quarter final and even saving a Huddersfield Town side destined for League One, this job should be relatively easy.

It is almost as if Batman and Robin have lost their superpowers, and these are just two men still wearing the outfit but without the magic to go with it. Not all who wear capes are heroes.

Portsmouth’s only victory since mid-August, somewhat startlingly, was a 4-0 thrashing of highflyers and fellow divisional big boys Sunderland. Since then, they have shipped four goals on successive occasions and needed a last-minute leveller against Accrington Stanley last time out to avoid a fourth defeat in five League One outings.

It is no longer a run of form and more just the accepted norm. The thrashings at the hands of Rotherham and Ipswich immediately after dispatching Sunderland with ease shows the Black Cats result as the exception to this season, not the rule.

In sharing four goals with Accrington, Marcus Harness’ late leveller brought celebrations in the away end at Wham Stadium, but the thank you mams are very much in reserve. It was a result which left Portsmouth one place behind Lincoln City, behind only on goal difference but the aptness of it is depressing for the Cowleys, for whom the plan upon leaving was to fast forward their own progression.

Portsmouth sit just three points ahead of Fleetwood Town in the relegation zone, the Cod Army having played a game less than Pompey, and Charlton directly below them are proof that reputation and history alone is not enough to succeed in this division.

It would likely take further calamities to see the Cowleys sacked from a second successive job, but that such a sentence can even be uttered is proof as to how far the brothers’ stock has fallen in the last two years.

While at Lincoln, they had their pick of bigger jobs, and if reports are to be believed, both Bristol City and West Brom, among others, were keen on giving the duo their biggest break. Huddersfield did appear an odd choice for when they did decide to leave Lincoln. While the Imps have since reached a League One play-off final playing some scintillating football and uncovering some gems under the stewardship of Michael Appleton, the Cowleys have won just 23 of their 69 matches since departing Sincil Bank. Not nice.

It is only natural that as you challenge yourself higher up the football pyramid that wins will slow down, but a near 50% winning record across a decade of management with Concord Rangers, Braintree and Lincoln has given way to 33% at Huddersfield and Portsmouth.

The brothers were dismissed at Huddersfield despite achieving the minimum objective of keeping the West Yorkshire side in the second tier due to creative differences between themselves and the Town hierarchy. It was little surprise. At Lincoln, the Cowleys recognised the importance of changing the ethos of the club from top to bottom. It was necessary to see a once proud Football League club bring to an end a run of six consecutive bottom-half finishes in the National League.

That freedom to change the running of the club on and off the pitch was vital in seeing Lincoln’s rapid rise to League One and that FA Cup run while still a non-league club. Higher up the pyramid, no individual – or duo – would ever be given such carte blanche to change things so dramatically on the pitch, never mind off it.

Perhaps it is natural that the Cowleys were never supposed to rise so high as they once appeared certain to do. Maybe failing to take Portsmouth up to where they wish to be is not what’s in the masterplan for these brothers. Their greatest successes started in non-league, and working with the underdogs has served them so well.

In time, their harsh Huddersfield dismissal and likely deserved ending at Portsmouth might be seen as small chapters in a bigger story as they rediscover their niche. Back below the club they left in search of bigger and better things two years ago, perhaps it is time to admit that Danny and Nicky Cowley are retreating to where they belong. That isn’t necessarily a bad thing.