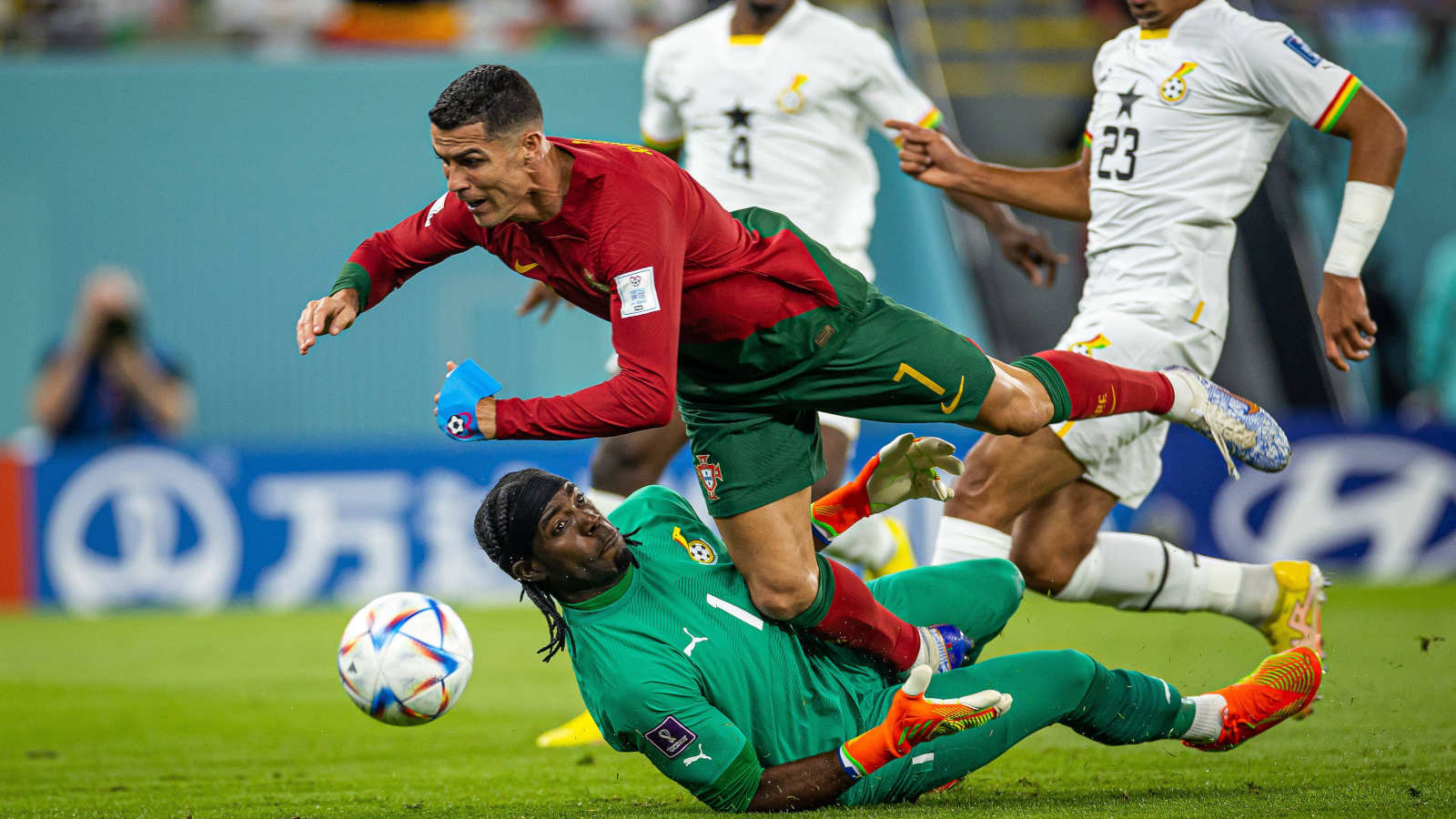 Portugal beat Ghana in a game in which all the action was packed into the last half-hour, and they almost dropped two points at the death.

So Portugal are up and running, but this didn’t happen without a fair amount of wheezing first and some butterflies in the stomach at the end.

For almost 75 minutes against Ghana they were pretty tepid, a goal up 20 minutes into the second half thanks to a penalty kick that came about from a rash tackle, with two goals in three minutes, scored by Joao Felix and Rafael Leao, to eventually see them home by what should have been a comfortable margin.

But even after all that, a second Ghana goal and nine minutes of stoppage-time left them hanging on for a win that they had several opportunities to coast towards, and in the very last seconds, they might even have dropped two points when a sudden and very unexpected chance opened up for Ghana which ended in a slip and some deep Portuguese breaths.

Ghana have had an up and down sort of year. At the very start of 2022 they flew to Cameroon for the African Cup of Nations and promptly finished bottom of their group, drawing with Gabon and losing to both Morocco and Comoros. Having sacked their manager and replaced him, they returned to competitive action at the end of March in the CAF qualifiers.

It’s fair to say that they qualified by the skin of their teeth. They’d won their group the previous November by one goal on goals scored from South Africa, after tying with them on both points and goal difference and then beating them 1-0 in their final match.

In the play-offs under new head coach Otto Addo, they followed a goalless draw in Kumasi with a 1-1 draw in Abuja to secure their place at the finals.

The pre-match attention, of course, had been about a certain player and his departure from a certain club which soon afterwards was put up for a certain financial transaction. Were the Portugal team still on speaking terms? Was there a chance that the dressing rooms were a silent and moody place with a heavy atmosphere, Cristiano Ronaldo and Bruno Fernandes occasionally glowering at each other over the top of their newspapers?

Portugal have qualified for every World Cup since 2002 having only ever done so twice in the 20th century, but since reaching the semi-finals and losing to France in 2006 they haven’t got past the second round of the competition in three attempts.

Meanwhile, for all the talk of breaking men’s records for scoring in five tournaments, even now he’s only scored eight goals in the World Cup finals, three of those coming in one match against Spain in 2018. That’s half the record of 16, held by Miroslav Klose.

But there’s always been a slightly cursed air to his international career. When Portugal did reach the final of a major tournament at Euro 2016, he was substituted after 25 minutes and left the pitch on a stretcher.

And now, at 37 years old and assuming it inconceivable that he could still be going to the USA in three and a half years’ time, here’s his last chance at glory in the one competition that has eluded him.

Twice in the opening quarter of an hour, he had chances to start writing the next chapter of his heroic struggle but twice they were spurned, first by a leaden-footed first touch that took the ball into the grateful smothering arms of the Ghanaian goalkeeper Lawrence Ati-Zigi, and the second with a far post downward header that skidded wide of the post with an open goal more or less in front of him.

Later on in the first half he had a goal disallowed for a nudge on a defender in the build-up that sat right on the fence between foul and not-foul.

But otherwise, it was a pedestrian first half, the type that has you wondering whether the players have already started time-wasting when they’ve only been playing for 10 or 15 minutes. Ghana seemed limited in ambition – they hadn’t had a touch in the Portugal penalty area by half-time – but for all the chances they faced they seldom seemed under intolerable pressure and their defence held its shape fairly comfortably. Portugal’s movement was largely predictable. They dominated possession without dominating the game.

Midway through the second half, with the game threatening to fall asleep altogether, a gift from Ghana. Cristano Ronaldo was chasing the ball diagonally across the left-hand side of the Ghana penalty area when Mohammed Salisu went in for a somewhat foolish tackle, a slight tackle and just enough contact to earn a penalty kick.

There was little question who was taking it. 1-0 to Portugal. Somewhere, a critic was answered.

Well, for eight minutes, anyway. Not for the first time in the tournament, a warning shot had been fire when Mohammed Kudus had a long-range shot palmed away by Diogo Costa, but just a couple of minutes later Kudus was back on the Ghana left, putting in a low cross for Andre Ayew to score from close range to bring Ghana level.

Two goals in three minutes gave Portugal what looked like a game-winning margin. Joao Felix broke through and lifted the ball over Ati-Zigi to restore Portugal’s lead, and with Ghana pushing immediately forward in search of an equaliser it took just a couple of minutes for a beautiful through-ball from Bruno Fernandes to find Rafael Leao, who swept the ball in to double their lead.

A second Ghanaian goal from Osman Bukari and nine minutes of stoppage-time made the closing stages considerably less comfortable for Portugal.

Ronaldo had been replaced by this time, substituted with a couple of minutes to play, and in the tenth minute of stoppage-time Diogo Costa dropped the ball at his own feet to kill a few seconds, completely oblivious to the lingering presence of Inaki Williams behind him. Williams nipped the ball away but slipped himself at the critical moment and the ball was scrambled away.

If there’s a route to the latter stages of the competition for them, it more likely comes from Portugal players other than their captain. He had the savoir faire to pick up the penalty and the sangfroid to convert it, but otherwise, his performance was very much the same as before he left Manchester United.

It still seems difficult to believe that a European club with genuine interest in campaigning for major silverware would be interested in signing him.

It’s tempting to think that either of these two teams might have had the game sewn up had they actually started playing a little earlier. Both Portugal and Ghana seemed to play within themselves for more than an hour.

It made for an explosive last 25 minutes, but Portugal’s overall performance certainly didn’t instil much confidence that they are going to go very far in this World Cup. Ghana were no more than moderate opponents in this game, and they were one tiny slip from claiming a point from it.