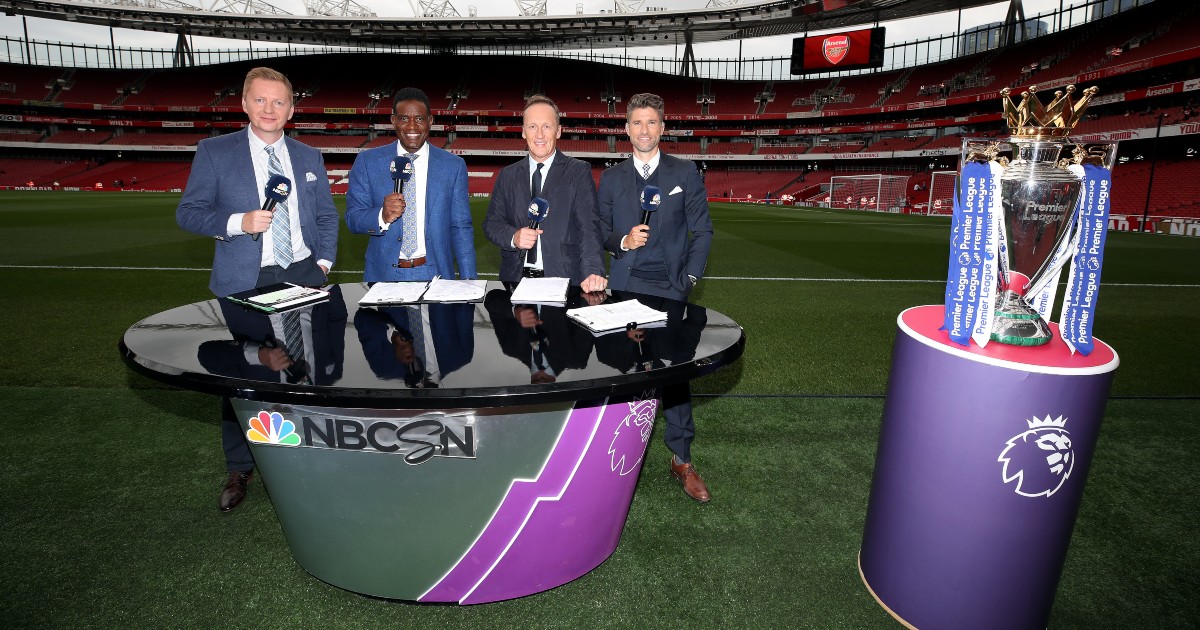 NBC have spent £2bn on a Premier League product nowhere near worth that much. But this is what Sky Sports did in 1992, only far smarter.

There have always been insular British and European snobs who have sneered at America’s love of soccer. You’d think that everyone would know by now that the word ‘soccer’ dates back to the 19th century and not some sort of Yankee terminology gaffe. It’s on a par with knowing ‘Every Breath You Take’ is a stalking song, not a love song, but some still play it at their wedding, apparently blissfully unaware.

As anyone who has spent any time in America can tell you, football fans over there are passionate supporters of the game, incredibly well-educated about it and keen students to a degree that would put many British fans to shame. We take it all for granted. They don’t. They have the flared nostrils and wide eyes of the evangelist. Even so, it has always been a sports niche and to be fair, that’s what many enjoy about it. Soccer was the equivalent of liking an indie band, buying their white label, red vinyl 10″ EP before they were signed to a major label.

However, the new NBC/Comcast $2.7billion rights deal may finally push the game more into the mainstream. There will always jocks who think the game is an unpatriotic effeminate sport for nancy boys and girls and the fact the USA women’s team has been so politically active has, in some rabid quarters, equated soccer to some sort of socialist insurgency. But America, like England, is angry with itself.

A decade ago, the deal was worth $60million per year, $150million in 2015, but has now bounced up to $460million per annum. At $1.2million per game, per year (they have the rights to show all 380 matches), it shows how important a product the Premier League is now considered to be stateside.

However, this isn’t because in raw numbers it is especially popular and what’s more, the audience is not growing exponentially. It’s reported NBC averaged 879,000 viewers for its free-to-air games, just 2% up year-on-year, with eight matches topping a million last season. In a country of 330 million people, that’s still quite niche. For perspective, the Super Bowl has over 100 million viewers, but a better comparison is Monday Night Football with around 17 million. We need to set the 800,000 viewers against that.

So why the big new money?

Just as is the case in the UK, the Premier League has financially benefited from being in the right place at the right time for the broadcaster’s aims. When the league was formulated, Sky (who are now owned by Comcast) was at the outset of establishing what we used to call satellite TV and used football as a loss leader to pull in punters for their wider services. Despite small audiences and losses, its reputation has become so wedded to the Premier League that it has to retain the broadcast rights at all costs.

BT Sport did basically the same thing when they got involved. Others such as Setanta and ESPN had a go, but couldn’t justify the losses and bailed. BT Sport has lost £2billion as a football broadcaster by paying way over the odds for something typically only a few hundred thousand people will pay to see.

Sky amortises the losses across its entire sprawling network. When Comcast bought Sky, they had 43 million subscribers (many of whom won’t subscribe to football) across Europe, which boasts a 746 million population. Even taking into account multiple watchers per household, broadcast football is not as popular as I think we all assume. The most popular football, yes, but not the humongous beast it sells itself as. Never forget that.

Much is sometimes made of the nature of football’s audience being valuable to advertisers, but as BT Sport will tell you, in the UK at least, advertising revenue doesn’t wipe out their broadcasting losses.

But in the USA, just as it was in the UK back in the day, football is being used as a gateway drug by Comcast for its streaming service, Peacock. They’re using live soccer (and other sporting events) to be different. To mark out their territory as Not Netflix. So this new deal is an investment in the future. It is grabbing the football broadcasting real estate for six years to better position itself in the wider streaming market of the future. In that sense, it is doing what Sky did in 1992.

But this is a much smarter approach than in the UK and Europe. The partnership with NBC which mixes paywall TV with free-to-air, is to help garner the widest audience for football, get them hooked on it, shuffle some towards a subscription, before at some point in the middle-distance, when audience growth is established, shutting most or all of it behind a paywall. This is a forward-thinking move and is one that, had it been followed in the UK and Europe, would’ve seen the audience for paywall games far larger than it is now. Because when you exclude people on economic grounds from the get-go, you divorce them from the soap opera and they don’t feel compelled to stay up to date.

It still isn’t too late for a mix of free-to-air and paywall football to become the UK and European model to grow audiences that have stagnated. I fear, however, that everyone in the business here has grown fat on exclusivity’s flattery and think of free-to-air as merely giving their asset away instead of thinking of it as an investment. In USA, they’re not so dumb.

The Premier League has been lucky in America. A few things fell into place for it nicely. The fact the games are broadcast in the morning in the USA means they’re not up against more popular sports. It is also a 10-month season, thus fills the majority of a year’s scheduling. Advertisers also like US soccer fans as a more wealthy economic demographic than is typical in Europe.

On top of this, the fact that it has become the richest and most popular league in itself makes it attractive to viewers, perhaps especially in a country not known for being shy about its love of money. Its claims to have all the best players are obvious hyperbole, but it pays the biggest fees and wages. You pay the best the most, right? So this must be the best league. That is how the logic goes. The league encourages that sort of thinking.

Even the league’s fondness for allowing the money of sinister owners to buy up chunks of English football’s assets adds to the newsworthiness. Clubs owned by blood-stained autocratic states and fascist petro-dollar billionaires is great content.

This has become a self-feeding circle and it has made the league way more valuable than the numbers it attracts to watch it would suggest it should. Its visibility and global reach is undoubtedly impressive, its actual paid-for viewing numbers, less so, but it has always cleverly and successfully conflated those two things, as though they are one and the same thing when they are not.

But while the pompous claims for the league’s quality may grate somewhat when you’re nodding off in front of a Norwich game, the fact remains it is a very useful tool in the ongoing attempt to grow and future-proof these broadcasters’ market share in the age of streaming.

However, we can be sure that owners of the big clubs will look at this deal, will rightly feel it is leveraged on the back of their organisation’s pulling powers, that lesser clubs in the league are poncing off their glamour and will wonder how much money they could generate for themselves with something not called a super league that actually is a super league.

And everyone knows the answer to that: bloody loads. That is the direction in which we are, albeit covertly, heading. Hopefully sooner than later, we’ll reach that destination.