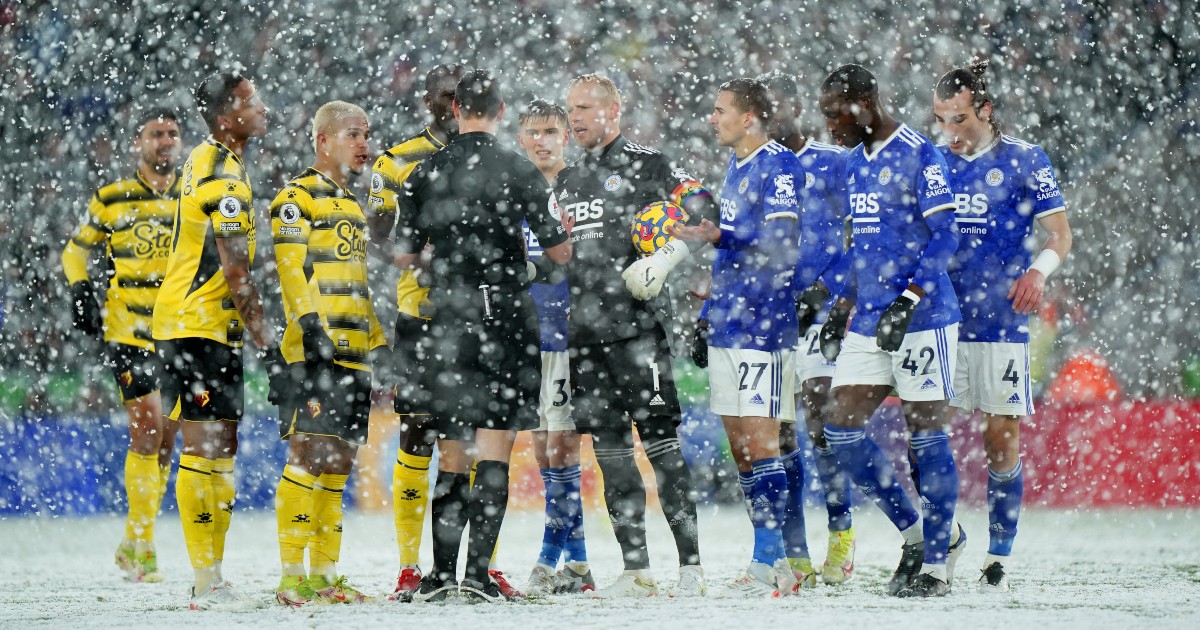 Leicester and Watford were playing out a pretty decent game but the snow descended in the second half and made it an entirely different sport.

It was during his only full season as Leicester manager that Claudio Ranieri first tried to culinarily incentivise his players into keeping a clean sheet. The promise of pizza in September 2015 came after the Foxes started their title-winning season with three wins and two draws, but seven goals conceded. A 2-2 draw with Stoke, 5-2 humbling at Arsenal, 2-1 win over Norwich and 2-2 stalemate against Southampton followed as the dough was kept on hold. By their tenth match, the defence finally held out to keep Crystal Palace at bay.

The Italian immediately tried the same trick upon arriving at Vicarage Road, only for Liverpool to decimate them in an October food fight. Five games later, and the wait for a shutout continues.

That Liverpool were the last team Watford kept a Premier League clean sheet against feels entirely in keeping with this thoroughly backwards world. Beating the reigning champions 3-0 during those far simpler times is a victory from a different era in every sense.

What Ranieri has harnessed in Hertfordshire is a latent goal threat. Watford have compiled a squad of wonderful attacking talent that Xisco Munoz never could exploit. Eleven goals in six games is a phenomenal return under Ranieri, even if it does come with a greater tendency to capitulate further back.

His first return to the King Power Stadium as an opposition manager since furnishing Jeffrey Schlupp with a Premier League winner’s medal was not short of such entertainment. The hosts took the lead when William Troost-Ekong defied literally the only rule in football by letting a long ball bounce, allowing James Maddison to sneak in behind and volley past Daniel Bachmann. Josh King converted a penalty to equalise after Wilfred Ndidi felled Emmanuel Dennis. The port and skittles vodka then kicked in as Jamie Vardy rifled through his repertoire to find a phenomenal finish from a tight angle and a near-post header from a free-kick.

With a two-goal lead at home to a newly-promoted team, Leicester should have been safe. But their own fragility combined with the whims of the weather for a potentially lethal concoction.

The snow cascaded in the East Midlands to the extent that the ball was no longer to be trusted. Players under and overhit their passes, trying and failing to reconfigure their angles to suit the conditions. The camera operators jerked and jolted in search of the ball. Low-resolution streams were rendered obsolete. It became a different sport that none of these elite athletes were particularly adept at.

It transformed ultra-confident, uber-talented footballers into anxious, nervous wrecks for a moment. Timothy Castagne notably struggled. Dennis capitalised to score from his dallying in possession but Watford really ought to have taken advantage of another of the Belgian’s earlier mistakes. Cucho Hernandez bore down on goal, stepped inside the defender and stood just behind the penalty area with one covering defender and Kasper Schmeichel edging off his line. The Watford forward shirked the chance and passed it in the rough direction of Joshua King to his right, who had to take a touch because of the circumstances and thus the chance was gone.

The match had long been preposterous by the end, with Ademola Lookman even deigning to take a couple of moments to compose himself and keep his footing before tapping into an empty net from three yards. Harvey Barnes set up that goal with a glorious centre, having been reduced to runner-up in a sprint with Craig Cathcart shortly beforehand.

The snow, in that sense, was a great leveller. Fortunately for Leicester, they already had their two-goal cushion by the time the white sheets descended. The clean ones continue to evade Watford, who have only conceded one goal more than the Foxes after 13 games but are simply not quite as polished.