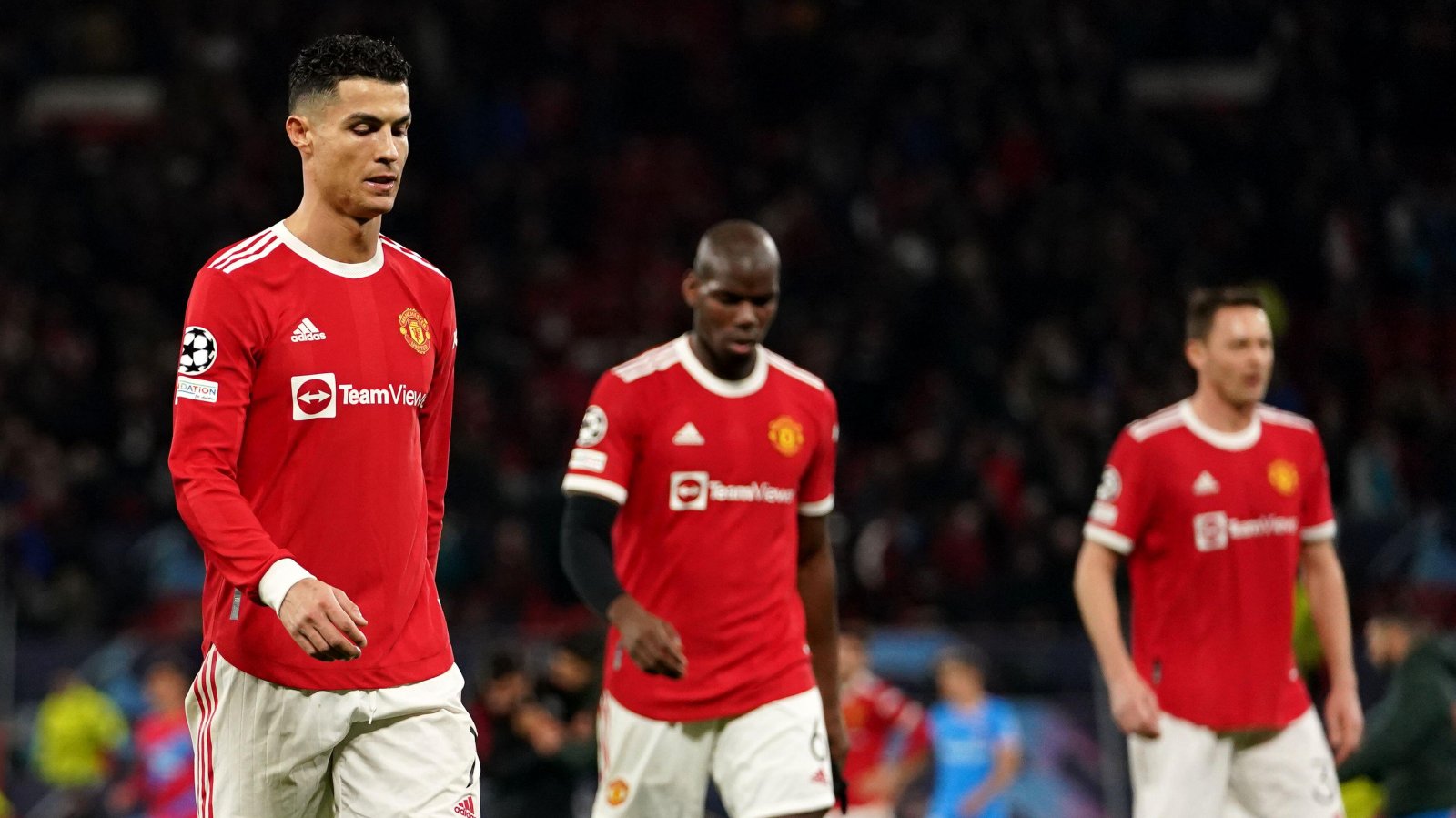 The Premier League losers hairdryer treatment is spared for Manchester United, Mikel Arteta, Norwich and Watford, but Burnley get sympathy.

The winners are here.

Manchester United
It is not a great sign when you shed your manager, assistant, executive vice-chairman, director of football negotiations, chief of staff, chief strategy officer, director of communications, chief scout and head of global scouting during a single season. Although it does neatly reflect Manchester United: a mismanaged club with no strategy that struggles to negotiate, communicate or scout effectively.

There is context to be considered but if Jose Mourinho can legitimately rank finishing second with this team as one of his greatest achievements, Ole Gunnar Solskjaer might consider retiring on a high. Manchester United were as close on points to champions Manchester City as they were seventh-placed Tottenham in 2020/21 yet there was a sense that something was quietly building at Old Trafford.

But that is a delicate art and the decision to entrust Solskjaer with making the next step was compounded by the arrival of Cristiano Ronaldo. It automatically rendered the careful reconstruction moot. The Premier League title became the express aim, a bare minimum. The equation of ‘runners-up + one of the game’s greatest players’ ignored a great deal of variables but that was the sum total of Manchester United’s hopes. Anything less would be a disappointment.

This represents rank failure: on the pitch, in the dugout and in the boardroom. Manchester United have at least acknowledged the dire need for reform throughout the club but there’s only so much credit you can give someone for sh*tting themselves eight times before considering changing their clothes.

Those convenient smokescreens of the captaincy and who the main problem is have helped obscure a mentally brittle and collectively fraught team, one which seems more obsessed with perception than reality. Harry Maguire backed himself to face Leicester when barely half-fit in October and it resulted in the first of many chastening defeats. At the other end of the spectrum, available players have put in a fraction of the required effort. Neither is healthy. The culture must change.

The appointment of Ralf Rangnick suggested a modicum of sensibility but it being to his least effective position summed up the whole debacle. Manchester United have needed a focused director of football for years. They identified one and made him interim manager turned hot-take machine, later to be part-time consultant on the side.

Manchester United have conceded four goals on at least six occasions. It is a humbling statistic and evenings such as those at Anfield in April, when Liverpool showed fitness-sparing restraint and Gary Neville praised a teenager for fouling the opposition because both he and his team were incapable of winning the ball fairly, should shame a once proud club.

Erik ten Hag should and – within reason – will be given time. Manchester United can hardly take a different approach at this point. They have reached what they hope to be their nadir and essentially need to be rescued from a mess entirely of their own creation. Acknowledging the need to rip things up and start again at least implies a degree of introspection and self-awareness. Seeing it through won’t come any easier.

Burnley
There are few touchier subjects in the English football pyramid than parachute payments but in this particular case, they might take on a more literal meaning. Instead of providing the financially advantageous springboard for a relegated club to immediately return from whence it came, it might be needed to slow Burnley’s descent. And even then, it may only be a temporary measure.

The situation is as dire as it was avoidable. ALK Capital completed their takeover of the Clarets in December 2020 through a leveraged buyout and the terms of a loan taken out by the owners include an early repayment clause of £65m. Some clubs can swallow such losses but the same tight budget and sensible profits that attracted venture capitalists to Turf Moor in the first place will not count against them.

Burnley are unlikely to bounce straight back up. James Tarkowski is among nine players whose contracts expire this summer. Sizeable wage cuts due to the Championship drop could see those other desirable member of the squad targeted in the transfer window. The state of managerial affairs remains as uncertain as the club’s own future.

The Premier League might learn from Burnley’s imminent plight not to permit takeovers which hamstring the club in question. The Clarets were operating fundamentally brilliantly, a shining light of sustainability off the pitch and relative success on it. But either not backing Sean Dyche in the market or removing him from his post was the first card in this pyramid to fall. No-one should feign surprise if and when the rest collapse.

Mikel Arteta and Edu
As was written in our January transfer window losers:

‘Arsenal have essentially cut weight for a bout of marathon boxing against at least three opponents. Their January inaction raises the stakes to almost uncomfortable levels with no margin for error. Mikel Arteta has to deliver Champions League qualification in May or any defence of his premature winter budgeting is rendered moot. It also places a ludicrous amount of pressure on the summer, when the fruits of this month’s labour must be harvested to produce a stellar window with few missteps, if any.

‘The most miserable doomsday prophecies are, as ever, born from transfer-induced hysteria. Arsenal won’t miss out on their season objectives specifically because of any of those departures, nor for their refusal to bring in another Denis Suarez or Kim Kallstrom. Even with Aubameyang, he has not played any of the club’s last ten games, not played well long before then and was thought to have been outgrown by the process during the recent winning run. But there is an undeniable sense that Arsenal may have made things far more difficult than they had to be. By Arteta’s own admission, making at least one signing “was what we planned”. The only thing he has brought in is a rod for his own back. He and his team are geniuses if it pays off; they will be aware of the consequences if it doesn’t.’

Mikel Arteta and Edu left no margin for error and no room for nuance. Their ruthless January squad cull meant Champions League qualification was no longer the aim but the minimum target. It was a calculated gamble and the numbers were unfortunately narrowly out.

It is a shame because Arsenal undeniably developed into a fine team over the course of the season. Their work in last summer’s window was close to transformative and that degree of focused excellence must be repeated over the coming months. Arteta brought the average age down and – perhaps not coincidentally – the ratio of p*ss-boiling celebrations up. Bukayo Saka and Emile Smith Rowe have ensured stellar representation of the academy. This young spine should be emboldened by their experiences both positive and negative.

But it all comes back to January. Tottenham shed the burden of Dele Alli, Tanguy Ndombele, Bryan Gil and Giovani Lo Celso, but crucially injected necessary impetus with Dejan Kulusevski and Rodrigo Bentancur. Arsenal went a bit too far in terms of the former and absolutely underdelivered on the latter. It cost them a Champions League chance that might not come so freely again soon.

Watford
The good news is that Rob Edwards has already had a positive start: his appointment before the end of the Watford season has afforded him plenty of preparatory time; the bar has hardly been set high; and Roy Hodgson’s claim that “I haven’t had a phone call” from his successor despite Edwards having been given his number almost a week ago has endeared him to an increasingly disillusioned support.

It is difficult to recall two worse mid-season managerial changes. Hodgson seemed either uninterested or simply incapable of cajoling performances or results from a scattergun squad. Claudio Ranieri summarily failed, exacerbating their innate defensive problems. This was a historically bad season produced by an eminently forgettable team.

The only hope for Watford is that Edwards can be given the sort of time and patience which few have benefited from at Vicarage Road. There are justifiable reasons for many of the departures but the Pozzos have employed 15 different permanent managers since their takeover in 2012 and only three – Gianfranco Zola, Quique Sanchez Flores and Walter Mazzarri – have lasted a full season.

Norwich
Dean Smith might not have read the room when pledging that Norwich “will learn from” the mistakes made this season. Fans who were fed the same line last summer about the missteps of 2019/20 will not accept it so readily this time.

It has been another abhorrent attempt at survival, with a horribly vague transfer approach leaving Smith and Daniel Farke before him at a distinct disadvantage. Norwich pride themselves on being one of the best 25 teams in the country – thus often being too poor for the Premier League but too good for the Championship – but this team would have struggled in the second tier and would be foolish to expect an instant return without putting in the work.

Everton
Even though disaster was ultimately averted, it makes the prior struggle no less embarrassing or damning. A team with their levels of investment should never be in such a position as to be rescued by a manager in his third job, whose core plan revolves around making the supporters like their team again.

It was an unusual year, very difficult. Although we know we have escaped an even worse scenario, there are several lessons for the future. Everton is a giant club and deserves to fight at the top of the table, for places in continental competitions and for titles… pic.twitter.com/iOxdysEzQi

Romelu Lukaku and Jack Grealish
The two most expensive signings in British football history. One ended as a world champion and Chelsea’s top scorer. The other claimed his first major honour with the Premier League title. But Lukaku and Grealish played a combined 106 Champions League knockout minutes and were awkward fits in their respective teams. The latter was even an unused substitute as Manchester City came from two goals down after 76 minutes to secure the crown on the final day. Next season must be better from both.

Steve Bruce
The only permanent Premier League manager not to win an actual match this season. Not a single person on this Earth remembers Francisco Javier Munoz Llompart exists but he won two from seven at Watford. Michael Carrick won a game!

The bacon
People tend to ponder ‘Why’s the bacon?’, but only one Premier League manager ever thought to ask, albeit in a slightly aggressive and startled manner, ‘How’s the bacon?’

Aston Villa
It’s a lot of money to spend and hassle to endure to come 14th. Aston Villa have not finished in the top half of a Premier League table since Gary McAllister carried them over the final stretch in 2010/11.

Rafael Benitez and Claudio Ranieri
The only two non-British or Irish managers to have coached four different Premier League teams probably won’t get the chance to extend that record. And barring pre-season catastrophe, Marco Silva should equal it next season.