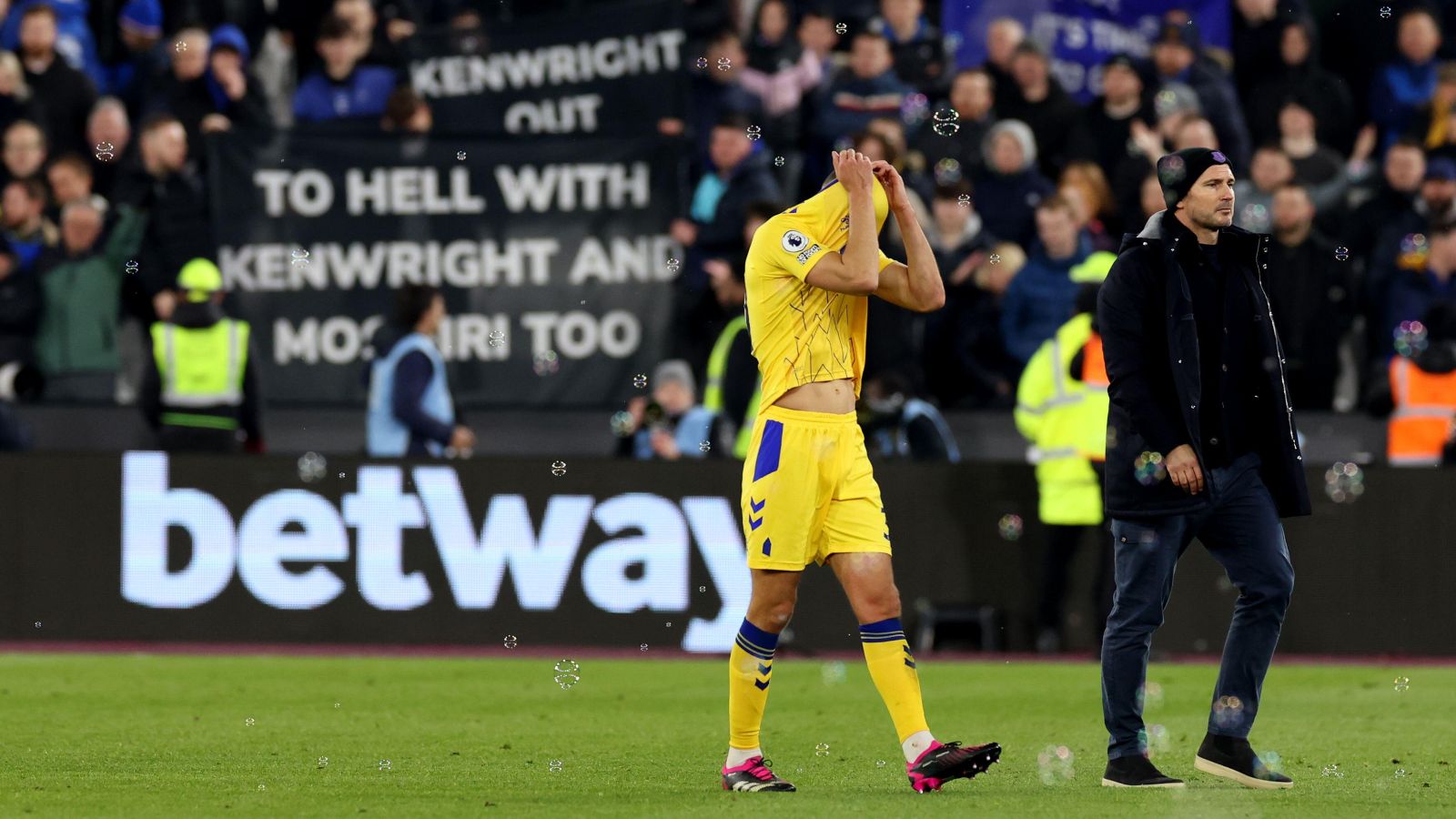 Everton are showing a little too much generosity to those around them on their way to the Championship. Nayef Aguerd and Unai Emery are leading revivals.

Arsenal
You can always get better in life, innit?

Nayef Aguerd
That late sweeping challenge which turned Demarai Gray from piercing counter-attacker into crumpled heap in the West Ham penalty area summed up Nayef Aguerd’s afternoon. It was his fifth tackle of a game in which he also won four headers and made 10 clearances to inspire a first Hammers league clean sheet since October. Ally that with his distribution, particularly of the long-range variety, and Aguerd is comfortably the best defender at the club.

The centre-half has still played more World Cup minutes for Morocco this season (354) than Premier League minutes for West Ham (345). The sooner that gap opens up significantly in the other direction, the quicker David Moyes’ position will be strengthened.

Unai Emery
Since Unai Emery formally took over Aston Villa on November 2, only Arsenal have collected more Premier League points. One point above the relegation zone has become three points off the European qualification places. It is a stunning turnaround.

The Spaniard’s tactical influence is clear, from the faith placed in Ashley Young to the successful introduction of Alex Moreno on the other side, and the focus on a more fluid and fluent attack. But the shift in mentality might be an even greater factor behind this improvement.

Newcastle
Only five clubs have ever had a better defensive record after 20 games of a Premier League season. Newcastle have not conceded more than a single goal in a league game since August (v Liverpool), have not conceded a first-half goal since August (v Wolves), were last behind in a league game in September (v Bournemouth) and have been trailing for just 81 minutes this season; Arsenal are next best on 89 minutes.

Only a fool would argue it has not come at the slight cost to the attack. Newcastle have scored four goals in five post-World Cup games, with three of those coming in their first match back against Leicester on Boxing Day. But Nick Pope, Eddie Howe and friends deserve immense credit for turning Newcastle’s perennial weakness into their main strength.

Riyad Mahrez with gloves
“I cannot teach him anything, he’s too good,” said Pep Guardiola in October, when Riyad Mahrez had scored a solitary Premier League goal and was sitting on the bench more often than he started. The implication was that the winger’s ability or tactical fluency is never in question, just his condition.

The World Cup offered a break Mahrez sorely needed. Six goals and three assists in eight games across three competitions since have returned the Algerian to his imperious, peerless glove-wearing form. It doesn’t feel like he is recognised as an all-time Premier League great – proper appreciation might only come after the fact – but he is behind only 51 players for goals and 27 for assists.

The Brighton succession plan
In theory, it should not be possible for a club to ostracise and then sell their top goalscorer mid-season, knowing they can essentially and seamlessly replace them with two players who were signed to no fanfare whatsoever. Kaoru Mitoma joined Brighton for £4.5m in August 2021 and Evan Ferguson made the move for a nominal fee in January of the same year. One went on loan while the other dominated the youth leagues. But no matter which trawler the Seagulls follow, it seems to result in success. That is by design and remarkable foresight rather than coincidence but either way it is refreshing to see a football club actually run competently.

Leeds’ new centre-half partnership
It rather sums up Jesse Marsch’s season that his fresh and imposing defensive pairing will have to be immediately changed for the crucial game against Nottingham Forest. The booking and subsequent suspension Robin Koch picked up against Brentford was the only misstep in a commanding display. With Max Wober alongside reading the game comfortably, Leeds looked more assured at the back than at any other point in recent memory. That Koch block on Rico Henry’s attempted cutback for Ivan Toney in the first half was ballsy and finally gives Leeds a tangible foundation to build on.

Craig Dawson
Only a wily veteran could time his arrival for immediately after a trip to the Etihad to face Erling Haaland. As long as Jose Sa stops passing straight to the opposition then Craig Dawson should encourage an instant improvement from that Wolves defence. Although it should probably be noted that the only Premier League clean sheets he has played a part in since October 2021 were against relegated trio Norwich, Burnley and Watford, or his incredibly blunt new club. Sure he’ll be fine.

Southampton’s home discomforts
There is ample opportunity to rectify the problem but Saints will go into their remaining home fixtures against Wolves, Leicester, Spurs, Manchester City, Crystal Palace, Bournemouth, Fulham and Liverpool knowing that St Mary’s is not currently a happy place for them to be. Their only home Premier League goals since the beginning of November have come at 3-0 down in separate games against Newcastle and Brighton. Their last clean sheet at home was in April. No side has conceded more goals nor accrued fewer points at home this season.

Nathan Jones will hope those flickers of recovery are not lost but momentum is fickle at the wrong end of the table and when James Ward-Prowse is the only Southampton player to score – disallowed or otherwise – in their last 531 Premier League minutes, there will be issues.

Marc Albrighton
Scored specifically one Premier League goal in 2020/21 and 2021/22. Will hopefully slow down now he has completed the strange but endearing hat-trick.

Jorge Valdano
That was for you, big guy.

It is a theme which can be extended to both Wolves (two wins in nine) and Leicester (two wins in eight), who collected their other victories in that run against the same Hammers which made such light work of the Toffees. With three points separating the bottom seven, Everton can hardly afford such generosity towards those around them.

A position of 16th with 19 points from 19 games, six points clear of the relegation zone with at least one game in hand on the teams below, was enough for Rafael Benitez’s sacking. It becomes harder with each match to justify Frank Lampard’s continued employment in 19th with 15 points from 20 games and a two-point gap to safety, beyond the basic theory that the top-flight’s most historically wasteful club simply cannot afford to get rid of the manager.

Not that it would solve all or even any of their problems. Everton are a mess from top to bottom. Club owner Farhad Moshiri was in attendance for the West Ham defeat and offered little during a snap interview afterwards but to say it’s “not my decision” whether Lampard goes. This is the same man who declared that “all the managers have been driven by the fans, not by me, initially,” earlier in the month. It is a sentiment Vitor Pereira would agree with but a damning indictment on the lack of leadership, accountability and expertise at Goodison Park. And that is what will accompany them down to the Championship.

Bournemouth
Those points dropped from winning positions are starting to rack up and prove costly. Bournemouth were on 1.18 points per game from 11 matches under interim management this season, compared to 0.4 points per game with a permanent head coach at the helm. Gary O’Neil was never the right individual for this task despite the bounciest of starts and the Cherries might have to come to that collective realisation soon.

His inexperience is only a problem because Bournemouth have chosen to rely on it. O’Neil is doing what he can in the situation but it was never likely to be enough. Only West Ham (62) have made fewer substitutions than Bournemouth’s 67 this season and while Nottingham Forest could make five changes to turn defeat into a spirited draw, their hosts brought Joe Rothwell off for Ben Pearson in a pointless alteration – they had long since decided to stop trying to keep the ball – and Siriki Dembele was given two minutes plus stoppage-time to make an impact. It’s poor squad management from the boardroom to the dugout.

Naby Keita
Liverpool really need him to be the midfield answer at least in the short term but every other game seems to only throw up more questions. While injuries and availability account for so much of his stop-start Anfield career, there is a nagging feeling that Jurgen Klopp simply doesn’t fully trust him. Those two things are likely connected and so a clean break would benefit all parties in the summer.

It looked like a classic case of right player, right place, right time and right manager when Keita joined. Liverpool even patiently waited a year for him, so desperate were they to secure the services of a midfielder seemingly built specifically for Klopp, signed in that period the Reds could do no wrong in the transfer market. But sometimes these things make no sense and the only remaining option is to move on.

Mason Mount
Although that’s probably not the way to prove you could be part of the solution.

Adama Traore
Had no shots, key passes or dribbles against Manchester City. That’s literally and specifically his thing.

Chris Wood
Blocked more shots than he had and only won two headers. That’s literally and specifically his thing.

Dave Tickner
A heroic effort, for sure.