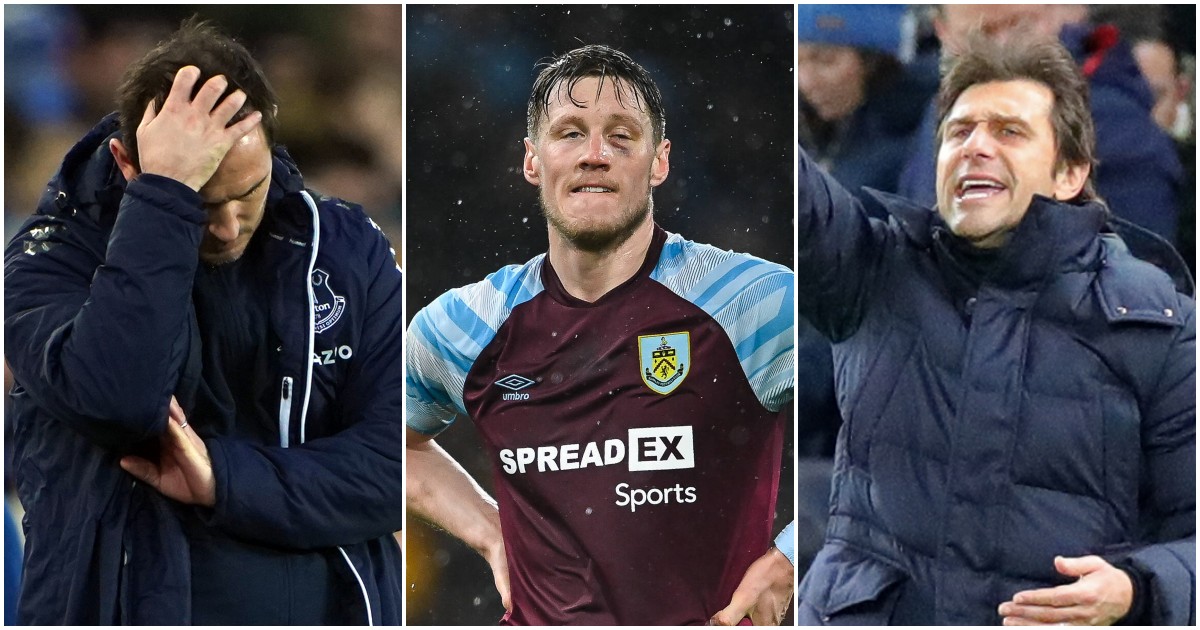 Eddie Howe loves a 3-1 win over Everton. Wout Weghorst is not what you might think. Frank Lampard is in trouble. Antonio Conte messed up.

Eddie Howe
For the first time in two years, Eddie Howe is out of the relegation zone. He last poked his head above the parapet in February 2020 as Bournemouth continued to take on more water while sinking towards the Championship. His role is reversed this time: Newcastle have momentum in their favour.

The gap to 18th might be just a point and a place but there is a spiritual importance to rising out of the bottom three, particularly in a home game which drags the beaten opponent further into the mire. Taking the seven sides from Brentford down into account, the Magpies are most clearly headed in the right direction.

How fitting that his last victory by more than two goals was a 3-1 win over Everton. Coming on the final day of the 2019/20 campaign, it was not enough to keep Bournemouth up and Howe was left wondering “where it was throughout the season”. He has seemingly landed upon the formula with weeks left to make it count this time.

The investment has undeniably helped. Kieran Trippier settled matters completely, Matt Targett revelled in the Allan Saint-Maximin slipstream and Chris Wood officially Led The Line, but Dan Burn was an unused substitute and Bruno Guimarares was restricted to a mouth-watering stoppage-time cameo. The rest of the ingredients were leftovers that Steve Bruce struggled to whip up into anything close to edible for the supporters.

The defence – own goal aside – was far sturdier. Joelinton continues to excel in midfield. Jonjo Shelvey is improving with each game, even if Anthony Gordon’s legs might disagree. Ryan Fraser scored his first goal since September 2019, which obviously came in a 3-1 win over Everton. Howe declared that to be “a huge moment in our season” but Bournemouth summarily failed to build on it. Newcastle should have no such problem.

Manuel Lanzini
It was an understandably disjointed performance in the circumstances and David Moyes really did get so very much wrong before and after the game against Watford, but one decision was quickly justified. The introduction of Manuel Lanzini traded a disappointing draw for a gritty win to renew their grip on the fourth Champions League place.

The Argentinean did nothing revolutionary but he carried out the attacking basics better than anyone. His ability and intelligence to float into specific positions to provide passing angles, turn and play through the lines was best highlighted for Jarrod Bowen’s goal, while the increase in tempo on the ball was notable. The team looked brighter and more positive for his mere presence.

Wout Weghorst
Sean Dyche described “the money” as “irrelevant” but two games into his Burnley career, Wout Weghorst is already proving to be remarkable value. The Clarets have evolved their attack with a younger striker at less than half the price they sold Chris Wood for.

In assessing their January transfer window, Dyche explained that Burnley had targeted “someone who we think can build into what we do and also give us a different edge and a different way of playing and effectiveness in attack”. Weghorst provided precisely that against Manchester United, reeling Harry Maguire and Scott McTominay into his trap before tempting Raphael Varane to vacate yet more space for Jay Rodriguez to roam. It was phenomenal centre-forward play.

But it was absolutely not what most would have been expecting from a 6ft 6ins lump sporting a black eye, whose announcement video teased the arrival of a foreboding dinosaur. Burnley knowingly played up to that trope: Weghorst had more touches (50) than all but two of his teammates and only one won aerial duel. Throw in three completed dribbles – no other player on either side managed more than one – and this was a balletic performance that belied the brutish stereotype.

Ralf Rangnick had identified the danger, marking Weghorst out as “physically present due to his size” but “not that much of a physical target striker”. The Manchester United interim coach knew the Dutchman was “more of a technical player” yet there was little he or his squad could do about it. They expected Zigic so did not seem prepared for Zidane.

Everything about Aston Villa 3-3 Leeds
Jacob Ramsey. Philippe Coutinho. Big Dan James up top. Tyrone Mings and Mateusz Klich having the most shots for their respective teams. Rodrigo pulling the strings. Raphinha taking a backseat and just enjoying the spectacle for once.

One suspects Steven Gerrard was subconsciously furious with Mings and Ezri Konsa competing to outdo each other in the incompetent centre-half stakes, but even he struggled to completely hide his giddiness at taking part in another “basketball game” between these two faintly absurd teams.

Norwich
There is an obvious disparity throughout the league in terms of games, but only five teams have played fewer matches than Norwich in January yet the Canaries sit in the top half of a nascent 2022 table. They have led for a combined 163 minutes in their last three fixtures against Everton, Watford and Crystal Palace, having done so for just 104 minutes of their previous 20 games.

Having been written off by most – present company very much included – it is testament to Norwich and Dean Smith that they remain in touch of the pack wishing to pull clear of trouble.

The Crystal Palace draw was perhaps the handiest indication yet of their development under Smith. The Eagles are the only team the Canaries have faced twice since changing managers, with Smith referring to December’s 3-0 Selhurst Park defeat as “a real low point” and “as low as we could have gone”. A hard-fought 1-1 draw against the same team shows that progress is being made.

Manchester City
Managed to essentially mask yet another win by playing on an otherwise ludicrously entertaining Wednesday. John Stones was very good at right-back, so that’s something.

Ralph Hasenhuttl
Please don’t go. But if you do then at least make sure James Ward-Prowse stays.

Patrick Vieira
Has played against Dean Smith and does not seem to be in danger of joining Rafael Benitez and Claudio Ranieri in subsequently losing his job straight away.

This is our first season under Vieira, with half a new squad, and we’re performing at this level already and have been from early doors this season. The plan is working, it doesn’t happen overnight. This is still just the start of something great at the Palace ❤️💙❤️💙 #CPFC

Frank Lampard
The match reports largely endeavoured to absolve Frank Lampard of any blame whatsoever. Some afforded him a passing reference. Martin Samuel of the Daily Mail wrote that the Everton manager ‘needs a stadium as united as this one, and players who will fight as Newcastle’s did’, while adding that the 43-year-old ‘looked thunder-faced’ as ‘there is nothing a manager hates more than surrendering a hard won lead so cheaply and swiftly’.

There is already a slight sense that Lampard is in another no-lose situation in the eyes of some; that Everton is such a basket-case club and no manager can possibly turn this ship around in time. But if any credit was justifiably doled out for the thrilling FA Cup victory over Brentford, then blame must surely be apportioned after losing to a team battling relegation.

That is the fate that Everton have now slipped into. They are in genuine danger after a fourth consecutive Premier League defeat and as pretty as they looked at times, there was little to assuage any growing concerns.

The defence looks particularly suspect. That much was true in the latter days of Benitez and it is an issue that Lampard never truly addressed in 18 months at Chelsea. While Dele Alli and Donny van de Beek will provide variation and skill in attack, the key will be in what can be coached and coaxed out of Jordan Pickford, Seamus Coleman, Michael Keane, Ben Godfrey, Yerry Mina and Mason Holgate, as well as January arrivals Vitaliy Mykolenko and Nathan Patterson if they ever do feature.

As it is, any expectation that simply removing Benitez from the equation and pacifying certain supporters with his replacement would solve the problems have unsurprisingly proven to be false. The goodwill and positivity has faded in record time. Everton are in this situation entirely on merit, sitting 16th having lost to the teams currently 17th and 18th over the last month. A weekend meeting with 15th-placed Leeds and old nemesis Marcelo Bielsa promises either the ultimate salvation or further misery.

Antonio Conte
“I think that we are improving in many aspects but then we are still too emotional,” said the 52-year-old who spent a fair while aggressively shushing anyone connected to Southampton with all the vigour of an overbearing librarian after Tottenham took a contentious lead in north London. Antonio Conte has perhaps been given a little too much leeway in charge of a club whose every deficiency and mistake is simply filed in a burgeoning folder labelled ‘Spursy’. But a little introspection would do the Italian some good.

He did little to address the midfield imbalance which swamped Harry Winks and Pierre-Emile Hojbjerg, nor was a solution provided to Emerson Royal and Sergio Reguilon being overloaded on either side. Armanja Broja also feasted on Davinson Sanchez as Conte watched with increasing incredulity.

The Italian spoke of “mistakes” that have to be corrected but he was just as culpable. Southampton smothered Tottenham, pressed them relentlessly and exposed their shortcomings. Conte was out-coached.

Brentford
Losing five straight games – six including the FA Cup – can never be sold as anything other than disappointing and worrying. In mitigation, each of those defeats have come to teams occupying a place in the top half, while Manchester City hardly enjoyed a home stroll on Wednesday. But Thomas Frank is yet to toast his new three-year contract with a victory.

Brentford do have a six-point cushion to the relegation zone, albeit having played more games than the six teams below and nine sides immediately above them. There is also solace in the fact that none of the six teams from 11th to 16th are in particularly good form and so the Bees are hardly the only side in danger of being dragged down.

The return of Josh Dasilva and arrival of Christian Eriksen might provide an impetus that no manager can manufacture. And as bad as their last five results have been, their next five offers a home game with a Crystal Palace team they are two points behind, matches against Newcastle, Norwich and Burnley, and a free hit away at Arsenal.

Brentford are hovering over the vague panic button; the next four weeks will determine whether it needs to be pressed.

Manchester United
They need a world-class striker: that much is true. But the demand to finally improve in central midfield and possibly even at centre-half persists. And all that naturally has to come after the appointment of the manager expected to oversee it.

Ralf Rangnick will likely consider it either not worth his time or beyond his capabilities. There has been an undeniable improvement at Manchester United – both tangible and intangible – since his interim reign began, but often the only thing worse than winning while doing the wrong thing is not winning when doing the right thing. Both are difficult trends to overcome. Ole Gunnar Solskjaer became the master of the former at Old Trafford; Rangnick already seems to be adept at the latter. Neither is particularly conducive to actual progression, nor is it acceptable considering the level of investment.

Champions League qualification remains a distinct possibility. Their form is generally positive. Performances are improving and it is no longer a guessing game trying to figure out what work is being done on the training ground. But the whole situation remains so volatile, one wrong managerial appointment or unsuitable signing away from collapsing in on itself again.