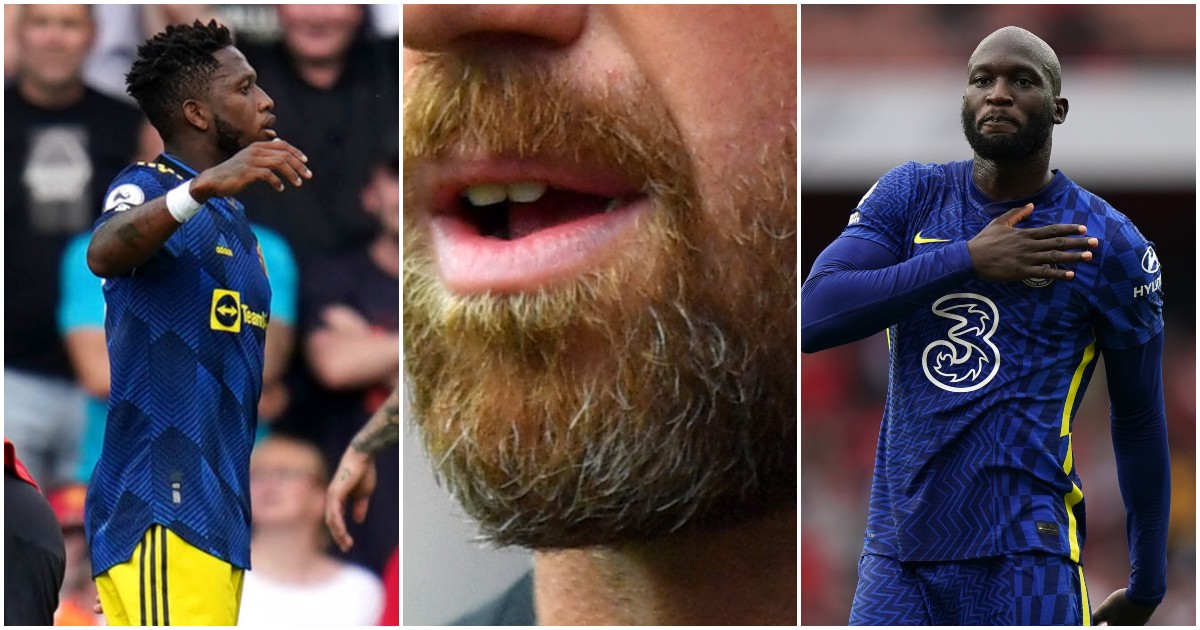 Chelsea have made a pragmatically brilliant buy in Romelu Lukaku. Pablo Mari certainly struggled, as did Fred and Steve Bruce.

Romelu Lukaku
Go back to when Romelu Lukaku first joined Chelsea and he was accompanied by a nickname: the ‘baby Drogba’. There are few more Drogba-esque things to do than scoring against Arsenal and few more ideal opponents for a player with Lukaku’s attributes. He was not being boastful when he described his performance as “dominant”.

If anything, the £97.5million man’s contribution on his second debut is not adequately represented by a solitary goal in a 2-0 win. A superb save from Bernd Leno denied him a second. Without being credited with the assist, Lukaku was pivotal when Reece James scored and when Kai Havertz nearly did. He has rarely been the battering ram strikers of his height are assumed to be, but Arsenal found him unplayable in the air and Lukaku excelled with his hold-up play, which suggested Chelsea’s band of No. 10s will all be able to play off and around him.

There was evidence of an early understanding with Mason Mount, plus the predatory streak to turn up in the six-yard box and open his account. None of which was remotely surprising. Chelsea knew what they were getting with Lukaku and if the price suggests he should be a risk-free purchase, the way he slotted straight in showed it. Lukaku looks a pragmatically brilliant buy.

Gabriel Jesus
Gabriel Jesus has felt like Manchester City’s forgotten forward this summer, mentioned less often than the departed Sergio Aguero and the yet-to-arrive, and perhaps never arriving, Harry Kane, rarely discussed amid the myriad options for places on the flanks after Jack Grealish’s arrival. A day when Grealish, Raheem Sterling and Riyad Mahrez all scored in the 5-0 thrashing of Norwich may feel typical: yet while Jesus failed to score, in a sense he was not overshadowed again. In creating three goals, a player who many saw only as Aguero’s understudy both illustrated he is a high-class alternative on the wings and that, while Pep Guardiola has rarely seemed to notice, he relishes a role on the right.

Meticulous as Guardiola usually is, when he has picked Jesus on the flanks, it has invariably been the left. And yet, as the forward has said over the years, he has often played for Brazil on the right and feels happier there. Jesus has never quite developed into the world-class striker many anticipated. Perhaps he has not been selfish enough, but the selfless streak made him excellent when he delivered a stream of inviting crosses against Norwich.

Graham Potter’s beard
Brighton won 23 percent of their league games in each of Graham Potter’s first two seasons at the helm. They have won 100 percent in his third. The difference could be attributed to the influential substitutions Potter made at Burnley, the return to the team of Shane Duffy, who scored against Watford on Saturday, or a kind fixture list that has pitted Brighton again two of the weakest teams; then again, those are the sorts of sides Albion beat too rarely as they showed a wasteful streak. Now they have beaten their expected goals in both games, with the usually profligate Neal Maupay scoring twice, and made the best start to a top-flight season in their history.

Brighton have stopped being Brighton. The only logical explanation lies on Potter’s chin. Potter is the Samson of facial hair, deriving his powers from his new beard. Carry on at this rate and it is only a matter of time before Arsenal offer £50million for Potter’s beard.

Danny Ings
It was not a footballing beauty contest, conducted 80 miles apart, between Aston Villa’s past and present but if Grealish scored what may forever remain the scruffiest goal of his career, Danny Ings got one of his finest. The acrobatic bicycle kick opener against Newcastle was rendered all the better by the rhyming build-up: Mings to Ings meant good things (and led to a 2-0 victory).

Villa’s Grealish windfall has been spent on very different players and, as a striker, Ings has less direct responsibility for replacing the departed captain than Leon Bailey or Emi Buendia. At 29, he is the most short-term of the signings whose combined cost approaches Grealish’s £100 million fee. But he has made an immediate impact. A debut goal, albeit a penalty in defeat at Watford, boded well for a player who can score in spurts.

Deprived of their talisman, Villa required early evidence that life after Grealish can offer ample benefits. Ings provided it and his goals may take some of the pressure off Bailey and Buendia. The precedent for one supersized sale and spending the proceeds on a group of players – think Gareth Bale and Luis Suarez – is that they can be lumped in together as failures and reasons for regression if there is not early evidence of excellence. If Ings is a flagship success and Villa acquire momentum, history may not repeat itself.

Tino Livramento
It’s only a matter of time before every team has a buccaneering right-back who emerged from the Chelsea academy. The production line that churned out Tariq Lamptey and Reece James also yielded Livramento and if Ralph Hasenhuttl was bold in preferring the 18-year-old to Kyle Walker-Peters at the start of the season, he has been vindicated. A man-of-the-match display for Southampton against Manchester United was evidence of rich promise.

Paul Pogba
If only goals assisted by Paul Pogba counted, Manchester United would still be the joint top scorers in the division (admittedly, if only goals assisted by Pogba counted, United would have been relegated with a record low of three goals last season). But Pogba brought the inspiration as United revived last season’s habit of coming from behind on the road to claim a point at Southampton. A second assist for Mason Greenwood in as many games was less spectacular than the first, but again suggested they have a promising partnership. Pogba became the first player in Premier League history to get five assists in the first two games of the season. Even more remarkably, Graeme Souness praised him.

Kostas Tsimikas
He was the forgotten signing, the defender Liverpool bought in a season when they needed very different defenders. Kostas Tsimikas’ debut year at Anfield brought just six minutes of Premier League football. Andrew Robertson stayed fit, unlike a series of centre-backs. Liverpool could have been forgiven if, instead of buying Tsimikas, they had spent the money on a replacement for Dejan Lovren.

A year later and there was a role reversal. Jurgen Klopp has a full complement of fit centre-backs and an injured Robertson. And, belatedly, Tsimikas has shown why Liverpool bought him. Robertson’s deputy has proved to be a like-for-like understudy, showing plenty of energy and delivering the sort of cross the Scot excels at for Diogo Jota to head in Saturday’s opener against Burnley. Robertson made a swift recovery to be back on the bench and will presumably face Chelsea but, belatedly, Liverpool have less need to worry if he is absent again.

Dimitris Giannoulis
Perhaps 2021/22 won’t go down in history as the season of the Greek left-back but they have had a rare prominence. Norwich against Liverpool was the first time both sides have fielded one: seven days later, they experienced wildly contrasting fortunes. While Tsimikas flourished, Giannoulis floundered, hooked at half-time after making Gabriel Jesus look the best Brazilian right winger since Jairzinho. Daniel Farke tried to be supportive but unhelpfully pointed out that Giannoulis’ immediate opponent one week, Mohamed Salah, got a goal and two assists and then Jesus set up two goals in the first quarter of the next. A Greek tragedy with a Norfolkian element is at least a twist on an old theme.

Pablo Mari
At least Giannoulis isn’t the only left-footed defender to make a shocking start to the season; Mari was arguably even worse than Ben White at Brentford. Separated from Arsenal’s ill new signing, isolated against Romelu Lukaku, there was nothing to obscure Mari’s failings against Chelsea.

The opening goal was doubly revealing: first Lukaku held him off with ease, then he brushed him off as they ran into the box, Mari falling and leaving the striker unmarked to convert Reece James’ cross. It was the stereotype of Arsenal as too weak and too ineffectual in a clip of a few seconds. The Spaniard bounced off Lukaku when he tried to get tight to him and yet was nowhere near him in the box: the worst of both worlds.

The only Arsenal centre-back whose reputation has been enhanced in their awful start to the season is Gabriel Magalhaes who, when fit, should over from Mari.  But Arsenal stockpiled fallible centre-backs to such an extent that despite bidding farewell to David Luiz, Shkodran Mustafi and Sokratis Papastathopoulos in 2021, they still have more in the team now.

Steve Bruce
Steve Bruce has years of practice at looking beleaguered. After the upbeat end to last season, the burst of five wins in eight games that meant Newcastle finished a healthy 17 points above the relegation zone has come the predictably downbeat start to this campaign. It is never a good sign when a manager is already complaining about officials in August and if Bruce may have had a valid grievance about West Ham’s penalty last week, it can be a default mechanism to excuse defeats instead of analysing them. Where Bruce is concerned, plenty of minds on Tyneside are made up anyway, and that attempt at persuasion has backfired. But the league table can quieten some of the dissenters. With Newcastle still pointless, it will not.

Fred
“When Fred scores we know everyone can score.” That was Ole Gunnar Solskjaer last Saturday. As Fred became the first player to score for two Premier League teams this season, he may have rebuffed his manager’s theory that he finds the net too rarely. If there was an element of misfortune – half-hearted as his challenge on Che Adams was, it scarcely guaranteed it would redirect the striker’s shot past David de Gea – it was nonetheless symbolic. The ball did not go in the direction Fred wanted often enough on a day when a player who is rarely in the final third or overly ambitious in his distribution misplaced a quarter of his passes.

The argument for Fred is that he offers solidity and picks out the better players. He did neither at Southampton. If his unconvincing partnership with Nemanja Matic enhanced Scott McTominay’s reputation, it also added to the argument for replacing a second defensive midfielder with someone more progressive.

Bruno Lage
Perhaps it was not the best time to face a predecessor who took Wolves to their highest finish for decades. That Nuno beat Bruno in the latter’s first match at Molineux can add to the impression that the newcomer is a downgrade. The statistics may suggest otherwise: Bruno Lage’s Wolves had 25 shots to add to the 17 they attempted at Leicester the previous week. The problem is that none have gone in. Adama Traore is the greatest culprit but he never had a record as a scorer to inspire confidence. The performance may offer grounds for optimism and, if they carry on creating chances, logically some will go in but with Manchester United next, it is very possible that Wolves will limp into the international break without a point. Factor in tough fixtures with a hangover from a dreadful 2020/21 and the time it can take for a new regime to have an impact and it is understandable. Equally, though, it would be inauspicious.

Old-fashioned shirt numbers
Sean Dyche picked a team wearing 1-11, each in the appropriate position for his shirt number. Burnley lost 2-0 in a game where the man of the match wore 66 which, coincidentally, is what you get if you add the first 11 numbers. Sometimes life is not fair (and also Ashley Westwood, the absent No. 18, is Burnley’s best central midfielder).