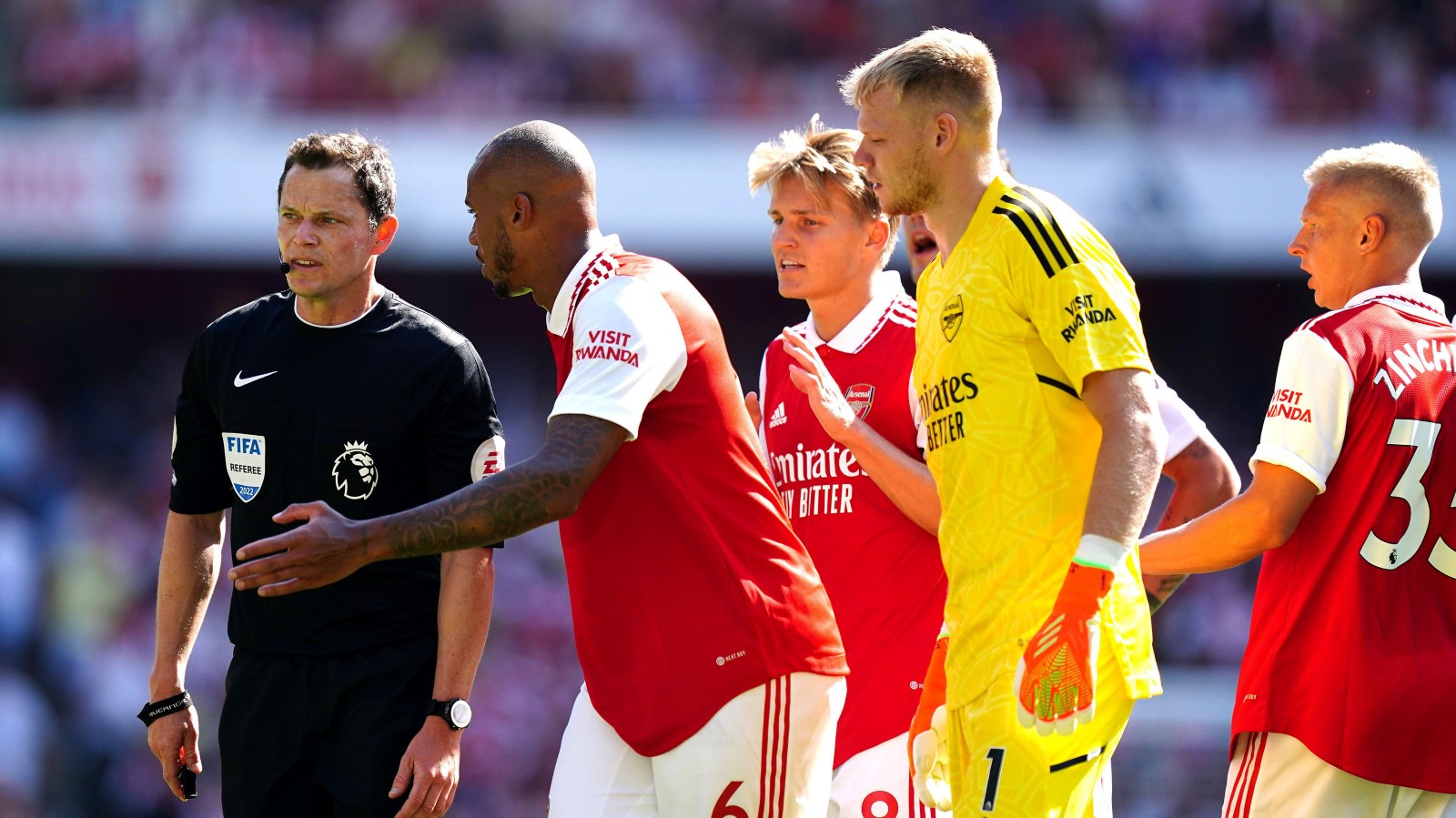 Spurs repeated the trick at Manchester City and the Arsenal conspiracy rolled on during a Premier League weekend that definitely happened.

Tottenham
It felt like Tottenham could hardly improve on that run of three consecutive Premier League games against Manchester City between August 2019 and November 2020, in which they had a combined 10 shots but scored six goals and won seven points.

With chief Citizen arrester Heung-min Son suffering a particularly debilitating state of flux currently, little was expected of the north Londoners from their trip to the Etihad.

But Antonio Conte masterminded a 1-0 victory with 3% possession and no shots to Manchester City’s 427. The hosts created opportunities at will but they could not breach Eric Dier’s resistance and failed to account for a formation featuring 10 right wing-backs; Djed Spence remained on the bench as an unused substitute.

There was an element of fortune as Manchester City grew frustrated after five minutes and sought to encourage an improvement by scoring an own goal and thus having a deficit from which they could engineer a comeback. But Tottenham stood firm and stayed on course to become the first team to go a whole season unbeaten without winning the title.

Alex Iwobi
Feasted on an Arsenal midfield of Granit Xhaka on an avoidable yet harsh first-minute yellow and Jack Wilshere, the coach making his second Gunners debut as a free agent in an injury crisis for full ironic value.

As Iwobi orchestrated the game, running further and faster than any player, tackling everyone on the opposition team at least four times and recording a perfect passing accuracy by spending 90 minutes pinging the ball at the brick wall that is Salomon Rondon, what was completely obvious to absolutely all of us in 2019 became yet more clear: Alexander Chuka Iwobi is a peerless central midfielder who will make a massive profit for Everton when Liverpool realise Jude Bellingham can’t lace the Nigerian’s boots. How unbelievable that Arsenal just did not listen.

Phil Jones
An unforeseen return to the team though it was, as Erik ten Hag forgot Christian Benteke had left Crystal Palace when leaving Lisandro Martinez out in an aerial battle-induced haze, Phil Jones acclimatised well to the challenge.

It is difficult to see how the 30-year-old can be dropped now and it ought to be noted that Gareth Southgate was in attendance at Selhurst Park; those winter plans were essentially rendered moot when Jones completed his hat-trick of overhead kick clearances off the line before releasing Antony to score with a no-look, 80-yard header off the floor.

Qatar have been warned.

The 6-6 draw was not particularly flattering on the defences but it was refreshing to see English coaches finally given an opportunity in the Premier League, like watching Alan Pardew take on Sam Allardyce and Sammy Lee in the mid-2000s.

Lallana is a surprisingly irate figure on the touchline and one can only hope Cherry Bear makes a full and swift recovery but the mascot probably shouldn’t have referred to the former Bournemouth Centre of Excellence member as traitorous scum. Lessons have been learned all round.

Serge Aurier
Didn’t take a single foul throw, score an own goal or concede a penalty. Didn’t play either but Steve Cooper will already know to take those small victories.

Southampton and Brentford
Feels like one of the most goal-festy fixtures in Premier League history. It probably helps that Ralph Hasenhuttl and Thomas Frank could swap places and still be happy with their lot.

Alan Shearer
Top work from the big man, who completed the hat-trick after his early-season Valery and Onana musical tomfoolery with a succinct assessment of the booking received by Liverpool’s debutant midfielder.

After Gary Lineker explained the intricacies of the Arthur Melo yellow, Shearer simply added: “Quite rightly.” It’s been a stunning season from the pundit so far.

Arsenal
The FA/PGMOL/Premier League/wholesale conspiracy continues to unravel. The evidence is increasingly difficult to ignore: referee Simon Hooper was born in Swindon but he once posted about Everton on a football forum in 2001; the father of assistant James Mainwaring is thought to have been a fan of Z-Cars; enough said about the surname of fellow assistant Mark Scholes the better.

With Mike Dean on VAR duty for the game, the Gunners stood no chance. No amount of lightbulbs could have helped Mikel Arteta in the face of such blatant northern favouritism from the anti-Arsenal cabal. His former club merely took advantage of the undeniable bias.

Brendan Rodgers
Another Leicester defeat, after which Brendan Rodgers did little to dismiss the rising Nigel Pearson speculation by blaming Danny Ward’s haphazard handling of an unchallenged cross, which should have been blocked by Daniel Amartey, who should have been supported by Youri Tielemans, whose accidentally piercing pass should have been finished by Jamie Vardy, on the fact that all football supporters actually want is shiny new signings to gawp at.

The news that first-team Foxes coach Kolo Toure is coming out of retirement does at least offer some hope for upcoming weeks, although there is a sense that Leicester will be back at square one when he is inevitably sold for £100m in January.

Steven Gerrard
Quite how both Leicester and Aston Villa both lost to each other at the King Power Stadium is a mystery. The unexpected presence of Demba Ba in the stands seemed to spook Steven Gerrard and Rodgers, whose subsequent slips on the touchline could hardly have imbued the players with confidence.

It was a chastening afternoon for the Villa manager, whose time in the East Midlands was spent being told he does not have as many Premier League title winner’s medals as Ritchie De Laet or Andy King.

That mood won’t have been improved by watching the new centre-half partnership of Tyrone Mings and Jan Bednarek. It was little wonder that Gerrard felt compelled to make a change on the hour mark. Emiliano Buendia is probably still wondering why it was him the manager tried to substitute when the Argentine was already sat on the bench but still, baby steps.

Erling Haaland
It is a dreadful reflection of Erling Haaland that he had minus four touches against Tottenham. Guardiola refused to even let the Norwegian take any kick-offs but the manager’s mission to make the forward the single most efficient, streamlined footballer in existence backfired somewhat. The jury is out as to whether Haaland truly can fit into this Manchester City system.

Liverpool
The mere suggestion that Diego Costa might be in the vicinity created an obvious panic in the Liverpool defence.

Trent Alexander-Arnold only spent 95% of the game in the opposition half in an attempt to assuage the threat. The deployment of James Milner at centre-half to nudge him closer to the accolade of having played in every possible position looks like a miscalculation in hindsight. His relationship with partner Virgil van Dijk was already strained and the Dutchman seemed understandably confused at the tactical decision to use a defensive line so high that it camped on the edge of the Wolves box.

That Adama Traore was the player so often tasked with leading counter-attacks was Liverpool’s saving grace. Even after another draw, it really is starting to feel as though their points don’t actually mean more at all.

Jurgen Klopp
Frustration is high at Anfield but there was no real need to call Des Kelly a bad meff and blaming more dropped points on global warming and the fact that some shops have put up their Christmas decorations was questionable.

Chelsea
It was brave and innovative of Graham Potter to request that every Chelsea player attempt to grow a full beard in the roughly 44-hour period from his appointment to the game against Fulham.

The tactic suited some. Cesar Azpilicueta desperately needed the rebrand and looks phenomenal, Christian Pulisic’s confidence seemed to have been transformed and speculation was mounting that Marc Cucurella is follicly challenged.

But it laid bare the challenges of others, with Raheem Sterling and Thiago Silva’s efforts notably patchy. The only relief is that N’Golo Kante has a few more weeks to get that oil rubbed in because that is the next Chelsea crisis just waiting to happen.

West Ham and Newcastle
After the debacle of last week and the subsequent official admission that they had both fallen foul of VAR mistakes, perhaps it should come as no surprise that West Ham and Newcastle spent the PGMOL derby with all 22 starters, the rest of the matchday squads, the managers and the coaching staff carving out ‘THE MIKE RILEY, THE’ in the London Stadium turf.