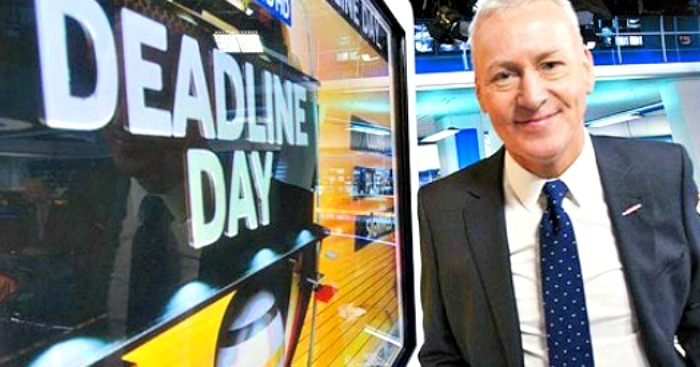 It was an amazing weekend of football wasn’t it? All those goals, all those mad results, none of the defending? We all enjoyed it, apart from Liverpool and Man United fans. But even they at least got the vicarious thrill of seeing their bitterest rivals take a gloriously silly and unexpected thrashing. Quite literally everyone was happy. But wait, who’s this barging in, harshing everyone’s buzz, swinging its dick around and trying to grab all the attention literally the very next day?

This week’s prick is the absolute arsehole of a damp squib of a transfer deadline day that had absolutely nothing to offer yet still spent the whole day shouting “LOOK AT ME! LOOK AT ME! I DONE A GUFF, WAH WAH WAH!” like an especially needy toddler or President of the United States. Prick.

More what it hasn’t done. Deadline Day has quite literally never delivered close to a four-goals-per-game average across four matchdays like the actual football is doing right now. Yet it still thundered in, wearing its novelty tie and loud shirt and honking its horn, utterly convinced people cared when we could all instead have spent a very enjoyable three days discussing which Manchester United and Liverpool players were the most fraudulent and pondering whether Actual Everton might actually genuinely win the actual league. These things are all far more fun than waiting until midnight to find out if Ruben Loftus-Cheek really is sufficiently lazy to join Fulham and work under Scott Parker rather than go to the effort of having to move in order to play for a club or manager that aren’t irredeemably bobbins.

Additionally, while blaming the concept of Deadline Day itself for Sky’s decision to inflict an entire hour of Two Redknapps and a Jim White on a population that has already suffered enough is harsh, I’m still going to do it.

And even when Deadline Day finally did deliver a transfer of genuine significance, it was one that sent literally everyone (including me, also a prick) into a frenzy of bad puns which ultimately just added to the whole awful Colin Hunt office joker vibe.

The only real alternative to Deadline Day is just transfers happening (or not happening) all the time and permanently getting in the way of actual football, which on balance is probably worse than getting all the nonsense out of the way on one dreadful prick of a day like ripping off a Band-Aid of bellendery.

Luckily, there isn’t another Deadline Day now for *checks notes* nine days? Wait, what? Really? Oh for fu… At least that one’s only a domestic one. It will more accurately be Deadwood Day, as teams who’ve spent vast sums of money after pleading poverty for six months realise they now have 427 players in their squad. And at least it happens at the end of an international break rather than on the back of one of the greatest ever days of Barclays. But this concertinaed season also means the January window is already just around the corner. On this accelerated dark timeline on which we are all forced to exist, we are already only 12 weeks away from Manchester United trying to sign Jadon Sancho for a bag of balls and a tracksuit again.

Pretended to be all magnanimous after giving his old club a right old thumping, even going as far to say the referee was right to have mercy on poor little Manchester United and not send off any more of their players who were simply unable to cope with the wave after wave of attack from his Great Entertainers, tried gamely yet failed to conceal an understandably smug smirk, gave Solskjaer a lovely little alpha pat on the head while absolutely Fleabagging the fourth wall.

🗣️ “I can imagine tonight he is not going to sleep very well.” pic.twitter.com/o9HDW6IEam

It’s the primary reason we love him with all our heart, but Erik Lamela is definitely a prick; Harry Redknapp’s entire SSN stint, specifically his predictably enlightened views on Sergio Romero’s wife daring to have an opinion; Arsenal spending £45m on a footballer the same day they let Gunnersaurus go, scoring their daftest PR own goal yet while simultaneously providing the assist for Mesut Ozil to nod home at the right end.

I was so sad that Jerry Quy aka our famous & loyal mascot @Gunnersaurus and integral part of our club was being made redundant after 27 years. As such, I’m offering to reimburse @Arsenal with the full salary of our big green guy as long as I will be an Arsenal player… pic.twitter.com/IfWN38x62z