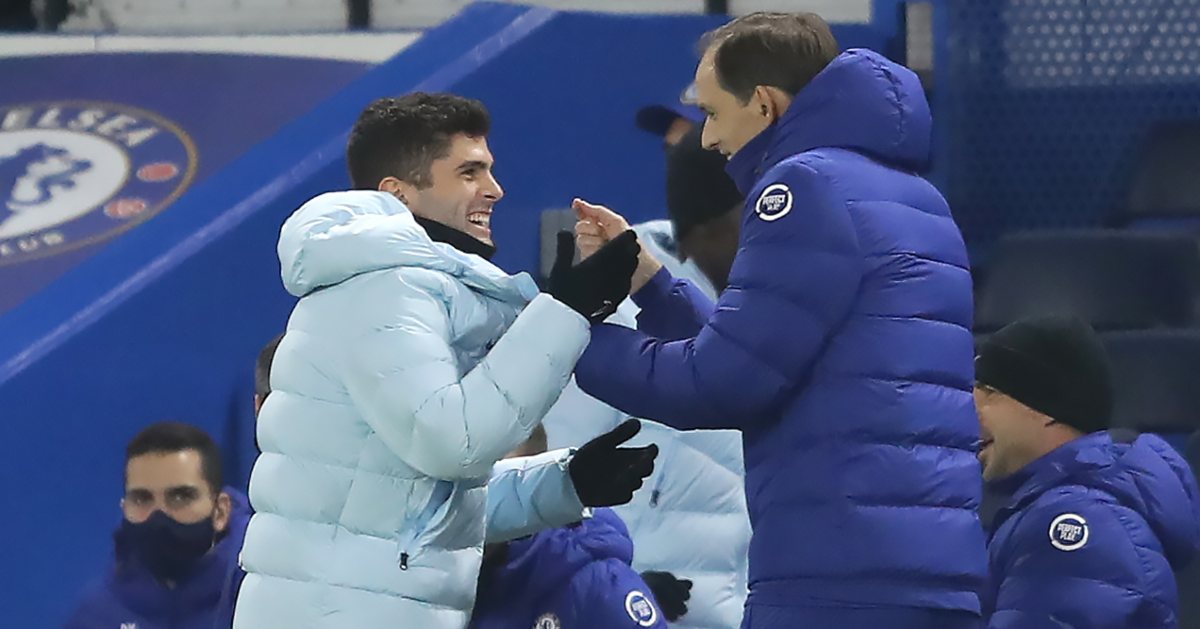 After just 11 games in charge of Chelsea, Thomas Tuchel has handed at least two starts to 20 of the 25 members of his squad. There have been clear winners as a result of his appointment – Callum Hudson-Odoi, Antonio Rudiger, Cesar Azpilicueta, Marcos Alonso – but very few losers.

Third-choice goalkeeper Willy Cabellero has understandably gone unused; Emerson, Billy Gilmour and Tino Anjorin have only featured in the FA Cup win over Barnsley, but it’s Christian Pulisic – the difference-maker when fit for Chelsea last season – who is now cause for concern, particularly amid reported interest from both Liverpool and Manchester United.

Tuchel was eager to explain the American’s lack of game time after the Everton win, which saw Pulisic make his seventh substitute appearance to take his tally of combined Premier League and Champions League minutes to just 137 under the German.

“I can say nothing else but good things about him. Maybe his biggest problem is that I know him from Dortmund and I think he started only in the cup games. It is my responsibility and it is a bit unfair but I know what impact he can have in the last 20 or 30 minutes. He was a bit unlucky in the last few games. It isn’t a lack of trust or quality, it is just that he will have to be patient.”

There are a few things to explore here, ending in a promise that patience will prove to be a virtue, but the other points won’t necessarily allay Pulisic’s concerns, beginning with the familiarity from their Borussia Dortmund days.

Tuchel posited that their previous was Pulisic’s “biggest problem” – a statement that can be taken to mean one of two things. Either Tuchel knows Pulisic isn’t good enough to play for Chelsea having coached him at Dortmund, or it’s affirmation of an understandable, very deliberate ‘feeling out’ pecking order, with the player Tuchel knows best right at the very bottom.

Given that Tuchel gave Pulisic his first start for Dortmund as a 17-year-old and has frequently praised both his skill and commitment, the former notion can be dismissed, but the latter won’t make Pulisic – who probably expected a touch of nepotism – feel a great deal better.

Tuchel made a big thing of his reintegration of fringe players when he arrived at Stamford Bridge, ensuring all members of the squad felt important in an attempt to mimic Pep Guardiola’s incredible trick of keeping everyone happy. And he’s done so masterfully thus far.

Chelsea’s flashy summer signings – bereft of all confidence when Tuchel came in – have been given opportunities to impress, adapt and attempt to rediscover their form without reducing the overall effectiveness of the team, and side-lined individuals have been brought back into the fold to put pressure on those who thought their positions were secure.

It was Lampard who said (ironically in regard to Pulisic) that he wanted his players “on edge” in terms of selection; to create an environment in which they must outperform a direct rival to earn their place in the side. Tuchel appears to be finding that balance – one that Lampard never quite struck – between competitive desire to play and downright sulking.

But in this bid not to play favourites, to prove his trust in the Chelsea youth and to showcase the worth of £220m of summer investment, the player who could be construed as a favourite, who wasn’t left out in the cold by his predecessor, who’s not English, wasn’t bought in the summer and generally seems like a nice guy unlikely to kick up a fuss, was the obvious choice to leave hanging. What will worry Pulisic is not that Tuchel doesn’t trust in his ability but that he apparently sees him as surplus to requirements despite the crucial nature of every game Chelsea play in their battle to make the top four.

Pulisic has also suffered – and may continue to suffer – from his Tuchel-appointed super-sub status. It’s easy to see why Tuchel likes him as an option from the bench, but having a great impact “in the last 20 or 30 minutes” is not the kind of ringing endorsement most footballers would enjoy hearing; the same traits that make him an excellent substitute would also be very useful from the start, particularly against the packed defences they are likely to be up against more often than not. Despite all the money spent and the progress of the academy graduates, Pulisic remains the player in the squad most likely to create something out of nothing and to lose a player like that to a rival would be foolish in the extreme. [Obligatory reference to Mo Salah, Kevin de Bruyne and Romelu Lukaku].

But it’s Tuchel’s last point – urging “patience” – so often an empty buzzword from managers deflecting a real reason for a player not getting game time, that should ease Chelsea fans’ worries that they’re on the brink of seeing another brilliant talent up sticks and go onto great things elsewhere. In this instance – albeit on the back of short-lived evidence thus far – Pulisic should be confident that his stoicism will pay off in the knowledge that Tuchel doesn’t make hollow promises. Other players have been told they must wait for their chance and it duly came as part of Tuchel’s integration masterplan.

First it was Timo Werner, then Hakim Ziyech, now Kai Havertz. Next up: Pulisic.