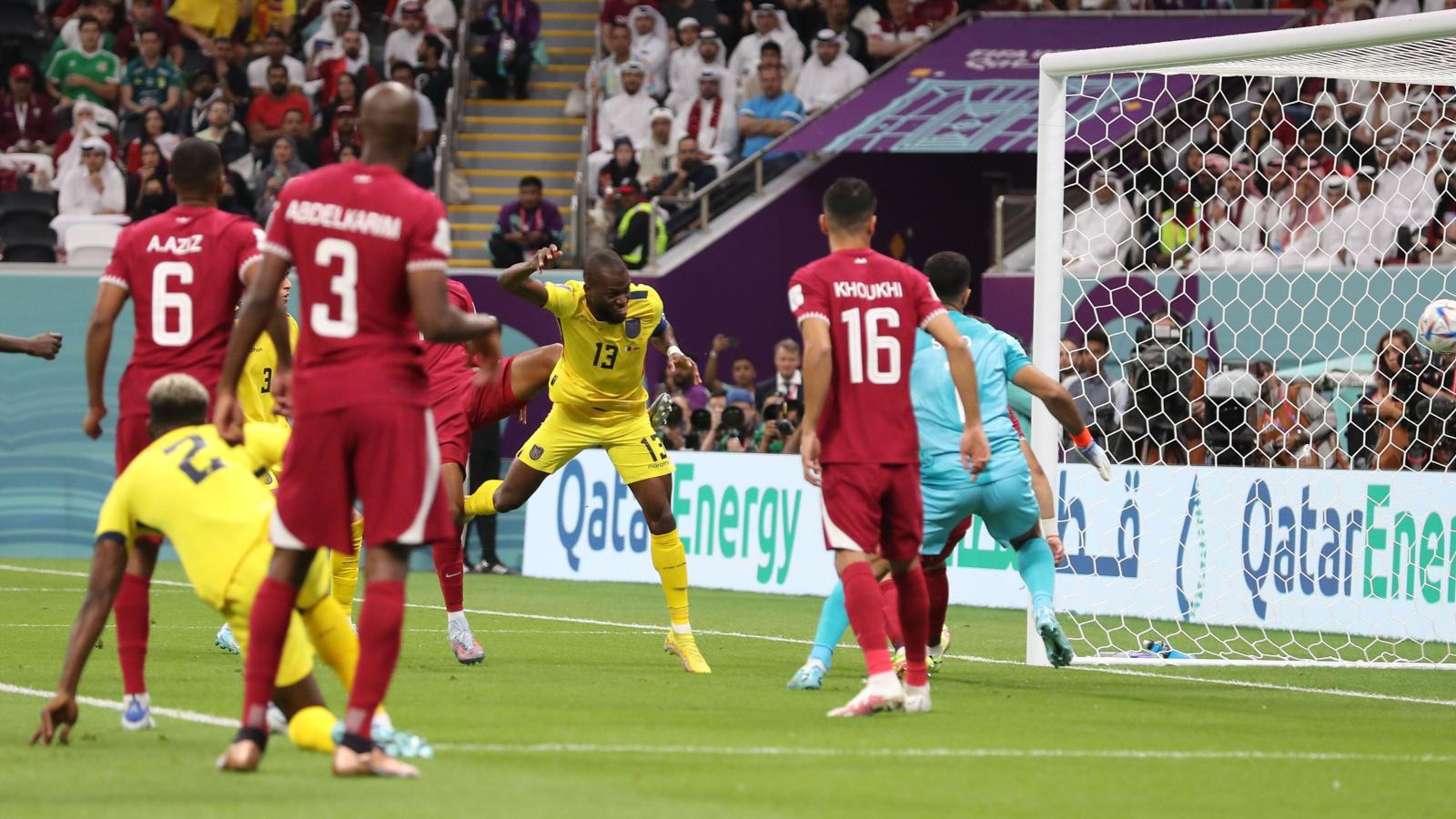 We’ve thought about it and decided that opening World Cup match went pretty much as well as anyone could have hoped.

It was rubbish, Qatar were dreadful, and everyone got to unload all their VAR jokes and grievances inside the first five minutes. For this particular opening game at this particular World Cup, we couldn’t have asked for more.

At some point a genuinely brilliant game of football is going to come along and, despite ourselves, we’ll get excited about it. But this game was assuredly not that game, and the longer we can maintain snooty disdain for everything about this tournament the better.

Mainly, we’re also childishly invested in Qatar doing terribly. And on that score this really was unimprovable. They were honking. Ecuador are a middling international side who put in half-an-hour of concerted effort and an hour of canny low-energy game management that absolutely never looked likely to come back and bite them. They remained levels above Qatar at all times, and the hosts’ failure to spend any of the last 12 years trying to source and train a proper goalkeeper already looks like a catastrophic but hilarious mistake.

There will be plenty out there who argue that having a VAR decision go Qatar’s way just three minutes into the tournament is a bit on the nose, a bit hack, a bit rejected-in-the-writers’-room-for-being-too-obvious. To those people we say, one, that whole “bit on the nose, lazy writing” is itself extremely cliche and hack which is why we’re having our cake and eating it by framing it this way. But two, and more importantly, no. This was excellent. This was the very ideal way for the tournament to start. A VAR decision for all Twitter!

We desperately wanted this game to be boring and for Qatar to be well beaten, and it was precisely that. But that was always going to mean some banter being needed along the way to keep everyone going, and that was hugely enjoyable VAR nonsense on every level. If the game is going to be ruined, at least try and make it funny.

Offside decisions like this one are the very best sort of VAR decision. They allow everyone to say “technically correct” in a sniffy way, but what’s good about that is “technically correct” really just means “correct”. What the sniffiness really comes from is that these sort of offside decisions – and this one was a pretty much perfect example – were not only never given offside before VAR but most importantly were never even discussed, and really that’s what the clamour for VAR was all about.

It’s almost like giving flawed technology wide-reaching power to intervene in football matches has had unintended consequences. Who could have possibly have imagined that? And if we want to get rid of joy-sapping, moment-stealing “technically correct” decisions like today’s then really the only solution is to not only scrap VAR but also ban endless discussion of “bad decisions” that go against our teams because we just have to accept that’s part of the game and we’ve now seen the alternative and decided it’s worse. Pretty confident football isn’t ready to have that particular conversation.

But if VAR is staying as we must assume it is then it is going to have to get better at explaining itself. Nothing was going to stop the confirmation-bias and conspiracy theories already racing round the internet, but showing one inconclusive replay and then nothing for 10 minutes certainly helped the spread. And then when we did get the actual evidence the decision was based on, the graphics for the “semi-automated” system were absolutely sensationally low-rent. It’s just as well we all got our first glimpse of them in a game that doesn’t matter and an incident that had no bearing on the result. At least everyone should now be braced for the inevitable shitstorms to come.

A lovely bit of VAR huffing also allowed the BBC coverage to move on from what was in truth a pretty adept handling of the elephant in the studio during the pre-match section. Alex Scott spoke brilliantly and Alan Shearer scathingly of the issues around the tournament and there was no pretence at “sticking to football”. Even Shearer’s Newcastle affiliations were addressed to cut off another potential avenue of whataboutery and deflection from the disingenuous.

Inevitably, though, the sight of Shearer getting just as het up about VAR as he did about migrant workers makes the whole thing look a bit weird. It’s an impossible situation in which neither focusing on nor ignoring the football is really viable. Gary Lineker and the gang dealt with it as well as could be expected.

The same could not be said for Dion Dublin’s often bizarre turn in the co-commentator’s chair. When not attempting to offer precise medical diagnoses of various on-field injuries – at one point surely breaking the world record for most repetitions of the word “knee” in a 15-second period – he was often to be found praising the non-stop singing of the Qatar fans in a manner usually reserved for non-league supporters having a cracking day out at Goodison Park or Elland Road in the FA Cup third round.

We spent a good deal of the second half, when in our defence nothing much else was happening, trying and failing to come up with an answer to the puzzle of how a man can be a perfectly competent host of a popular daytime TV show about tarting up houses for profit yet so inept at offering co-commentary insight on the sport he played professionally for two decades.

The early VAR kerfuffle being so swiftly followed by Ecuador being awarded and scoring a penalty was also good for slowing the progress of the conspiracy theories, and it was obviously important that Qatar got beat. We’ll admit to having been spooked by all the beard-stroking hipsters who’ve spent the last couple of weeks going “Don’t write Qatar off, they’re no mugs actually” and are delighted to report that Qatar are absolutely shit.

Maybe they were nervous – they certainly looked it – and maybe in other games their goalkeeper won’t stage his own dirty protest against the tournament. But other host nations were surely nervous before their opening game and none had ever lost it. Qatar had lost this game with barely half an hour on the clock.

And they will not face a weaker team than Ecuador after this. Based on the defending and goalkeeping we saw here, Netherlands could absolutely smash them to pieces if they are, in multiple ways, brave enough.

It is now in any case a desperately long road to qualification for Qatar and we’re unapologetically happy about that. It’s how we’re coping with it all.

Normally at a World Cup staged outside the traditional footballing heartlands you find yourself rooting for the hosts a bit. South Africa. Japan and South Korea. Even the bloody Americans in 1994, a little bit.

The longer the hosts are interested and involved the better it is for the tournament. More fun for everyone that way. Not here, though. The best copium for this tournament is going to be the hosts disappearing from the on-field action at the earliest opportunity. At least that, unlike literally everything else at this accursed tournament, now shouldn’t be an issue.