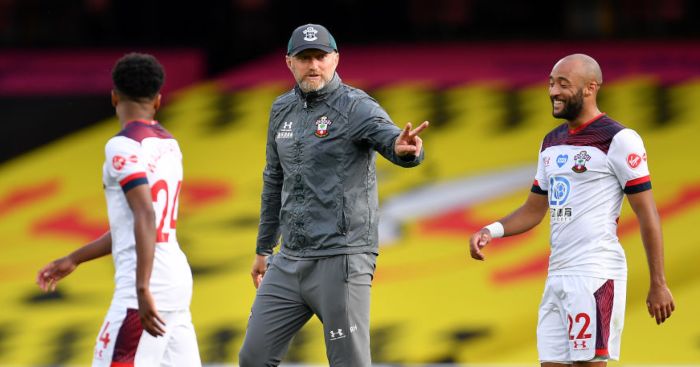 “We worked very hard to get these points. The great thing in football is you can always turn things around,” said Southampton manager Ralph Hasenhüttl in February. The general consensus is that the Austrian has masterminded an upturn in form for what looked a beleaguered Saints side after the 9-0 drubbing by Leicester.

But when examining the ups and downs of a tumultuous season, it’s hard to argue that he doesn’t deserve some faith to improve a squad he has transformed.

The former Leipzig coach has improved the Saints’ overall play and brought a semblance of resilience to the brittle resolve that was so evident last season. Prior to this year, Hasenhüttl’s first full season as manager, the team had a habit of collapsing in a variety of hapless contexts.

In the 2018/19 season, Saints took the lead in 21 games but only managed to turn those into nine wins. It was endemic of their inability to manage games, control situations and hold onto points.

This season, they have already picked up 12 wins from 17 matches when they scored the first goal – largely thanks to the organisation and spirit introduced by the Austrian.

Ralph Hasenhuttl doesn't get enough credit for the job he's done at Southampton. Sensible on their part to tie him down to a long-term deal, too.

But not even this good work can legislate for the individual errors of which Saints are so often guilty. Yan Valery allowing Allan Saint-Maximin to zip past him like a Ferrari car passing an elderly cyclist on a country lane, gifting Newcastle a 1-0 win, will not be a pleasant memory for fans.

Nor will they forget Kevin Danso souring an imperious debut against Manchester United – playing out of position – with a needless sending-off that prevented the team from pressing for a winner.

Even on the opening day at Burnley, Jannik Vestergaard’s giant frame didn’t seem capable of leaving the ground as Sean Dyche’s side launched a barrage of balls into the Saints penalty area, overwhelming the south coast side in a 3-0 defeat.

Individual errors have been a hallmark of their season so far, the most recent of which came in the 2-0 defeat to Arsenal and those few moments of dawdling when Alex McCarthy wondered if he’d left the oven on at home to allow Eddie Nketiah to pounce.

Southampton currently sit 13th in the Premier League table. With a steady and consistent attacking output, scoring more teams than each of the teams below them and four of the five directly in front, fingers must be pointed at their defensive record when examining why they don’t find themselves higher.

Saints’ overall xG (Expected Goals) for the season is 45.5, compared to an actual tally of 41, with just shy of 44% of their Premier League goals coming from Danny Ings. Hasenhüttl has worked on a system – 4-2-2-2 – in which the high energy of players like Ings, Nathan Redmond and James Ward-Prowse can exploit the opposition into turning over possession in their own half, leading to chances.

Wanted to see how Danny Ings' season was stacking up and was pretty blown away.

This was on display to an extraordinary degree against Norwich in the first match of the Premier League restart. The team harried and harassed a ball-playing defence into giving away possession on countless occasions. The manger was impressed: “We never lost our passion working [off the ball].”

However, the defensive statistics exemplify the need for reinforcements in the next transfer window. Only the relegation-bound Norwich and Aston Villa have conceded more goals than Southampton, with Saints shipping 55 in 32 games. Of course, the demolition suffered at the hands of Leicester could be considered something of an outlier. The team has an xGA (Expected Goals Against) of 48.3 and has conceded a total of 55, owing to them conceding some unnecessary and avoidable – or freak – goals.

So, the statistics look positive for Hasenhüttl, whose impact cannot be understated. The Austrian had offers from Champions League clubs – or those aspiring to be as such – before rocking up at St. Mary’s. He has transformed the atmosphere as much as the playing style. With the 3-1 victory at Watford, the team has now reached the 40-point mark for the first time since the 2016/17 season, under Claude Puel. The manager repeatedly stressed that 36 points was his aim – a point at which futures could be considered, contracts could be signed and the squad could be reshaped.

Saints have the worst home record in the division this season and two members of their defensive unit – Jan Bednarek and McCarthy – are among the worst offenders for errors leading directly to goals in the league. Hasenhüttl has been keen to align himself with the club’s philosophies; he doesn’t expect an outlandish budget, or to be signing ageing players. But he deserves some reward for the excellent coaching that he has so capably introduced to the team. Southampton have an identity again and they certainly have a top manager – now they need to back him.