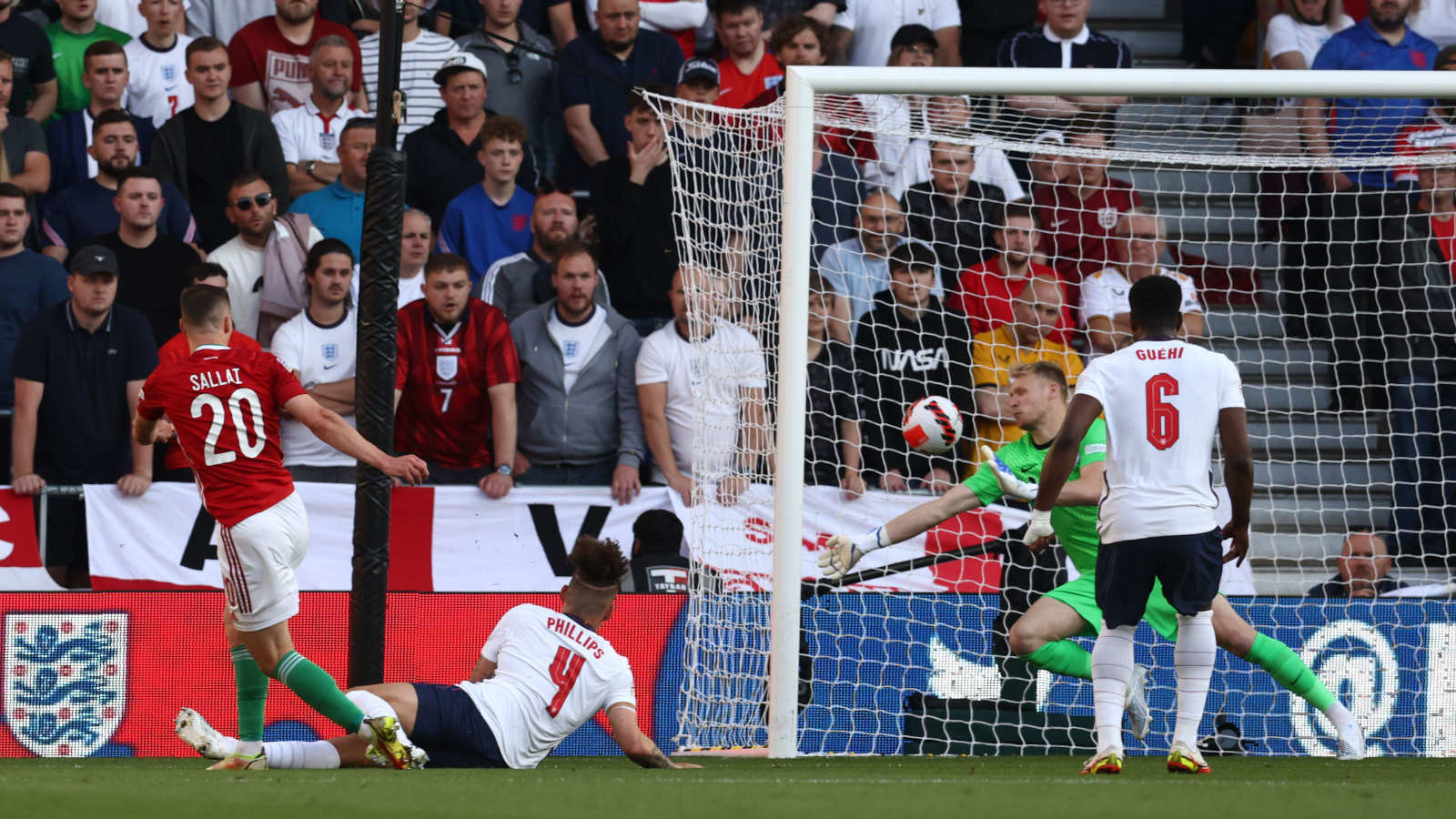 Aaron Ramsdale for England is difficult to defend but for as long as anyone can remember, goalkeeping analysis in the media has been woeful.

Every England defeat must be followed by a round of scapegoating, and the Hungary match didn’t leave critics short of choice for a target. But 36 hours after the team’s worst home defeat in 94 years, one name continued to sit in the Twitter trending topics list while the shortcomings of those around him slipped from view: goalkeeper Aaron Ramsdale. A substantial proportion of this was your regular, bog-standard local rivalry and other assorted bantz, but over the years, a lot of the criticism of goalkeepers has had its roots in television punditry and what seems to be a fundamental lack of understanding of this position.

It should go without saying that none of this is a ‘defence’ of Ramsdale’s performance in this particular match. He faced five shots on target, and four of them ended up in the back of his net. But to focus on that is to only tell part of the story of what a goalkeeper even does on the pitch. Shot-stopping is only part of what it means to be a goalkeeper. Whole matches can go by without goalkeepers needing to make a save. Far more time is taken up with organisation. The goalkeeper has the best view of his team’s defence on the pitch, and has a better view of how the opposition’s attack is trying to break through it, too. They spend much of every match shouting for a reason. For many goalkeepers, a successful day at the office may well look from the outside like a very quiet one.

But as the marshall of the team’s defence, if their communication has been effective, the ball may not even get anywhere near their goal. This can require incredible levels of concentration. A goalkeeper might easily find more than half of a match taking place in the opposition half, and yet they may only be judged on what happens when the ball is in their half of the pitch and that they will need to react both quickly and correctly, every single time. Unlike players in any other position, they are the literal last line of defence. If they make a mistake and the ball gets past them, the likelihood is that there will be no-one behind them to cover.

And since the removal of the back-pass rule 30 years ago, goalkeepers have had to become ball players as well. The best goalkeepers don’t just stop attacks by the opposition from ending in goals, they can also help to start them for their own team with quick and imaginative distribution of the ball. This has been the case now for many years and it is now bred into goalkeepers from the start of their training, but there was certainly a time when the sight of a goalkeeper with his foot on the ball was enough to make the crowds’ hearts leap to their throats, as though the outcome of their match had suddenly become dependent on a dog’s ability to finish a crossword. Those days are gone, but so too – largely – are the days of long, aimless punts down the pitch.

It is, therefore, surprising that none of the main broadcasters employ a single goalkeeper as a pundit for their Premier League coverage, and that so few former goalkeepers are seen in the broadcast media in general. It’s a specialised position, and probably the most important single position in any team. And not only are there no specialists in that position represented by the broadcasters who shape the perception of the game in this country, but the standard of analysis that is offered on goalkeeping is often woeful. Consider this, from Squawka’s report of the match on Tuesday night: ‘Three of the Hungary goals were eminently savable shots that he simply lacked the presence and/or technique to keep out.’

Well, let’s take the first goal from this game, then. What’s noticeable about the initial positioning (21 seconds) is how high that line is, and that within four seconds it had just collapsed in on itself. By the time the ball is headed back across the goal, the defensive line is in disarray and not offering Ramsdale any cover. But goalkeeping is about playing the odds, calculated gambles to minimise the chance of a striker getting the ball past you and on target. At this moment, Roland Sallai’s body shape is indicating a shot diagonally back across goal, and Ramsdale’s body positioning suggests that this is what the goalkeeper is anticipating.

But instead, Sallai wrapped his leg almost around and over the ball and went for the near post instead. It was a powerful shot, but one that Ramsdale would have expected to save had he guessed where Sallai was going to put the ball. But that tenth-of-a-second readjustment left him diving for the ball, and with Sallai being barely eight yards out and catching the ball cleanly, Ramsdale was forced into the last resort territory of the goalkeeper, throwing yourself in the direction of the ball while ‘making yourself as big as possible’, and ultimately hoping for the best. He almost got lucky. The ball struck his arm. Another inch or two higher and we might have been applauding a brilliant save.

The point here is that goalkeeping is 99% anticipation and 1% reaction. Criticising Ramsdale for not saving this shot is missing the point of what goalkeeping is about. When the anticipation fails, it can leave a goalkeeper looking like what follows is a mistake. Of course Aaron Ramsdale has got ‘presence’. He’s a 6’2 tall Yorkshireman with a voice like a foghorn. And of course he’s got ‘technique’. Ramsdale is a goalkeeper for a top six club in the Premier League. Players simply don’t get far without ‘technique’, in all positions, anymore.

What Aaron Ramsdale may lack at the moment is experience. That’s where he lost out in this two-second stand-off with Roland Sallai. But it is one area of the game in which he can grow and continue to grow. Ramsdale has only just turned 24 years old. The best older goalkeepers exhibit an almost preternatural ability to be in the right place at the right time. They’ll know where the striker is most likely to put the ball. They’ll be acutely aware of changes to their movement or body language, and movements of their eyes too. They won’t always get it right, and conceding goals is part of the game. But the experienced goalkeeper knows how to reduce those odds, and the more experienced a goalkeeper, the more loaded the dice are in their favour.

And to repeat, none of this is to say that Ramsdale had a good game against Hungary, or anything like that. As the goalkeeper he has to accept a share of blame for any goal conceded, and in the ruthless world of football these momentary lapses in anticipation can have hugely out-sized consequences, while few onlookers even care that much about the difference between the goals you can do anything about and those you can’t. It is fair to say that he could have done better without having to resort to derision. Ultimately, the goalkeepers who end up getting caught out in the long term are those who don’t learn from experience and who have issues with completely retaining their concentration. These are the most important metrics by which they will be judged.

But much of the media analysis of goalkeeping seems to skirt over the position’s role as the root of the team and focuses entirely on reaction, instead. Goalkeeping is a series of intricacies, from the trickeries of the movement of the ball in the air to telling the great lummoxes in front of you what they might not be able to see with their own eyes over the din of 30,000 people shouting themselves silly. But still goalkeepers are under-represented in media coverage of the game. Why should this be? It certainly isn’t that there aren’t there aren’t people who can talk intelligently, passionately and with insight about goalkeeping. Plenty were on display in the excellent BT Sport documentary ‘The Special 1’.

Aaron Ramsdale will learn. Experience is probably more important to goalkeeping than to any other position on the pitch, and it doesn’t come without the occasional game in which nothing goes right. But the media also need to learn. Goalkeepers themselves are plenty used to people not understanding what they do – it’s the fundamental reason for the existence of the Goalkeeper’s Union; if no-one else is going to defend you, you have to look out for each other – but it still feels like a substantial blind spot, at a time when goals can be worth tens or even hundreds of millions of pounds.