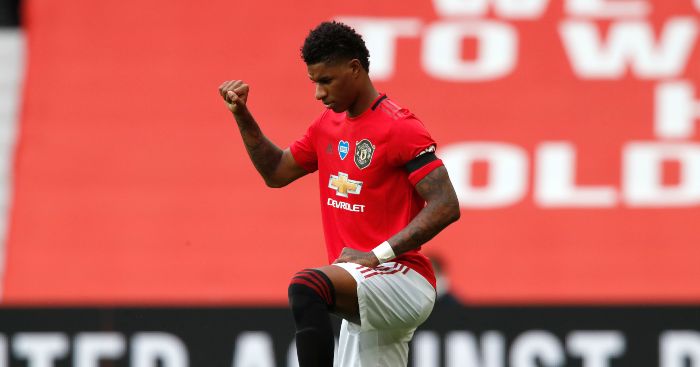 You know those people who tell us to “stick to the football” whenever any of us have introduced a political element into our football observations and thinking? Just as well Marcus Rashford didn’t listen to such voices.

As we have long said, football exists within society, politics is about what we do, how we organise, look after, fund and express ourselves as a society, thus football and politics cannot be separated.

In recent times we have been accused of ‘virtue signalling’. As you know, this is a popular way of putting down anyone who is just trying to be a decent person. It’s a cynical frame of mind. But this week we have seen Sir Marcus of Rashford and those who agree with him accused of just that. His actions to date are not enough to prove his sincerity according to some people.

Take Brendan Clarke-Smith, MP for Bassettlaw, who said: ‘We need to get back to the idea of taking responsibility, and this means less celebrity virtue-signalling on Twitter by proxy and more action to tackle the real causes of child poverty.’

Ugh. That is classic unvirtuous-signalling. Of course, the real causes of child poverty are well understood and many organisations could tell any MP exactly what they are and how to ameliorate them. We know how to end child poverty right here and right now. But governments have wilfully chosen not to in the same way they have chosen not to make food banks unnecessary.

Poverty is not natural, inevitable or innate, it is the product of deliberate decisions by governments for whom poverty is their economic system’s tool for bullying people into working for low wages to make a tiny elite very rich indeed.

It seems that the heat from the obvious truth that Covid-19 has revealed – that society is held together, people are kept alive and the comfy lives of the well-off facilitated by low paid workers – has not penetrated the permafrost of some consciences.

All Rashford is saying, in redux, is ‘some kids are hungry, let’s feed them’. Already 2-0 up, with one governmental volte face and an MBE on the scoreboard, there is clearly a mood by some to stop this black working-class footballer from getting uppity, from getting above his bloody station. I wouldn’t be surprised if they start to try and undermine him, impune his character, depict him and by extension his argument as less than perfect. It would not be a surprise at all if some newspapers are engaged in that digging right this minute. We’ve seen it before. We’ll see it again.

But as much as Rashford says this isn’t political, it actually is, just not party political. He has shown how societal issues such as free school meals can affect young footballers like him as well as anyone else. Obviously, he’s right to not align to any party because football itself informs us how destructive, blinkered and stupid tribalism can be, and that applies to political parties as much as clubs, even if Rashford is bloody good at coming in off the left and scoring.

Despite objecting to his pressure, the F**k Jumbo government is nothing if not weak, intellectually moribund and morally dubious, so as I write this, a dressed-up U-Turn is on the cards.

Hungry kids are innocent and cannot be demonised the way the poor so often are, but while this is a single-issue campaign, uncomplicated and easy to understand, are we beginning to see a new powerful way to shift ignorant, bad or outright evil governmental decisions? British footballers are often drawn from circumstances which give them an innate understanding of underprivileged and deprived lives, as well as other societal issues.

The Manchester United striker is setting a precedent, creating a template for change. There are many issues in society right now which are so clearly unfair and unjust, but which for reasons of administrative incompetence, political ill-will, misunderstanding, intellectual inadequacy or outright moral bankruptcy are not getting sorted out.

Could a footballer or a group of footballers regularly pressure the government on these issues? Who would go up against Conor Coady’s war against the need for food banks, or Harry Kane’s campaign to stop the sale of school playing fields to developers? Any well-liked footballer could follow Marcus’ example. Once hooked up with the relevant organisations and with the people’s goodwill behind them, the potential is enormous.

Obviously, this should not be necessary, but we’ve seen the powerful community effect that Marcus’ work has had. Over 600 businesses, charities, local authorities and individuals are providing free or subsidised meals for children this half-term.

This is a double-edged sword because while it helps hungry children, it also excuses the state from its duty of care. Indeed, if we are cursed by a government which believes in charity picking up the financial slack for that duty of care rather than the state doing so on all our behalves with equanimity, not one kid excluded by this postcode lottery of help (and those who have voted for it on the “I’m all right Jack keep your hands off of my stack” basis) then they will use our good intent against us and further abandon people in need. All the more reason to keep high-profile pressure on.

We shouldn’t ever forget that had he not chosen to pursue this cause, kids would indeed have gone hungry and the government would have let that happen; they are still inclined for that to be the case. Even if they change the policy under pressure, it isn’t something they want to do and we should incorporate this into our database of political understanding.

It isn’t right that Marcus’ voice should have more weight than you or I, but because the government seems to care more about its image than its policy, it does. We don’t trust them. We do trust the player. The halogen light of football celebrity being shone into the dark heart of government for the greater good is, it would seem, the only hope we have for them to be held to account, now that so much media scrutiny from press and TV is discounted by all sides as being biased. In this case it has also galvanised 2,000 paediatricians to write in support of him and his cause. Though given this government’s well-known lack of belief in experts and its addiction to dishonesty, maybe without a famous footballer on board, that would make no difference to them.

There are those who say we shouldn’t have to have governmental policy decided by high-profile, rich footballers. Maybe, but we absolutely should have it informed by those who have lived on the frontline where policy takes effect, by people who know the situation, who understand all the pros and cons because they have lived them. Some of those people are footballers. And one of them is Marcus Rashford. Let’s hope he is not the last because politics not only belongs in football, it is football.