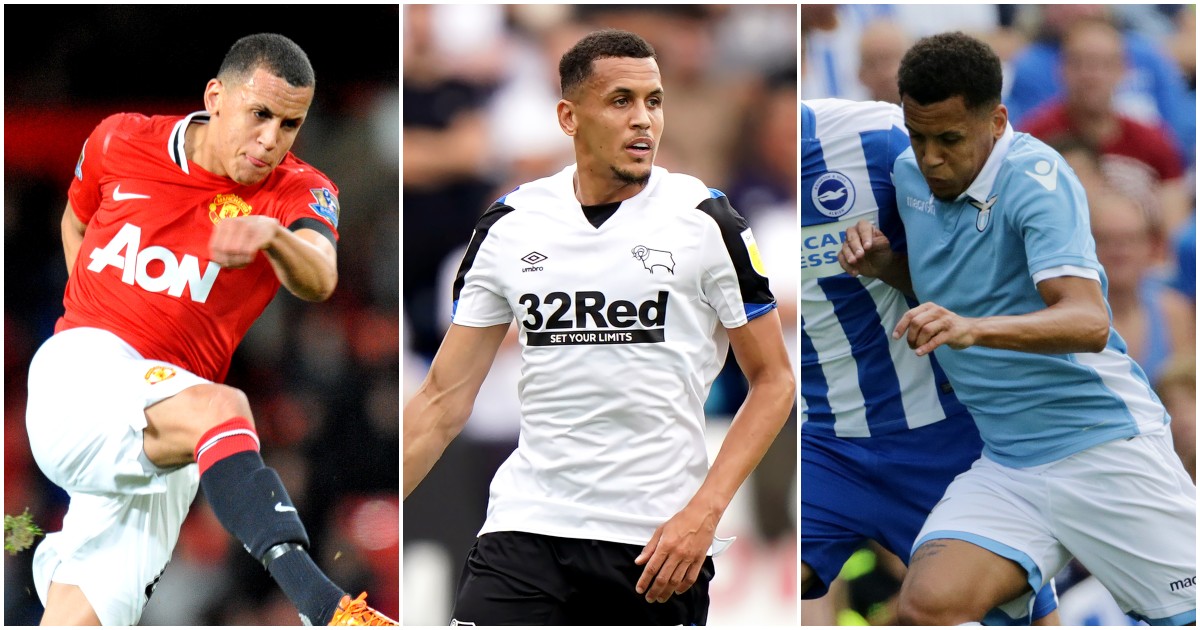 Many a manager believed they could be the one to unlock such immense potential. It could be that the chaos at Derby suits Ravel Morrison.

Who’s this then?
Ravel Ryan Morrison turned 28 in February and is a 5ft 9ins Wythenshawe-born midfielder. He is currently playing for Derby County and scored a brilliant goal last weekend. Incredibly, it was his first in England since 2014.

He has turned out for 12 different clubs in 11 years but has only played 143 games and scored 20 goals. When you think that last week’s subject Romelu Lukaku has racked up over 600 matches by age 28, that shows you how little Morrison has played.

He’s his generation’s great lost football talent blessed with brilliance in his feet but without the ability to utilise it more than occasionally.

He started out, famously, at Manchester United in 2010, but was moved on to West Ham United having just played three games. Sir Alex Ferguson was a big fan of him as a footballer but felt he had to get the hell out of Manchester to escape various lifestyle issues and associations. So down he went to the famously sinless streets of London.

The Hammers, managed by Sam Allardyce, sent him on loan to Birmingham for the 2012/13 season and it was at the Blues that he played his most games for one club, turning out 30 times and scoring thrice. While boss Lee Clark wasn’t sure his attitude was right, he stuck the whole season out and, it is commonly agreed, was really influential. Clark wanted him to stay, Big Sam wanted him back.

In 2013/14 he played 21 games for the newly-promoted Hammers and scored four times, winning the club’s Goal of the Season for the third in an away win at Spurs. Morrison claimed he was dropped from the team because he refused to sign with agent Mark Curtis, who had links with many of Allardyce’s players. Allardyce denied the claims but sent him off on loan to QPR. When Allardyce was drummed out of England, Morrison made this rather telling tweet:

no 1 listened to a word I said

He did well in west London, playing 17 times and scoring six goals – the most he has scored for any one club so far in his career.

During the 2013/14 season Morrison also played four times for England U21s, scoring twice. It was to be his best season but even so, he couldn’t knuckle down and Allardyce sent him on loan again, this time to Cardiff City for a campaign in the Championship in 2014/15; he only played seven times and thus began a nine-team trawl around the world.

Lazio wanted him and amazingly gave him a four-year deal but played him just four times in 2015/16. He declared himself “unsettled” and they loaned him back to QPR. He managed five games and went back to Lazio who then loaned him to Atlas in the Mexican top flight.

That seemed to suit our boy and he played 25 games for the club, scoring four times – are you keeping up? – but at the end of it Morrison was back at Lazio. Östersund took him in February 2019 for the rest of their season. He played nine games and was let go, though had apparently impressed.

From there Chris Wilder took him to Sheffield United – clearly not his sort of player, as surely anyone could’ve told him. He played four times and was loaned to Middlesbrough in January. Same situation. He played just three times for the glorious Teessiders. From there he signed on for ADO Den Haag for five games in the Eredivisie.

Given he’s only got into double figures for appearances in just one of his last nine clubs, Derby will probably be expecting him to disappear in January. He’s on a one-year contract.

Why does he keep getting chances?
It’s a good question and from the outside quite puzzling given there is so much evidence of his inability to really apply himself for very long. Obviously, he is super talented. And like every bad boy’s partner who thinks they can tame him, every manager that’s taken him probably reckons they know how to handle this kid, get him on the straight and narrow and then they’d have a great player. Of course, this never happens and it all ends in tears.

Without ploughing in detail through his charge sheet as a teenager, there is some very unpleasant stuff against his name – things that in most industries would have led to you being unemployable. However, football’s exceptionalism knows few boundaries and there always seems to be someone who’ll hang their hat on natural talent regardless.

This is, in part, an understandable instinct to want to give someone who did not have the easiest or ideal upbringing a second, third or fourth chance.

Wayne Rooney said that Morrison was “misunderstood”, though quite what that means I don’t know. But maybe he needs a sympathetic soul like Rooney who has hardly led a blemish-free lifestyle for a bit of empathy and understanding. There’s no doubt he’s got a good player on his hands and at a time when they’ve hardly any players and the club is a basket case, struggling to even field a full team, that is all Rooney can think about.

Rio Ferdinand has said that Sir Alex Ferguson thought he was the best young player he’d ever seen. He was in a youth team with Jesse Lingard and Paul Pogba and everyone thought he was a stick-on to be the next superstar. That it didn’t happen, according to Rio, was down to bad habits off the pitch and inability to concentrate and focus 100% of the time as a player.

When younger he developed a reputation as being a thug and not exactly bright. Certainly, his run-ins with the law in his teens did him no good whatsoever, but he doesn’t seem stupid. Reading his interviews about how he just didn’t know how to behave and found concentrating difficult from an early age, not even being able to explain why he behaved as he did, one sees why it didn’t work out. His behaviour, the inability to focus, the lack of self-awareness or foresight, the instinctive brilliance and lack of application points towards something else.

Maybe football just isn’t that important to Morrison as anything other than an employer. That’s understandable, logical in some ways. The degree to which you have to take the game seriously and dedicate your whole existence to it often looks, from the outside, bizarre.

If he and Derby County can keep it together and not fall apart, it will be a good platform for him. Football is always desperate for the kind of talent that comes natural to him and a good season in the Championship will only give him a leg up back to the Premier League via a 13th club. But only if he can just turn up on time, do his job and pull his weight. That may be a big ask.

What the people say
I didn’t expect much input this week because Morrison has been out of the British public eye for so long. The only thing anyone knows about him is that he’s a wasted talent who everyone thought was great and that he has a bit of a dodgy past. It sticks. Redemption will be hard won but the feeling remains that if one good season could right his ship on the choppy waters of life, two would see him back in the mainstream. Whether that is where he wants to be is another matter.

While at The Blades i’d often see him about near the hotel he stayed in, full tracksuit each time. Lovely chap, time for everyone. On one occasion in M&S cafe, he paid for his sandwich with two £20 notes, after a back and forth, insisted the lady split the change with the staff

‘I can’t remember another player in my lifetime that has had so much reported potential. Every time he makes a move it will be the key to unlocking him and letting his wonders out. And then… nothing.’

‘Paul Pogba without the relentless drive and application…’

‘He called out Allardyce’s nefarious ways.’

‘There’s more to lament with him I think, than there is to celebrate. A lost talent, a chequered past (to put it politely). He’s a tough one.’

Gets his money’s worth from a travel card.

‘One of the ‘What ifs’ of football. I was trying to think of something good he did when at Boro and all I could think of is that he didn’t come back the following season.’

‘A hugely talented player who has shown that footballers can suffer from the same problems in life as anyone else and not be able to reach their true potential.’

‘At least every time I hear his name I’m reminded of an Ian Dury record.’

‘In his most recent interviews you get the sense that he has matured from his younger years – it’s widely accepted that he’ll never reach the glorious heights predicted a decade ago, but hopefully the right manager/club/environment will allow him to show why everyone was so excited.’

Was a pleasure to watch at #BCFC during his loan spell, an exciting player who could/should have enjoyed a top half of the Prem career (anyone that Lazio take a punt on must have a touch of class). Shame the attitude issues appear to have impacted so heavily. pic.twitter.com/WME7I7NdpN

Future days
At 28 there is no reason to assume Morrison will change his habits now. Turning out for Wayne Rooney‘s Derby County could be the saving or the making of him but it doesn’t seem massively unreasonable to assume it likely won’t be, given his track record. He seems to be the sort of person who doesn’t want to prove people wrong, but perhaps would rather live down to expectations. Do people change? Occasionally, but not often. By 28 who you are and how you go about your business is more than likely set. That being said, if he could get the right kind of head health and support, who’s to say he can’t change profoundly? He did manage a full season in Mexico, after all. Maybe he is slowly changing.

As odd as it might sound, playing for a club that is as dissolute and ramshackle as his own career might be a battle that he fancies putting his shoulder to this particular wheel, at least for a while. When you’re the odd one out it’s easy to feel isolated, but if you’re in a chaotic environment you just seem like part of the chaos. That may help him. If so, we should enjoy his not inconsiderable talents while we can.

His career is littered with new starts and then loans after six months and a handful of games. The number of chances he’s been given almost beggars belief but who are we to judge any man in his position? If he can sort out his issues, there’s no reason why he can’t flourish in the last third of his career. When you’ve only played 140 games in 11 years, you’re hardly going to be burnt out by your mid-30s so, at least in theory, he could play on until he was 40. And if he can manage to do that at a decent level in British football, then we’ll all be better for it.