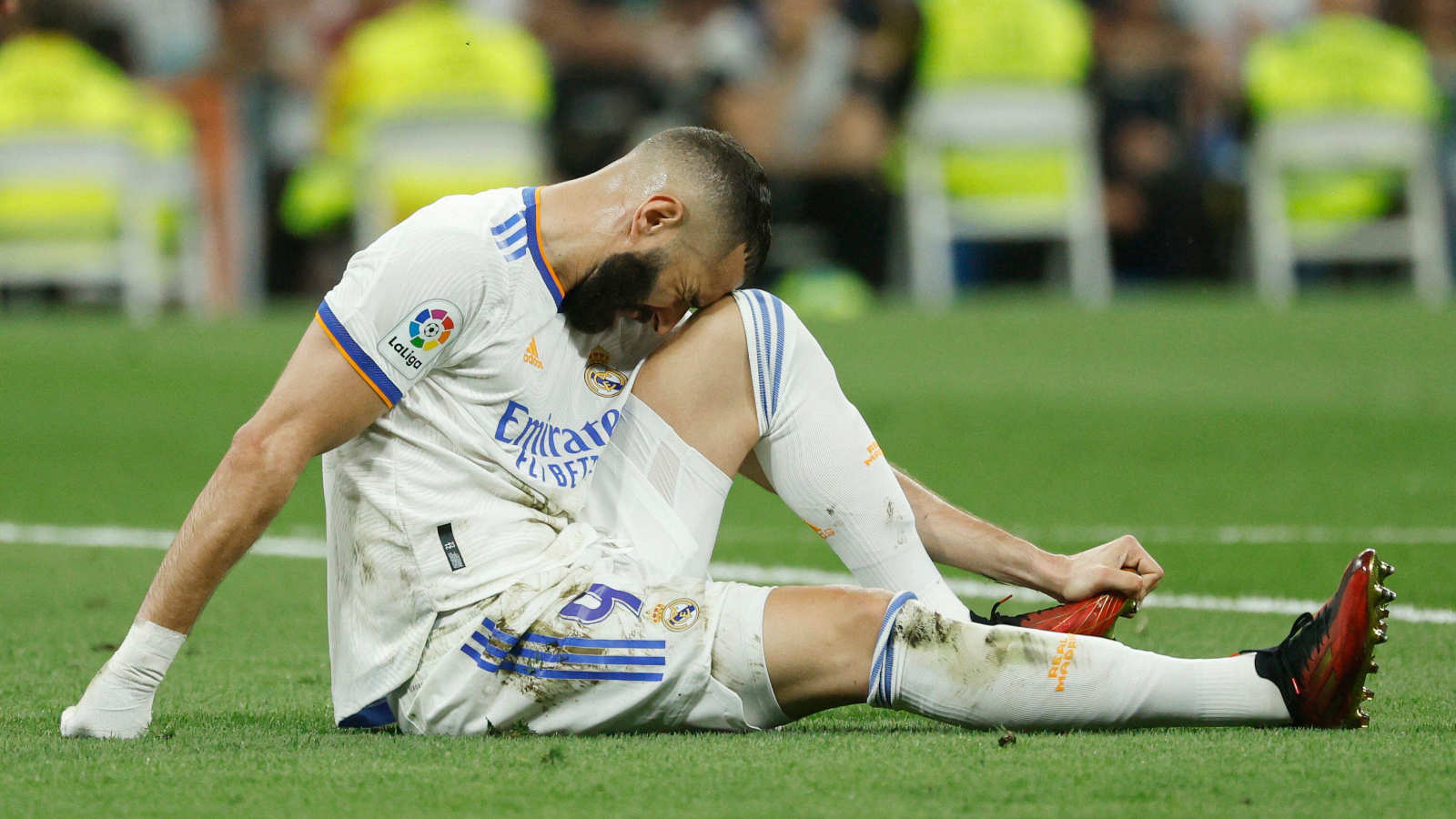 Real Madrid head for the Champions League final accusing Liverpool of arrogance. Might European football’s royalty have something to deflect?

As Mediawatch reliably reminds us, there are plenty on the sidelines prepared to twist fairly innocuous comments to fan certain flames for their own gain. But in the build-up to this year’s Champions League final, quotes from Karim Benezma about Liverpool’s perceived arrogance going into this year’s final have raised an eyebrow or two. Indeed, it’s not difficult to see how the centre-forward Benzema might have been playing a little more defensively this week – in the media, at least.

On the eve of the match, we arrive at a peculiar War Of Words from which nobody emerges with a great deal of credit. Interviewed by Futbol en Movistar+, Benzema said: “Liverpool have a lot of confidence, maybe they think they already won the game, maybe they think this isn’t the same Real Madrid as before, that they’re favourites.” This has predictably set social media ablaze, with Liverpool supporters claiming what we might describe as ‘counter-arrogance’, pointing out the shirts with the number ’14’ printed on them – Real Madrid have won the Champions League on 13 previous occasions – after their semi-final against Manchester City.

It’s important to rewind a little here, to draw the lens back and take a slightly broader view of all this. This is Liverpool and Real Madrid that we’re talking about. These two clubs have won the European Cup or Champions League 19 times out of 66 between them. That’s more than a quarter of the total. Add in the six combined finals that they’ve also lost – although three have been against the other – and that means a third of the European Cup finals ever played have involved one or both of these two clubs. It’s difficult to argue that this isn’t the definitive Champions League final. They are, if such a thing exists, European football royalty. In the case of ‘Royal’ Madrid, it’s almost literally true.

Yet the attempts at mind games keep sneaking in, as seen from Benzema’s comments. Now it’s fair to say that players are always likely to be put on the spot by some questions, but although we might reasonably argue he is not a very nice man at all, Benzema is not stupid and he is a very experienced pro who knows full well that he didn’t have to say any of that in the build-up. Players are careful and media-savvy these days, and the players at clubs of the size of Real Madrid are their own cottage industries, with PR people constantly monitoring the right and wrong things to say. The same goes for Mo Salah and his comments about wanting revenge for the 2018 final, when Sergio Ramos doing Sergio Ramos things led to his early withdrawal from the game, and eventual defeat for Liverpool.

Players do seem to need a bit of a bunker mentality at times like these, and perhaps the increase in these pre-match barbs is reflective of the pressure. It’s not difficult to see how just chatting some sh*t like this is a valve that pushes attention elsewhere. Benzema drops his bomb in his interview – argue among yourselves over whether you consider it to be truthful or not – but then walks away, back to the extremely gated community of the Real Madrid player in the build-up to a Champions League final. If he takes energy from the angry responses, he can look at them. If he doesn’t want to, he’s under no obligation. And if it unsettles the opposition a little, gets inside the head of just one person of significance, then job done.

In the the build-up to such an important match, preventing such thoughts from getting into the players’ heads is one of the most important roles of the coach or manager. Every single person on the pitch at Stade de France is an elite athlete. Regardless of what you frequently read in the media, as far as being athletes is concerned, there is no such thing as a ‘bad footballer’ at this level of the game any more. Those who think there is are merely betraying their own ignorance. There are players who are a bad fit for a system, whose confidence is low, who are especially prone to injury, but in a world in which the average player earns multiple times in a week what the average worker earns in a year, there are no bad ones.

But the head is prone to injury, and that injury can be psychological. We’re all familiar with instances of players who’ve gone into a match in the wrong headspace: whether that’s burning with an anger that makes their dismissal inevitable, so revved up that their tackling is reckless to the point of dangerous; or just carrying the gait of someone who’s already lost the game in the head. Real Madrid know this, and it’s highly unlikely that Benzema would have made his comments without the tacit approval of the head coach and ultimately the club itself. And while it may seem all-consuming for those among us who spend more time than is good for us on social media, the chances are that all involved are having a big old chuckle at the big, dumb outside world taking it a little all too seriously yet again.

Real Madrid’s run to the final of this year’s Champions League has felt at times as though it has come about through force of personality alone. In all three of the knockout rounds they have had to go toe-to-toe with elite-level opponents, and through playing as though staring them down, have seen all three crumble in front of them. PSG’s was the most startling of all: a complete on-field rupture in which some of the world’s best players, united in this fundamentally dysfunctional squad, fell apart as the screw was turned on them. Chelsea and Manchester City also found themselves on the end of a less exaggerated version of the same phenomenon. Remember when Chelsea were 10 minutes from winning the quarter-final? Or when Manchester City were two goals up with a minute to play in the semi-final?

Real Madrid has never lost a UCL when they beat defending champions. Liverpool is really good, but when you have beaten Manchester City, Chelsea, PSG and Inter Milan to reach the finals you feel like Arnold Schwarzenegger from Terminator 2.

And this is the pressure that the wealthiest can exert. Real Madrid have a consistently pliant Spanish media at their disposal, planting transfer stories and trying to unsettle the players the club wants. It’s relentless, a 24-hour industry that it built to remind everybody constantly that Real Madrid are the biggest and will get what they want, whether you like it or not. And against three successive ‘new money’ clubs in the knockout stages of this year’s Champions League, the opposition blinked first.

But interestingly, this very week has seen the puncturing of some of that impervious air, with the news that Kylian Mbappe had opted to pledge his future to PSG rather than, as Real had assumed for a very long time, making a switch to Madrid this summer. Their reaction to this has shown just how ingrained that sense of entitlement is, with spluttering articles in the press and even an angry statement being made by La Liga on the subject – and an equally stupid response from Ligue Un. It’s tempting to believe that the decision to confirm this was timed mischievously, in an attempt to sow a seed of doubt into Real Madrid minds ahead of the biggest match of even their season. For the lulz, as it were.

But that’s one of the things about monarchies, isn’t it? They seem perpetual until they aren’t any more, and their ends can be very sudden indeed. Liverpool supporters old enough to be able to remember the early 1990s already know all about that. Following the European Super League debacle – and it’s worth remembering how much influence within UEFA PSG have built up in recent years – and the largely self-serving complaints about financial fair play and the distorting effects of oil money from the clubs who’ve always had and forever want the biggest advantage due to their own revenues, lines are being drawn in a wider battle between old money and new. Those lines aren’t necessarily clean. Real Madrid and Liverpool may ostensibly seem to be on ‘the same side’, for example, but there remains enough unhappiness at how much bigger the Premier League’s television deals are than any other European country for all English clubs to be viewed with suspicion.

This time last year there was a feeling that new money had won, with Chelsea and Manchester City playing in the final. But now Roman Abramovich has gone from Chelsea, while Manchester City stumbled at the final hurdle last year and the penultimate stage this year. Oil money won’t win this time, but this week’s news from Paris might well have caused a flicker of self-doubt in Madrid. Against this background, it might not be that much of a surprise that Benzema felt the need to reassert his belief that Real Madrid should be the favourites to win this particular match, even though the bookmakers have Liverpool at 8/13 to win in Paris. Having chucked a grenade of their own with less than a week to play before kick-off, PSG may well be smiling quietly to themselves at the fallout from their transfer bombshell.