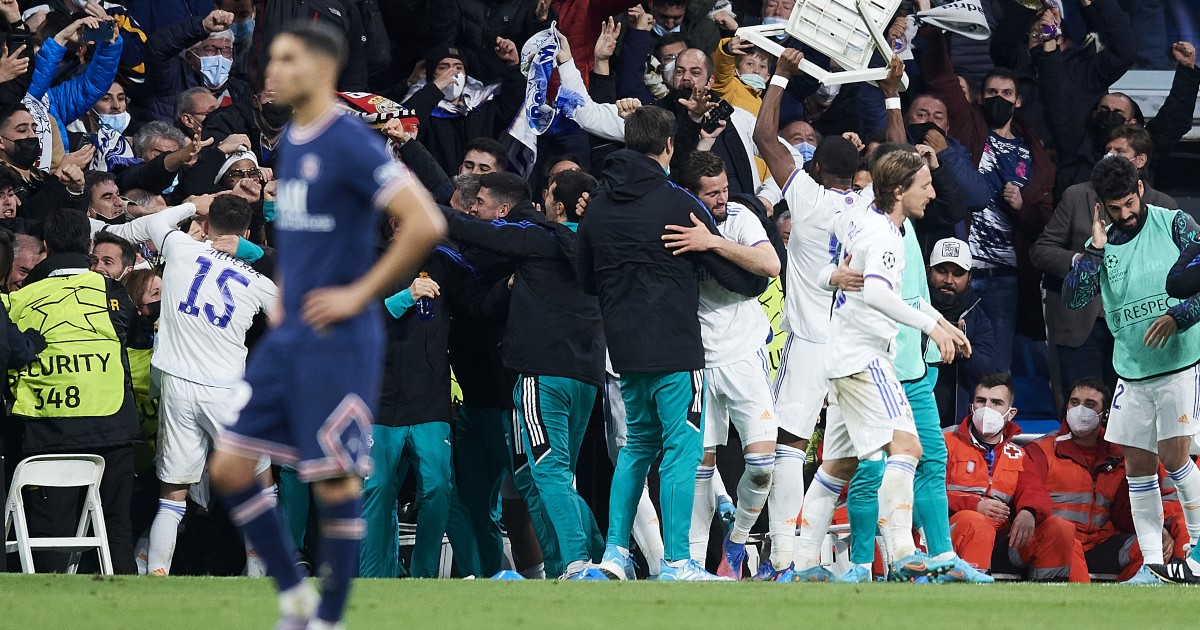 Paris Saint-Germain panicked and collapsed against Real Madrid, who were more than happy to prove that Kylian Mbappe deserves far better.

For all but half an hour of this Champions League tie, Kylian Mbappe was king. He was the object of all attention, the pre and post-match focus, the desirable commodity one team owns and the other so publicly covets.

He was, crucially, the solitary goalscorer across 150 of the first 180 minutes.

Save for the joyless enforcement of The Rules, Mbappe would have added another giant Spanish scalp to his collection. He achieved immortality with a hat-trick against Barcelona at the Nou Camp 386 days ago; three more strikes to vanquish Real Madrid at the Santiago Bernabeu should have solidified the sort of legacy an ordinary 23-year-old is only able to achieve through the medium of video games.

Yet only one counted: a thunderously brilliant near-post finish after intricately removing the soul of Thibaut Courtois by glancing at the far angle and opening up his body. So masterful is Mbappe that even his profession of adoration for Thierry Henry in the build-up felt like a premeditated planting of a particular seed in the goalkeeper’s mind.

clever from Mbappe: first he does a load of interviews talking about how much he admires Thierry Henry, then he cuts in from the left and slams his finish in at the *near* post

Five minutes earlier, Mbappe had scored with a similar finish of precise deception, but Nuno Mendes had strayed marginally offside. Then in the second half and with Real Madrid at his mercy, the French forward was slipped in behind by Neymar before beating Courtois without taking a single touch. Mbappe, during his words of fondness for Henry, had spoken of a desire to emulate Ronaldo. O Fenomeno was certainly present in that ludicrous stepover that felled the goalkeeper and presented an empty net.

Mbappe had 14 touches thereafter. One of the last resulted in a goal-kick after a pitiful attempt to dribble past Lucas Vazquez, having tormented Dani Carvajal to the point of the yellow-carded right-back’s necessary substitution. Two of the others were kick-offs, separated by 12 seconds of in-play action.

Paris Saint-Germain were going through as late as the 75th minute. They had stumbled from a position of strength, Gianluigi Donnarumma inexplicably inviting pressure from Karim Benzema with no inclination as to how he could possibly relieve it. The goalkeeper was pushed off balance in his own area, spooning a clearance to Vinicius Junior, who centred for Benzema to equalise on the night. But Real Madrid still trailed 2-1 on aggregate and, the conceit of away goals removed, the balance was divine.

The visitors were a mess of panicked clearances and fragile masculinity. Marquinhos had randomly backheeled the ball across his own area in the first half and that set the belated scene for this farce. But the bizarre aspect of their latest collapse is that PSG had steadied themselves: between the 67th and 72nd minute they deigned to keep the ball, claiming 78.3% possession and arresting that rising momentum.

Almost immediately after that guise was dropped, Vinicius Junior skied from six yards out after a peculiar Mendes mistake. Then Luka Modric strolled through the vague shambles that PSG’s midfield had become, trading passes with Vinicius before threading a gorgeous through ball for Benzema to finish. And the French side’s latest endemic failure of character was completed when Marquinhos flicked an anxious clearance into the path of Benzema to score his hat-trick.

He and Modric dragged this result out of Real Madrid through sheer willpower and force of talent. Benzema seemed to sustain himself on the broken self-belief of the opposition defence, growing ever powerful with each mistake. And the Croatian behind him was breathtaking; Modric breaking up a paltry attack in his own half and carrying the ball out to start the move he crowned with a sensational pass for the third goal was as good as anything Mbappe managed over these two legs.

It was supposed to be the evening on which the sport’s heir apparent ascended to the throne in what many consider to be his natural future home. Mbappe’s time will come and Real Madrid might consider this a two-fold victory in terms of coaxing him to Spain. But the difference was made by a 34-year-old forward and 36-year-old midfielder. They are not ready to hand over to the next generation just yet.