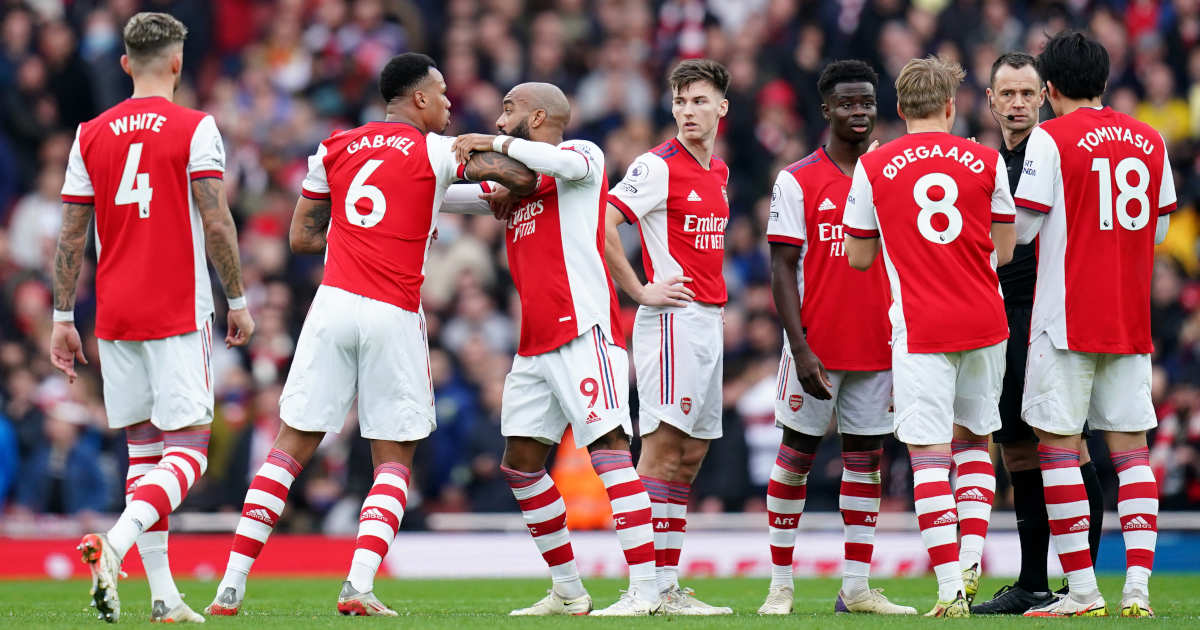 It looks like a four-way fight for one remaining Champions League spot as 2021 gives way to 2022, so here’s a reason why each of the contenders will succeed… and why they’ll fail.

We’ve been through a list of reasons to be cheerful and fearful for the clubs in danger of relegation, so give that a read as well, why not.

Arsenal (20 played, 35 points)
Reasons to be cheerful: After three games, Arsenal were something of a laughing stock, and it seemed unlikely that Mikel Arteta would last into the autumn. But four months on, something has clicked at The Emirates Stadium. The Process is starting to bear fruit, and reasons for optimism have come to outgrow reasons to be fearful. Emile Smith Rowe and Bukayo Saka have been outstanding, Aaron Ramsdale has turned out to be an inspired signing, and Gabriel Martinelli is more than repaying the faith that was shown in paying £6m to bring him to London from Brazil in 2019.

The surest sign of the growth in confidence that has accompanied their improvement in form came with the reaction to losing at home to Manchester City. Six months earlier, this result would have been soundtracked by a cacophony of boos and AFTV regulars losing their minds. Even the potential car crash that the falling-out with Pierre-Emerick Aubameyang might have become seems to have been averted. Now, it’s all a conspiracy theory concerning PGMOL. It’s an unusual form of progress, but it’s progress nevertheless.

Reason to be fearful: There is a school of thought that Arsenal’s decent autumn had an element of mirage, brought about by their weak start to the season, that after three straight defeats underwhelming performances against Norwich, Watford and Burnley were grabbed and clung onto for dear life. Recent performances – their four-match winning run against moderate opposition saw them score 14 and concede just 1 – have diminished this idea, but there does still seem to be a gap  between Arsenal and the teams above them in the table.

They’ve played six matches against the other ‘Big Six’ clubs, but their only win from these came against a Spurs side who were in an even darker place than Arsenal, and Spurs – their next Premier League opponents – have been transformed since then. Unless Arsenal’s form against the other ‘Big Six teams’ improves for the return matches against Spurs and Manchester United, they could find that fifth or sixth place is a more reasonable expectation for the end of this season than fourth.

West Ham United (20 played, 34 points)
Reasons to be cheerful: On Boxing Day, it looked like it was all over. Nobody expected West Ham to be knocking on the door of the Champions League last season and nobody expected them to repeat the trick this time around, and losing 3-2 at home to Southampton stretched their poor run to one win in seven matches. It looked as though they’d finally run out of steam, worn out by a punishing schedule of Premier League and Europa League football.

But by New Year’s Day, the Hammers were happy again. Seven goals in two matches against Watford and Crystal Palace have returned the smiles to the faces of supporters and reminded all of us of how they came to be in that lofty position in the first place. Superb goals from Michail Antonio and Manuel Lanzini were timely reminders of the talent that has emerged at West Ham under David Moyes, and they retain the services of Declan Rice, a player who continues to turn the heads of those at the very top of the table. If West Ham’s post-Christmas revival is as substantial as the Watford and Palace games have suggested, they’re absolutely not out of this race.

Reason to be fearful: It’s not surprising that, of all the teams with a chance of snatching a Champions League place this season, West Ham’s squad looks the thinnest, and with fatigue as a result of the punishing schedule looking more likely than not for all clubs, the January transfer window could be particularly important for them. The involvement of Daniel Kretinsky may prove important here, but it also worth remembering that West Ham fans’ support of the club’s owners can be fragile and that the current detente between supporters and the club itself has very much been engineered by David Moyes’ team itself. Should that form falter, unhappiness might not be that far from the surface at The London Stadium again.

Tottenham Hotspur (18 played, 33 points)
Reasons to be cheerful: It says something for how low things had sunk at Spurs that one of the most impressive things about Antonio Conte’s first few weeks with the club was that they managed a couple of wins that didn’t feel like sweat-drenched tensionfests. There were times under Nuno Espirito Santo when it felt plausible that they might not win another game this season, but the Conte revolution has blown some life back into their cheeks, as though the players needed to be reminded that, yes indeed, they are exceptionally talented athletes who are plenty capable of beating the best.

Harry Kane has – better late than never, cynics might argue – started scoring goals again, Lucas Moura looks transformed as a player, and even reports of the imminent end of Dele Alli’s career started to look a little overstated. Changing manager never guarantees a change in fortunes, but Conte’s methods have made Spurs look transformed from the side brushed aside so easily by Arsenal, Chelsea and Manchester United earlier in the season, while a place in the Carabao Cup semi-finals makes the possibility of a first piece of silverware in almost a decade and a half feel like a possibility. If they win their games in hand, they leapfrog both Arsenal and West Ham to go into fourth place in the table.

Reason to be fearful: Lads, it’s Tottenham. A cliche, yes, but if you believe in the theory of ‘Spursiness’ as being deeply ingrained into the DNA of the club, then it’s worth asking whether a couple of months is long enough for one manager to rid the club of a culture that seemed to invite disappointment, or even how this might come to manifest itself in the second half of the season. Conte has also been an undoubted beneficiary of a kindly early fixture list which is all about to change. Bearing all of this in mind, their next Premier League match is against Arsenal on January 16. Just sayin’.

Manchester United (19 played, 31 points)
Reasons to be cheerful: Well, Cristiano Ronaldo scored 47 goals during 2021. It’s nice that at least he’s happy, isn’t it? The day after a first home defeat against Wolverhampton Wanderers for the first time since Dave Sexton was their manager probably isn’t the best time to be finding reasons to be optimistic for Manchester United, but their first-team squad remains a collection of extraordinary talent, and this remains the case despite recent performances having hinted at the return of gravity following the new manager bounce of Ralf Rangnick’s appointment. And if the previous four matches hadn’t seen particularly stellar performances either, then at least they resulted in 10 points from 12.

Getting the defence functioning is Rangnick’s key task. Wolves are now one place and three points below Manchester United in the table, but while United have scored more than twice as many goals this season, they’ve also conceded almost twice as many too. In a sentence that no-one predicted, the return of Phil Jones to the centre-half position against Wolves was one of the few positives that they could take from an otherwise dismal night. If Rangnick can get his defence functioning like a unit rather than like a collection of loosely-acquainted individuals, performances such as those seen over the course of the Christmas and New Year period can still be banished to the memory. All this and they’re still in this year’s Champions League, too.

Reason to be fearful: The suspicion remains, even among some of those who haven’t already hitched their flag to the ‘Rangnick Out’ bandwagon, that the rot at Old Trafford continues to run far deeper than any one manager could ever hope to fix on his own. Cristiano Ronaldo may have scored 47 goals in the calendar year, but that doesn’t alter the fact that he left Juventus with them having almost failed to qualify for the Champions League and that Manchester United remain in seventh place in the Premier League. Manchester United’s players continue to act as a collection of individuals only recently introduced to each other rather than a team, and perhaps the biggest concern that Manchester United face as they challenge to return to next year’s Champions League is whether a temporary manager will even be able to instil the discipline that their players seem to need so much at the moment.