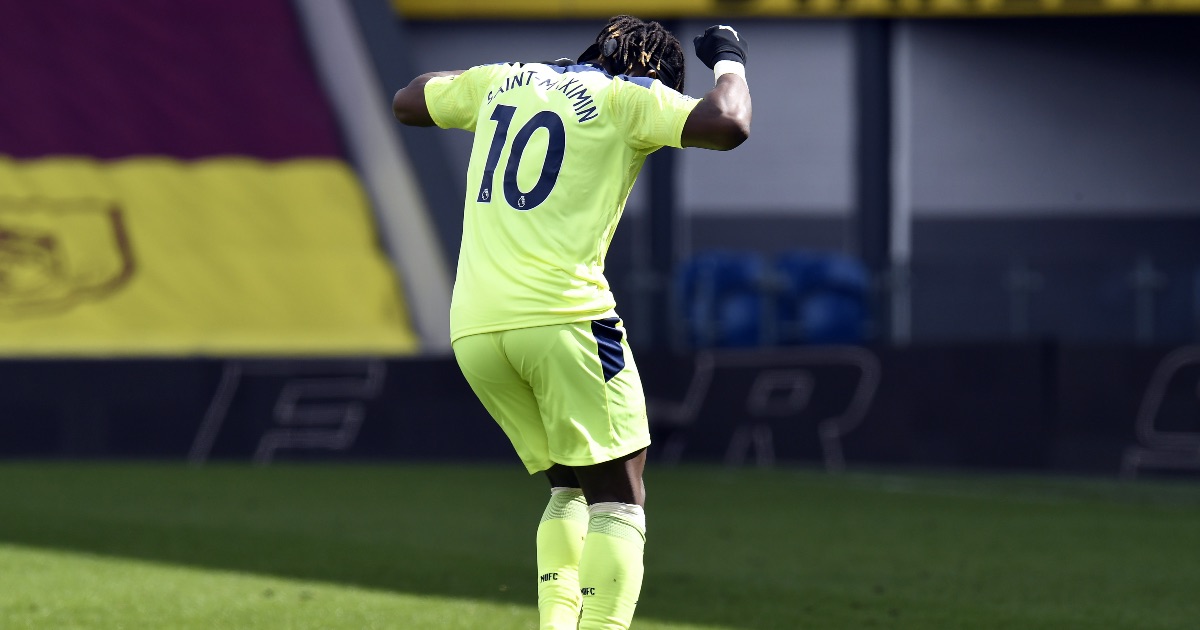 Newcastle owe this win entirely to Allan Saint-Maximin – a special player the likes of which other relegation contenders cannot call upon. He could and should be enough to save them.

“Second balls, lads!” shouted the manager of every relegation-threatened team in the history of football. The phrase on which Sean Dyche has built Burnley’s Premier League success will also surely have emanated from Steve Bruce’s lips both before kick-off and frequently throughout Newcastle’s 2-1 win at Turf Moor.

He may even have uttered the words as the ball fell for Ashley Westwood after a hopeful punt forward was headed clear by his defence, before realising there was no Newcastle player anywhere near the Burnley midfielder.

The defending from there was no better, as Chris Wood took Westwood’s pass in his stride, beat Ciaran Clark far too easily to the byline, before pulling it back for an unmarked Matej Vydra to tap the ball past four superfluous Newcastle defenders and Martin Dubravka on the goal-line.

Newcastle were severely lacking in the non-negotiables in a first half in which they should have had a penalty for James Tarkowski nearly kicking Sean Longstaff’s block off, but offered very little besides. There’s no excuse for the lack of urgency, commitment and desire in the absence of quality that Bruce bemoaned before kick-off.

“Look, arguably they’re our best players, so when you’re without your best players, then of course…” Bruce said when asked about Toon’s struggles without the combination of Allan Saint-Maximin, Callum Wilson and Miguel Almiron. “I don’t think I’ve been able to play them all season together, which has been a frustration, of course.”

Saint-Maximin and Wilson joined Almiron from the subs bench ten minutes into the second half; the impact was extraordinary.

Saint-Maximin’s first action – as it always seems to be – was to run straight at the Burnley defence, who backed off into their own box as he body-swerved in front of them, checked back and laid the ball back perfectly for Jacob Murphy to sweep the ball into the far corner.

Saint-Maximin’s second action was to score himself. If the penetrability of Burnley’s pants fabric was tested after the Frenchman’s role in the opener, it was completely overcome as he scored the winner – they entirely sh*t themselves.

He picked the ball up in his own half, ran at Ben Mee and Tarkowski, before chopping the ball from his right to his left in the box before whipping his shot inside the near post. It was a devastating nine-minute spell, worthy of the jig Newcastle’s one truly exciting footballer danced in celebration.

But they do have Saint-Maximin – a better player than any other involved in the relegation battle. Again, he could and should be enough.