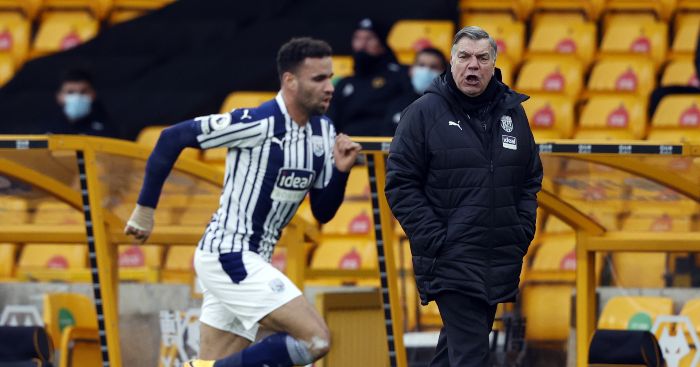 At half time against Wolves Sam Allardyce’s attempt to guide West Brom to safety this season looked like a survival trick too far. By full time he and his Baggies side had given themselves half a chance with a 3-2 victory in their biggest match of the season.

Following a brutal introduction to life back in the Premier League at home to Aston Villa, Allardyce helped himself to a point in his second match in charge against defending champions Liverpool. That glimmer of hope at Anfield was soon forgotten though, as three terrible displays followed. Leeds United and Arsenal hit a combined nine goals against them in two matches before they crashed out of the FA Cup to League One side Blackpool on penalties.

Despite the Baggies still having the look of a side that could blow their lead at any point, it was a much-improved display from the one that saw the Gunners run riot at the Hawthorns in their last Premier League fixture. Matheus Pereira put the Baggies ahead in the Black Country derby after eight minutes on Saturday after Callum Robinson was brought down just inside the penalty area. Two quick-fire goals from Fabio Silva – who scored his first goal at Molineux – and Willy Boly had Wolves fans dreaming of bragging rights at the interval before Allardyce got West Brom firing again in the second half.

2 – Matheus Pereira is the first player to score two penalties in a Premier League match for a newly promoted club since Chris Brunt also did so for West Brom against Liverpool in April 2011. Spotted. pic.twitter.com/WaQlwbed6O

A wonderful header from Semi Ajayi on 52 minutes got the Baggies back level before Robinson was felled in the area again just three minutes later. Up stepped Pereira to score his second and give Allardyce’s men the lead. Considering West Brom’s defensive record it was a surprise to see them hang on for all three points as Wolves threw everything at them in search of an equaliser. The defending for the two goals West Brom conceded was poor but credit has to go to centre-back pairing Kyle Bartley and Ajayi, who were key to helping them hang on and defended well throughout.

Allardyce has been labelled a ‘survival specialist’ for previously guiding Sunderland, Crystal Palace and Everton to Premier League safety after joining them in the relegation zone. The task of doing the same at West Brom still seems a tall order despite the crucial result at Wolves. It was only their second victory of the campaign with the other win coming against rock-bottom Sheffield United, who only picked up their first triumph of the campaign at Newcastle United on Tuesday. The major problem Alardyce still has is their inability to defend properly as a team. As good as they were at Molineux, they still managed to ship another two, which means they have now conceded 41 goals in the league this term. That figure is by far the worst in the Premier League with Leeds United (33) the next on the list of goals conceded.

That has been compounded by their lack of goalscoring prowess, with only Sheffield United and Burnley possessing worse records in front of goal. Put together, it is a lethal combination, that more often than not spells relegation  – but the three goals scored on Saturday will provide ‘Big Sam’ and the Baggies with some solace. If Allardyce can continue to get the balance between attack and defence right, like he did at Molineux and at Anfield, then West Brom will give themselves a chance. The win moves them onto 11 points for the season, which amazingly means they are only three points from 17th-placed Brighton.

2 – Wolves have lost both of their Premier League games in which Fábio Silva has scored (also 1-2 v Burnley in December), making him the youngest player ever to lose both of the first two Premier League matches in which he scored (18y 181d). Unfortunate. pic.twitter.com/nJAtdtZ2LO

The pressure continues to build on Nuno Espirito Santo, meanwhile, with the Wolves boss under pressure after a poor run of results. Losing to West Brom will hurt more than any result considering the rivalry between the two clubs – with the Baggies winning the last clash 5-1 at Molineux in 2012 when Peter Odemwingie scored a hat-trick – but the loss means Wolves have now earned just two points from their past six Premier League matches. Nuno’s men have now gone behind in nine consecutive league games and are now without a clean sheet in the last 12, which is the longest current run by any Premier League side. Their dismal form has coincided with Raul Jimenez suffering a fractured skull against Arsenal, with Wolves only winning once since the Mexican has been out injured.

Nuno, who keeps switching between four and three at the back, described the match against West Brom as a “must-win” not only because they were playing their local rivals but also because of their terrible form. It still seems unlikely that they will be in relegation trouble, with the likes of Adama Traore and Pedro Neto in their armoury, but the gap to 18th-placed Fulham is now ten points and every side below them has at least one game in hand. It isn’t time to panic yet but a couple of poor results against Chelsea and Crystal Palace could put Nuno right up against it.