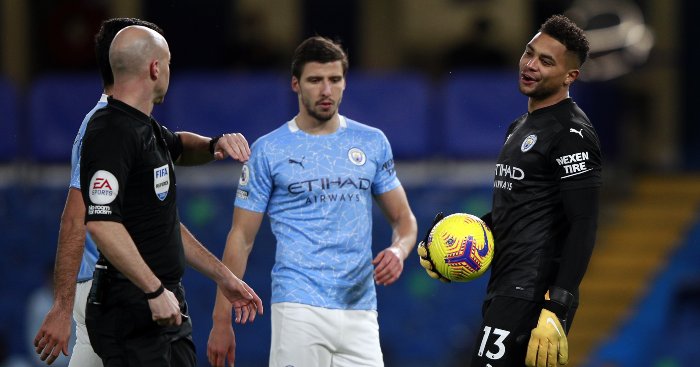 There’ll be many a Manchester City fan that knows about the old 53 bus route. Many of them will have used it to get to Maine Road right up until the club left the stadium in 2003, passing, as it did, through Rusholme and Moss Side. Anybody who has used it will know that it had a reputation for being a little… unreliable. Some nicknamed it the banana bus, because they’d turn up once an hour in bunches of three or four, despite being scheduled for one every 20 minutes.

This Xaverian College alumnus once walked the 53 bus route home – a grand journey of about 90 minutes – without a single one passing him.

This overly-detailed opening serves as a pretentious yet functional analogy for something Manchester City fans have been treated to in their last couple of Premier League games. The lesser-spotted ‘goalkeeper picking up a backpass’ has featured in City’s last two league games, after not making any appearances since 2019 – and none before that for roughly 20 years.

For some reason, despite the free-kick remaining indirect, Chelsea had to take theirs from outside the area (one can only assume referee Anthony Taylor had completely forgotten what to do in that situation). Manchester City, meanwhile, had the pleasure of their kick being inside the box, though both teams were treated to the 11-men-behind-the-ball charge that invariably comes with indirect free kicks so close to the goalline.

It’s almost like a once-in-a-generation thing – and seeing them result in a goal is an even rarer event. Like corners, indirect free kicks in the box are not nearly as dangerous as fans think they are and the excitement felt when one is awarded is almost always disproportionate to the threat they actually pose. So, with all that in mind, let’s remember a time when City did what City used to do – and f**ked up when they had everything under control.

It was late April 1998 and Manchester City were in trouble. Real trouble.

With two games of the First Division season remaining, Joe Royle’s side were third from the bottom, two points from safety and three points behind their next opponent at Maine Road: QPR. Victory would take them above their opponents on goal difference and keep their survival in their own hands. Anything else would all but grant safety to QPR instead.

And it had started so well, with Georgi Kinkladze opening the scoring through a free-kick in the first 60 seconds. That, though, was predictably where the game peaked for City – and they were 2-1 down only 20 minutes later. Everyone remembers the goal that put Rangers into the lead, with Jamie Pollock expertly lobbing his own goalkeeper with a header that’s listed on YouTube as the ‘Funniest Own Goal’.

But, because of that farce, nobody ever remembers how the visitors had equalised in equally ridiculous circumstances.

🎙️ Scorer of the best/worst own goal of all time, Jamie Pollock, explains how @QPR fans took kindly to him after the worst moment of his @ManCity career.

With City settling into their stride a goal up, the ball was knocked back to Martyn Margetson in the home goal. Not thinking it was an intentional return, the goalkeeper picked it up and the referee blew, pointing for a free-kick inside the box.

City didn’t get chance to set up in that 11-man wall that always seems to defend the goalline as, when Rangers striker Kevin Gallen asked Margetson for the ball, he handed it over instantly. It was like one grand metaphor for the fight City had put up to avoid relegation that season, since Gallen simply squared it for Mike Sheron to pop into the open goal.

Years later, ahead of City’s more famous end-of-season game against QPR in 2012, Gallen wrote about the day in the Daily Express. He remembered: ‘As soon as he [the referee] gave it, I asked Martyn for the ball. I put it down and squared it for Mike Sheron, who rolled it into an empty net.’

Despite a 5-2 win at fellow strugglers Stoke on the final day of the season, Manchester City went down as results elsewhere went against them. Had they not imploded against QPR the weekend before, they might just have survived.