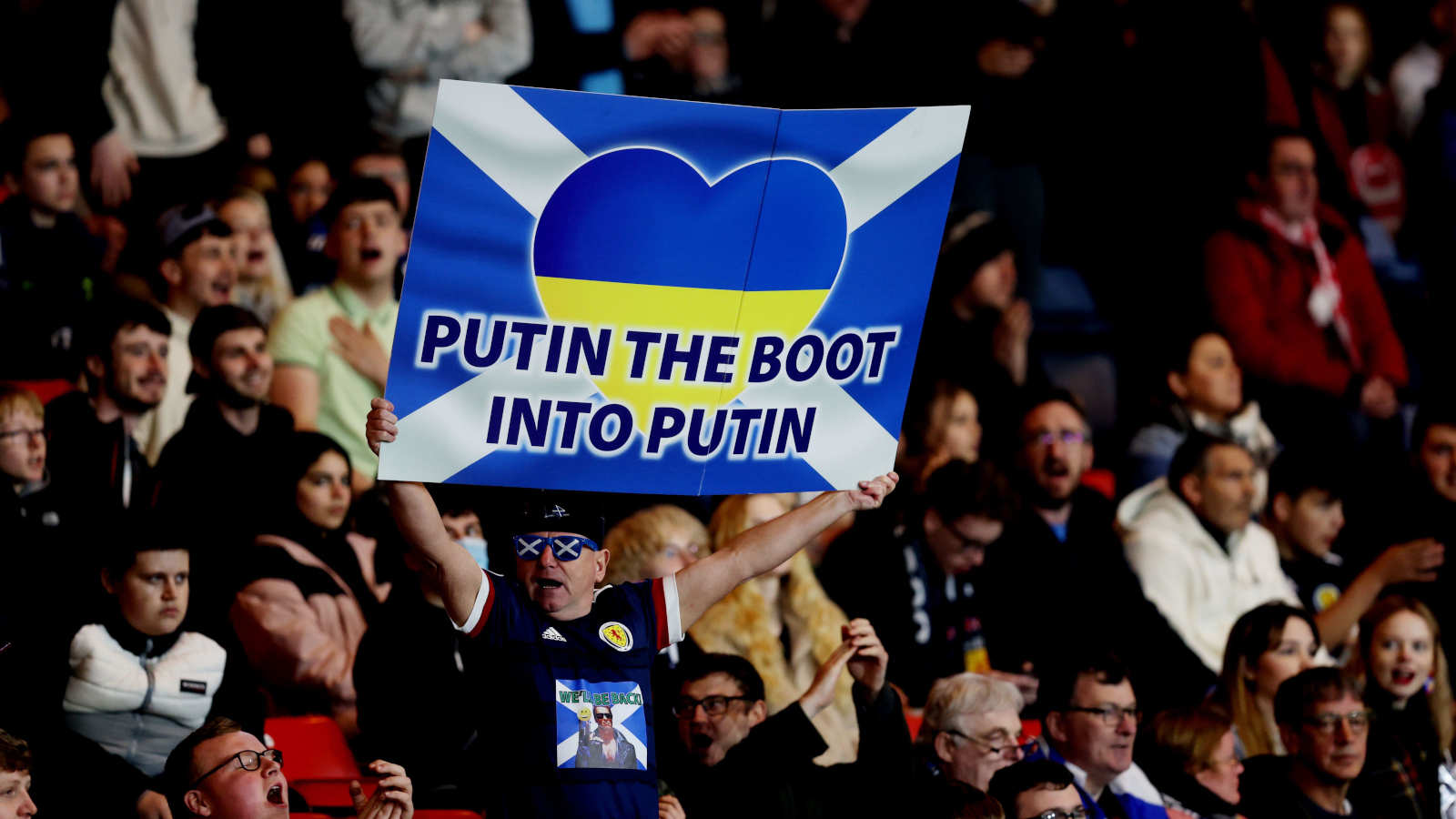 Scotland v Ukraine will be a football match like no other, and it will make a mockery of the idea that sport and politics can be kept apart.

It seems doubtful that there will be a more emotional game this year. Under normal circumstances a World Cup play-off between Scotland and Ukraine would have been fair-to-middling in terms of global attention. But these are not normal circumstances, and in the case of this particular match, that applies to Scotland as well as the team they’re hosting. A quick search for ‘Scotland vs Ukraine’ on Google News brings up two stories, side by side. ‘Scotland vs Ukraine: What does the World Cup play-off mean to Ukrainians?’, ask Sky Sports. ‘What will the Scotland match mean to Ukrainians?’, asks the BBC. This gives some idea of the scale of the task when Scotland take to the Hampden Park pitch for this fixture.

When the draw was made in November, the mood was that it could have been worse. This is only the first half of the World Cup play-offs. The winners of this match still have to play away to Wales (who beat Austria in their game in March) in Cardiff for a place in Qatar. It’s one of the inherent contradictions of play-offs that for all the effort that goes into qualifying, for most it’s just a postponement of disappointment; the realistic view to take of Scotland’s route to the finals was that it was difficult – with only one in four qualifying – but achievable and certainly not as bad as it could have been, with Portugal and Italy among the other teams needing a second bite at qualification.

But then war was foisted upon Ukraine, and the dynamic of this game changed. It should go without saying that the horrors of that country supersede all other subjects, and footballers in Ukraine have the same frightening stories as everybody else. It was reasonable to initially ask whether this game could even take place. Less than half of their squad were based abroad, and with conscription coming in for all men between the ages of 18 and 60 and no indication of what the war might look like in three months’ time, Ukrainian resignation from the tournament seemed at the very least plausible.

The government evidently thought otherwise. The Ukrainian people did not buckle as their Russian invaders had expected, and they remained in control. And they clearly understood the importance of keeping their flag in the public eye, arranging exemptions from martial law and permits to allow domestically based players to leave the country to prepare for future games at training camps. Six players – Taras Stepanenko, Serhiy Kryvtsov and Mykola Matviyenko of Shakhtar Donetsk, along with Serhiy Sidorchuk, Mykola Shaparenko and Heorhiy Bushchan of Dynamo Kyiv – confirmed that they would be joining the military. In a sobering reminder of how close this war is, five of those six are in the current squad.

But the force of public support for Ukraine across Europe in the face of such dehumanised aggression has been very strong indeed, and nowhere was this better demonstrated than at Eurovision a couple of weeks ago, when a huge public vote swept their entry to victory. And it served as a reminder that Ukraine will likely have the world on their side in Scotland. And that doesn’t feel like overstatement. This will be the Ukraine team’s first match since the invasion.

And, with the obvious caveat that these things are all obviously relative, this does put Scotland in something of an unenviable position. Damned if they win, out if they don’t. There were calls from some for them to stand aside and allow Ukraine to proceed to the finals, but these were quickly cast to one side; the last thing that Ukraine needs is to be patronised by the rest of the world. For all the impossibility of their situation, the only way in which the world really can continue with cultural events like this has been to expel Russia and to try to continue as close to normal. The Scotland players already know this, and captain Andy Robertson has already confirmed as much.

There is little question that the roar that greets the Ukrainian national anthem at Hampden Park will be unlike anything heard there for several years. Scotland stands with Ukraine. Of that there is no question. But when kick-off comes between these two teams, with a place 90 minutes away from a World Cup finals, it would be condescending to all concerned to do anything bar treat it as close to any other match as possible. The Ukrainian government understands this. The other competitors at Eurovision didn’t perform their songs badly to let Ukraine win. They didn’t stand aside. They competed and the public voted as a valuable show of support. Those who were beaten took it in good grace. It was necessary.

There’s no public vote at the end of this match, so onlookers cannot directly influence the outcome. There’s little to go on in terms of form, either. The two sides have only ever met twice before, home and away in qualifiers for Euro 2008, and won one each by two clear goals. But the form guide might well have been a complete irrelevance even had they played each other multiple times before, with this game taking place at this particular time, and against this particular geo-political backdrop. Will the disruptions faced by the Ukraine players be outweighed by what they take from pulling on their national team shirt at such a time? Will Scotland be able to rise to the occasion themselves?

But more than anything else, the match between Scotland and Ukraine will serve as reminder that, for all the high-minded idealism that exists within the game’s governing bodies, football and politics cannot always be separated. Whatever happens on the pitch – and trying to predict this result feels like even more of a fool’s errand than usual – a good proportion of the world will be sending important messages to Russia by this game taking place in the first place. Ukraine still exists. It is a legitimate state and we will stand firm against Russian violence. No-one is glad to have to send these messages. No-one wants this precarious position in the first place. But these are messages that we have to send repeatedly, whether Moscow wants to hear them or not.