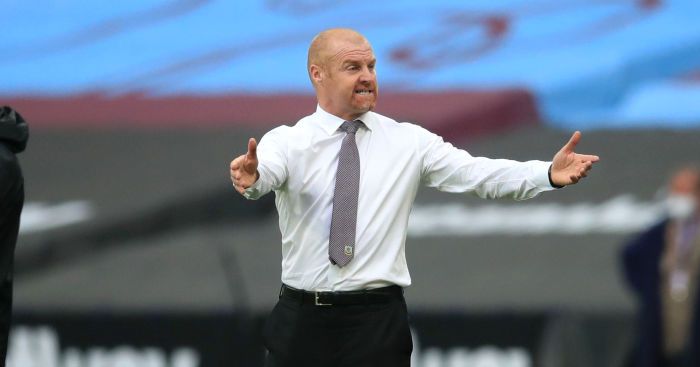 Sean Dyche is too good for West Ham, Crystal Palace, bloody Stoke and perhaps even Burnley. They absolutely have to do everything to keep him.

‘Is he the man to wake sleeping giants Aston Villa, breathe new life into Bournemouth or replace Roy Hodgson at Palace,’ was the start of a question no-one but the Daily Mail had previously bothered to ask for a reason. The inclusion of Norwich, QPR and Stoke when considering Sean Dyche’s potential suitors added insult to the sort of injuries he has been contending with at Burnley all season.

Victory over West Ham means the Clarets are anywhere between six and 22 places above Dyche’s supposed options. Based on bookmakers’ odds though they may be, it is difficult to imagine any other manager qualifying for Europe twice and being rewarded for his efforts with a Championship relegation battle.

A quietly astonishing run in 2020 has made the former a distinct possibility for a team now four places behind Manchester United. Liverpool (34) and Arsenal (26) are the only clubs to earn more Premier League points this calendar year than Burnley (25), whose sheer dedication to binary code has become impossible for opponents to compute.

That 5-0 destruction at the hands of Manchester City has been followed by scorelines of 1-0, 0-1, 1-1 and now 0-1 within a fortnight. These may be slim margins but few managers are quite as adept at cutting the fat.

The juxtaposition with events at the Etihad Stadium on Wednesday evening were stark. As Steve McManaman flicked through a misguided thesaurus to describe the middling job Steve Bruce has done at Newcastle as “brilliant”, “amazing”, “fantastic” and “incredible”, the commentators in east London were at pains to remind us that Dyche has a pub near Turf Moor named after him. He was recording a seventh win in 12 games to accompany yet another clean sheet while Bruce was masterminding a heavy loss.

It does not feel as though the Magpies will embark on the sort of post-thrashing run Burnley have so ably broken into.

They rely on elements of fortune, of course. That much was true at their apparent peak in 2017/18 when they timed their bursts of form to perfection. Not a great deal has changed since then – Nick Pope saves the few shots a determined defence fails to throw themselves in front of and the attack is varied enough to generally find a breakthrough – but there is no point in fixing what ain’t broke.

West Ham tried, as they do tend to. It wasn’t enough, as it often isn’t. Burnley blocked more shots (9) than they had (8) and Tomas Soucek and Michael Antonio were particularly wasteful.

The hosts would have been forgiven for glancing enviously at the away dugout and pondering quite how they had reached the stage where appointing Burnley’s manager would be such an obvious improvement. David Moyes is likely to achieve his objective but is the own-brand equivalent to Dyche’s four-four-f*cking meat and two veg. If you are going to cook a more basic meal with restricted ingredients, at least master the recipe.

That performance is the perfect example as to why I would go all out to get Sean Dyche at this football club.

He has built a good side at Burnley, and as frustrating as it was for us tonight, you have to admire the way they defend as a team and grind out results.

Dyche has proven over time that he is comfortably the best such chef in town. The ‘be careful what you wish for’ trope is often an ignorant and lazy line trotted out by unimaginative pundits to warn against more limited clubs getting ideas above their station, but Burnley chairman Mike Garlick ought to heed that advice. He would be a fool to lose his manager so carelessly.

Yet in truth, it is difficult to see where else Dyche could go. He is far too good for the teams he is linked with – and perhaps even the one he is at – yet too unfashionable and untested to be trusted with a bigger project. Burnley’s best asset is his own worst enemy. They should hold him as tight as their transfer budget.