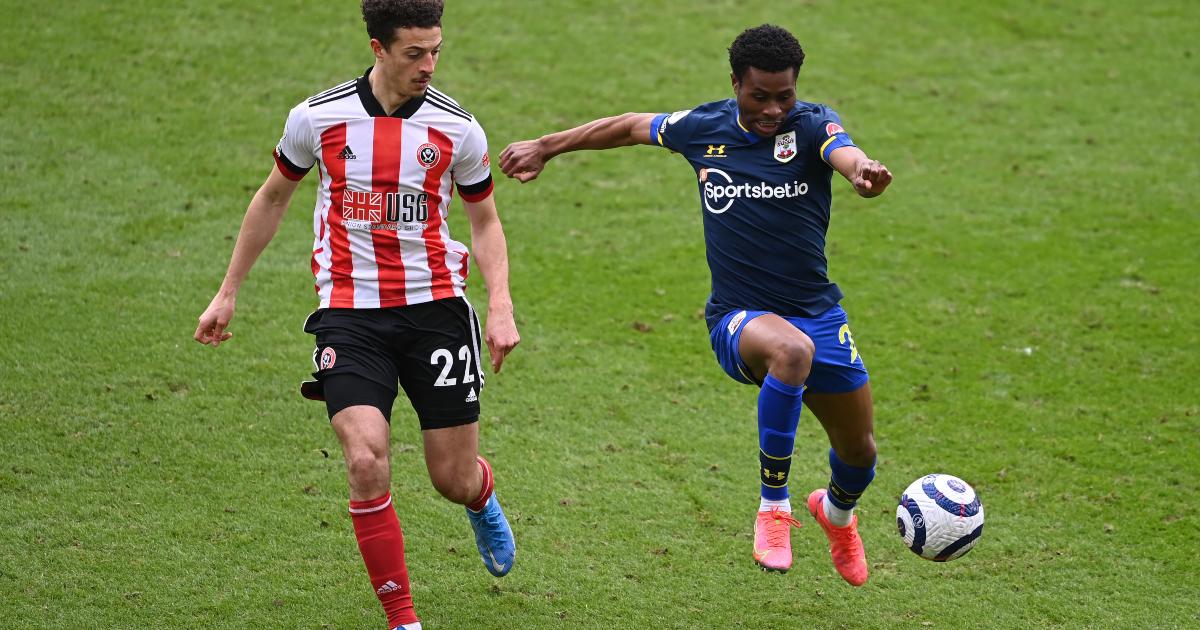 Chris Wilder has pulled plenty of rabbits out of his beanie hat for Sheffield United in the past and perhaps his greatest trick, an unfathomable act of escapology, was still on the cards prior to the weekend. But the Blades boss will now be packing away his wand and cape after his side’s hopes of a relegation reprieve disappeared before everyone’s eyes as Southampton stole the show.

Saints, in even worse form than United or any other side in the country, earned their first victory in 10 matches after Ralph Hasenhuttl showed he still had a few tricks up his own sleeve. One of them was the reappearance of Nathan Tella.

The 21-year-old midfielder was handed only his second start of the season and the former Arsenal schoolboy left the Blades bewildered. In an advanced role to get in behind the hosts’ makeshift rearguard, Tella carried the Saints’ greatest threat during a first half which everyone else looked understandably bereft of confidence.

With Blades bottom and Saints having taken only one point from their last 27, the opening goal was always likely to be decisive in determining the victor at Bramall Lane. The hosts had recovered only once this season from going behind and rarely did they look capable of doing so here after Tella’s elusiveness earned Saints a penalty following the cagiest of opening half-hours.

James Ward-Prowse’s spot-kick gave Saints a shot in the arm while Sheffield United’s confidence was simply shot. Tella had two of United’s three centre-backs in the book before the break with none of Wilder’s men able to get to grips with the rookie.

For the Blades, their 22nd defeat of the season was a succinct summary of their problems this season.

Wilder was without his entire first choice defence, as well as his first-choice reserve, and forced to select a rearguard which he hoped ‘might get us through this game’. With Chris Basham, John Egan and Jack O’Connell all injured, and Phil Jagielka suspended after a questionable red card in midweek, George Baldock, Ethan Ampadu and Kean Bryan formed a patched-up unit which looked stretched from the start.

They conceded daft, preventable goals. One long ball put Tella behind the Blades before Ampadu’s desperation curtailed his burst at the cost of a spot-kick. The second was even more infuriating for Wilder, but typical of the individual errors that have riddled United’s season and how they have been punished.

4 – Che Adams has scored four goals in his four Premier League appearances against former side Sheffield United, accounting for 44% of his total goals in the competition (4/9). Thriker. #SHUSOU

It seemed Blades had escaped when Aaron Ramsdale pushed substitute Che Adams’ shot to the feet of Baldock. But the hosts seemed insistent on giving Saints another go. From his reaction to his initial poor clearance, it appeared that the Blades’ wider plight had suddenly dawned on Baldock. His shoulders dropped and he slouched out, sulking rather than reflect on his good fortune that the ball had fallen to John Lundstram. Then Lundstram, with all the time he needed to pick a pass, only found the head of Ryan Bertrand. Baldock was favourite to reach the loose ball, but with the No.2 still moping, Stuart Armstrong sneaked in to lay the ball off for Adams to smash an exquisite half-volley beyond Ramsdale.

F365 Says: Saints too Strong to go down if they stick with Stuart

For all United’s faults this season, the perception has been that they have not let their heads drop. Until today.

Blades’ attacking play carried the same conviction as Baldock’s defending. They created openings – a couple for David McGoldrick and a free header from a set-piece for Bryan, all in the first half – but their finishing showed typical decisiveness of the lowest scorers in all four leagues.

A home win today against a previously-beleaguered Saints side could have been a platform for a great escape. Three points would have taken United above West Brom before the Baggies face Newcastle tomorrow. United have been denied the opportunity to build any momentum this term since all three victories were immediately followed by games against Tottenham, Manchester City and Thomas Tuchel’s Chelsea.

Here was an opportunity to belatedly build up a head of steam. Instead, their last hopes of survival disappeared in a puff of smoke.