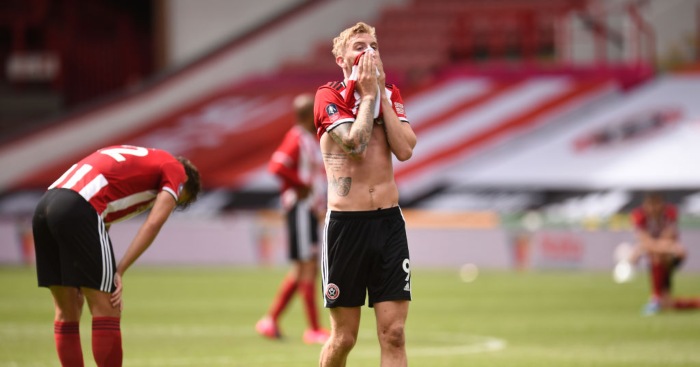 Sheffield United will have to pick themselves up again after Arsenal scored a late winner to beat Chris Wilder’s side 2-1 and knock them out of the FA Cup on Sunday. A third defeat in a row for the Blades means losing is now becoming a worrying habit for Wilder’s boys but there were encouraging signs against the Gunners.

After Sheff Utd had a perfectly good goal ruled out against Aston Villa in their first game back following the Premier League restart, everything has gone downhill for Wilder and his team. They drew that game at Villa Park with the failing goal-line technology costing the Blades an important three points towards their European aspirations. The Steel City side put in two terrible performances against Newcastle United and Manchester United, in which they conceded six goals in two 3-0 losses.

Defeat at Old Trafford meant that Sheff Utd had failed to score in three consecutive league games for the first time since September 2013. The Blades headed into their match against Newcastle on June 21 with the second best defensive record in the Premier League, only behind champions Liverpool, so conceding six goals in two games was very uncharacteristic from Wilder’s men. The lack of threat in front of goal, coupled with their recent leaky defence has seen their outside chance of Champions League qualification become increasingly unlikely, although playing in the Europa League next season still seems achievable. So the thought of playing Arsenal – whose own performances since the restart have also left a lot to be desired – in the FA Cup may have come as welcome relief for the Sheff Utd players.

It was a fast start from United, in their first game at Bramall Lane since March, with John Lundstram, hero of many a fantasy football team, bundling the ball home after nine minutes, only for VAR to disallow it for offside. That was as good as it got in the first half for United with Arsenal playing the better football up until the break. Chris Basham’s clumsy challenge inside the area on Alexandre Lacazette saw the lively Nicolas Pepe score past Dean Henderson from the spot on 25 minutes as the Gunners went in at the break 1-0 up.

Not the result we wanted but a fighting display from Wilder’s Blades.

On to Tottenham on Thursday 👊 pic.twitter.com/nAtmyrRR3V

Unlike on previous occasions since the restart, Wilder’s half-time talk seemed to galvanise his side, who played with a lot more purpose after the break. The lack of Jack O’Connell as the left-sided overlapping centre-back has left a huge hole in Sheff Utd’s style of play but they seemed to cope a lot better with his absence here. John Fleck seemed back to somewhere near his best after the break and he was able to help Enda Stevens out on that side of the pitch. Jack Robinson, who has filled in for O’Connell, has come in for a bit of criticism about his attacking play – but his long throw was a huge weapon for the Blades in the second-half. Time after time his throws found the head of Oli McBurnie who caused mayhem in the Arsenal box, with United having the better chances.

And it was from one of those long throws that the Blades found an equaliser with only three minutes of normal time to spare. Sead Kolasinac’s clearance from Robinson’s throw cannoned off Rob Holding and into McGoldrick’s path for an easy close-range finish. It was no more than the Blades deserved for their efforts. However, United again suffered for their newfound defensive fragility as they allowed substitute Dani Ceballos all the space and time in the world to slide the ball past the onrushing Henderson to grab a late winner.

It was the Blades’ fourth match in 11 days as the hectic fixture schedule takes hold with Tottenham next up on Thursday. Wilder will no doubt welcome the three-day break as he looks to do more than just allow the players to rest and recover between fixtures. There were hugely encouraging signs from the Blades with a degree of fluidity back in their play, especially in the second-half when their build-up play was good but was let down at times by the final ball. Some may say it was hard not to improve after their last two dismal showings but at least United are showing they are improving.

The break couldn’t have come at worse time for the Blades with an in-form fully-fit squad at Wilder’s disposal, while their rivals Man Utd and Tottenham were struggling with injuries. Wilder will be the last to use it as an excuse and the Blades must dust themselves down again quickly to inject some life into their Premier League campaign. It would be horrible to see Sheff Utd go out with a whimper after such an impressive first season back in the top-flight. Victory against Spurs on Thursday would keep them right in the European qualification picture.