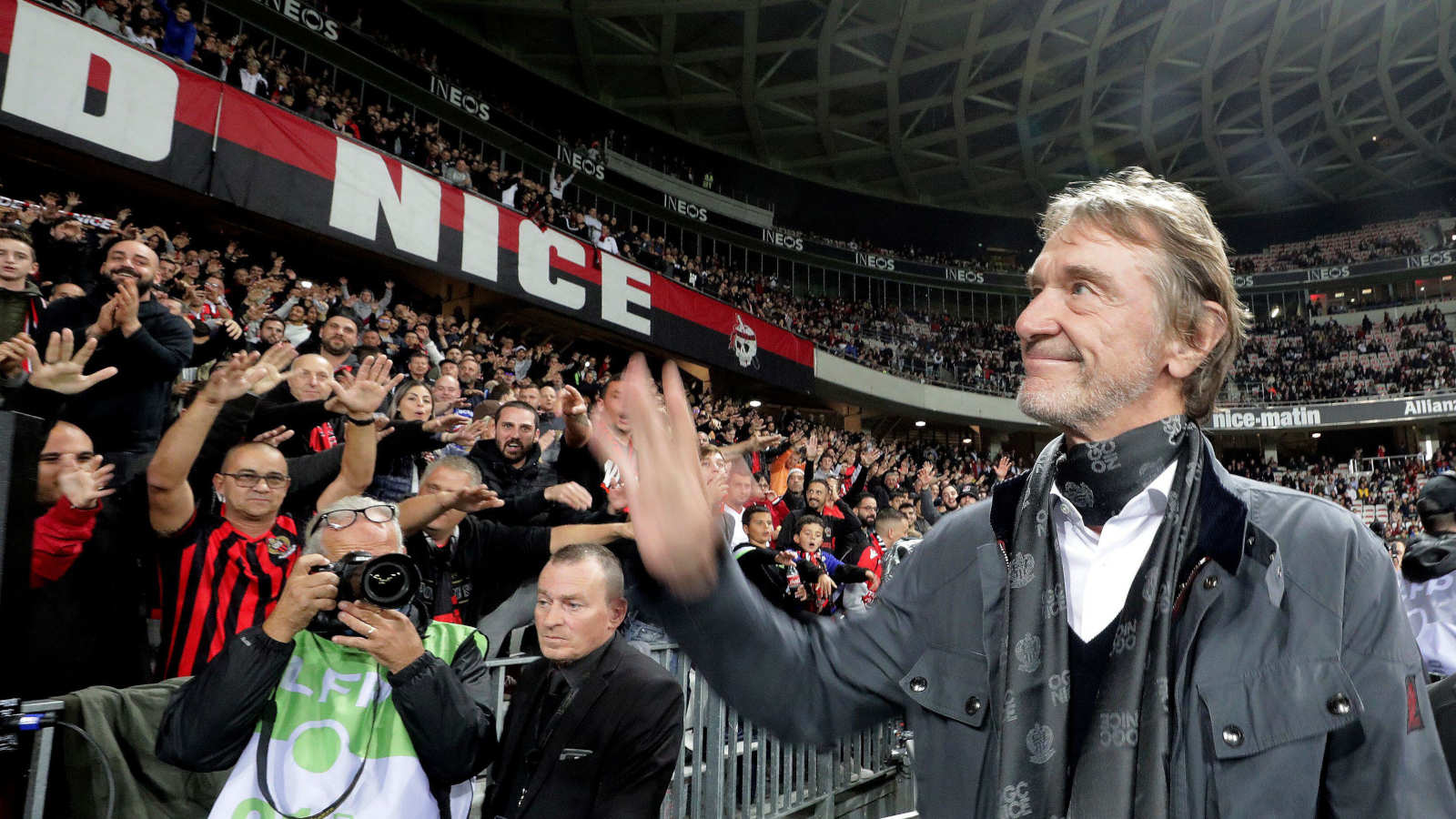 Sir Jim Ratcliffe is making moves towards being the new owner of Manchester United, but nobody can force the Glazers to sell the club.

For somebody once described by The Sunday Times as ‘publicity shy’, Sir Jim Ratcliffe sure has been making a lot of headlines in 2022. Earlier this year, he was one of the unsuccessful bidders in the race to buy Chelsea. And now, even though he’s being linked with buying Manchester United and releasing their fans from their Glazer-induced personal hell, the team that he already owns (OGC Nice) has been on a bit of a spending spree in the Premier League that is almost certainly not over yet.

The confirmation of his interest both is and isn’t a surprise. On the one hand, Ratcliffe is a natural fit for the club in the 21st century, being both a billionaire and a Manchester United supporter. But on the other, it is less than four months since he was bidding for Chelsea and even that bid seemed a little, well, half-hearted.

Ratcliffe’s involvement with the long-winded Stamford Bridge takeover was brief. His bid of £4.25bn was made directly to the club, bypassing Raine, the American bank given the job of overseeing the sale of the club after government sanctions were put in place against Roman Abramovich, and after the deadline for bids had passed, but the final decision was made to go with the consortium fronted by Todd Boehly. It is not clear why Ratcliffe’s bid came at such a late stage.

Ratcliffe is the chairman and CEO of the Ineos chemicals company in which he owns a 60% shareholding, and is believed to be worth in the region of £18bn-£20bn. His first involvement in football came in 2017 in Switzerland, when he bought FC Lausanne, and in August 2019 he also purchased the French club OGC Nice. He relocated to nearby Monaco in September 2020, a move that would, it was described at the time, save him £4bn in tax.

Ratcliffe was born in Failsworth in Manchester, and is a Manchester United supporter, despite taking a Chelsea season ticket after moving to London and owning clubs in Switzerland and France. It’s probably fair to say that Ratcliffe’s time with OGC Nice hasn’t been an unqualified success; just two days after his purchase of the club, they had a Ligue Un match against Marseilles suspended after a homophobic banner was hung from a stand. A resurgence in hooliganism has long been a problem at Nice, as it has elsewhere in France.

On the pitch, any hopes that the change in ownership at Nice would mean greater competition in Ligue Un for PSG have thus far been disappointed. In the three years since he took control of the club, they’ve finished 5th, 9th and 5th, while Lille proved that it is possible to topple PSG from the top by winning the title in 2021, though Lille persuaded head coach Christophe Galtier from Lilthemle afterwards. He has since decamped to PSG. Nice also reached the final of the 2022 Coupe de France, but lost that 1-0 to Nantes.

Nice have had a busy time in the transfer market this summer, taking on Kasper Schmeichel at the end of his 11 years with Leicester City for £1m while tempting Welsh international Aaron Ramsey from Juventus on a free transfer.

Rather more money has been spent elsewhere. Nice have spent £22.5m to sign Mattia Viti and Alexis Beka Beka from Empoli and Lokomotiv Moscow respectively, and they may not even be done yet, with strong rumours that they are making offers for Nicolas Pepe, Emerson Palmieri and Ben Brereton-Diaz from Arsenal, Chelsea and Blackburn Rovers, respectively.

It’s true to say that the amounts of money that Nice are spending are relatively small at the moment, but there’s nothing in such activity to suggest that Ratcliffe is losing interest. Indeed, at the end of April at the time of the Chelsea takeover talk, Ineos issued a statement confirming that Ratcliffe’s interest in Chelsea ‘in no way diminishes our commitment’ to OGC Nice. It will be interesting to see if a further one is issued after the latest news.

Michael Knighton has been continuing to prowl on the sidelines, having asked Ratcliffe to join his ‘consortium’, but Sir Jim Ratcliffe is a fabulously wealthy individual, so why would he want to be involving himself with Knighton, a businessman with at best a chequered history? Well, an interview with YouTube channel Man Utd The Religion does offer some degree of, well, something:

“The reason I’ve been chasing the likes of Jim Ratcliffe is because he does have the resources, he is a Manchester lad originally, he claims to be a Man United fan, and I believe he is.

“If I can smoke Jim Ratcliffe out and bring him to Old Trafford, my job is done. I want the likes of Jim Ratcliffe to join the consortium. There are people that are a lot wealthier than myself. I certainly don’t have the funds to buy Manchester United.”

Of course, what Michael Knighton might want and might get could be two very different things. In 1989, when he ran onto the pitch in a full Manchester United kit, did some keepy-uppies for the cameras and then kicked a ball into the goal at the Stretford End at Old Trafford, the financial backers pulled out and the takeover collapsed, though Knighton did end up on the board of the club until 1992. Perhaps he’s hoping that some of that magic might rub off on him again. It seems considerably more likely that he’ll fade from view again.

What Manchester United might look like should any sale come to pass isn’t easy to predict. Sir Jim Ratcliffe has a very comfortable life in Monaco, but at 69 years old he does remain the chairman, CEO and majority shareholder of Ineo, so in order to buy Manchester United he would either have to hand day-to-day control of Ineos to somebody else, find people to act as his proxies at Old Trafford, or try to juggle both.

With the greatest respect in the world, anybody buying into Manchester United because they want Manchester United to win more trophies will surely already be aware of just how much work this may require. They aren’t a project that anyone can just leave running on autopilot.

But that is getting ahead of ourselves. The biggest obstacle is obviously the Glazer family themselves, as they are under no obligation whatsoever to sell. Indeed, the likely highly inflated cost of purchasing the club from them has long been given as one of the reasons why there isn’t more interesting from outsiders in ousting them.

From a business perspective, Manchester United continues to do very well for them, earning them regular dividends, and with a stock value that doesn’t seem to be adversely impacted by the fact that the team has been a shambles on the pitch for almost a decade while Old Trafford slowly crumbles around it. All of this may come down to one two-headed question: how much does Ratcliffe actually want to buy the club, and how much of a premium might he be prepared to pay to buy it outright?

There’s little to go on for now beyond a comment from an Ineos spokesman saying that, If the club is for sale, Jim is definitely a potential buyer’, presumably in response to a directly asked question, though this isn’t clear from the reporting in The Times, who broke the story.

Whatever exchange took place comes on top of a news report in Bloomberg earlier in the afternoon, which stated that the Glazers have had preliminary discussions about bringing in new investment but the report says that they are not ready to sell the club. The reports claim the club’s value at ‘up to £5bn’, but as ever, the only valuation that really counts is ‘what a buyer is prepared to pay for it and a seller is prepared to accept for it’. The spokesman didn’t, to the surprise of nobody whatsoever, mention Michael Knighton.

It’s clear that Ratcliffe wouldn’t be happy as a minority investor and would see this as a stepping stone to full ownership, but while the Glazers would like inward investment – it takes a lot of noodle partners to cover the costs of missing out on the Champions League five times in the last nine years – if they are not ready to sell, then to persuade them to do so may cost a lot of money. If this potential impasse can be bridged, then Manchester United could plan for the possibility of a different – and potentially considerably brighter – future. If it can’t, United fans could be left waiting until the Glazers are ready, and who knows when that might be?

In the meantime, Sir Jim Ratcliffe, who has spent some time sitting on the sidelines over Manchester United, evidently feels that now could be the right moment to throw his hat into the ring. There may well be competition from elsewhere. They may be unable to reach agreement. But this story offers a glimmer of hope to a fanbase who have been waiting a long time for substantive change within their club. Whatever happens, the ‘publicity shy’ Mr Ratcliffe may soon find that he’s getting considerably more attention than he has received in the past.