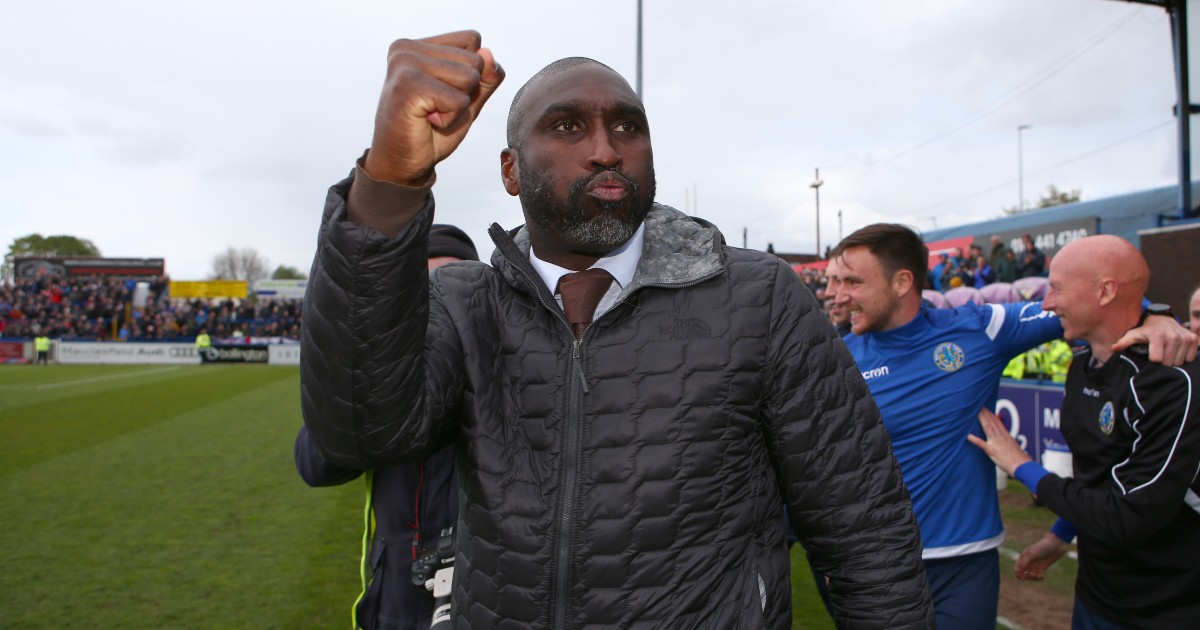 Sol Campbell was doomed with Macclesfield and Southend while his golden generation cohorts were given jobs with the elite. How is that fair?

The curious case of Sol Campbell and his inability to find another job in football management is one of the most divisive and intriguing facets in the sport.

There are many nonsensical claims awash in football which have turned from myth to near fact. One of the most infuriating might just be that instead of complaining about not getting jobs high up the food chain, former Premier League footballers should start at the bottom and work their way up.

It is one of those platitudes that was offered up with no real rhyme or reason and general discourse accepted it as truth. What those who played exclusively at the highest level of the game are supposed to give to clubs they have little to no common ground with is yet to be answered.

There are plenty out there quick to chastise the ease with which Frank Lampard got himself in the Chelsea hot seat, while Ole Gunnar Solskjaer has been a far more successful manager at Manchester United than he ever could have been with Cardiff City.

Steven Gerrard has gone from working in the Liverpool academy to a hugely successful time north of the border with Rangers, every step being on the inevitable path to taking the top job at Anfield in the future.

There are plenty of reasons, some more genuine than others, as to why Sol Campbell was not afforded similar opportunities by former clubs. But he has done what so much of the football world has asked: to pay his dues and prove he is worth a chance at the elite level.

Short yet ultimately positive spells with Macclesfield Town and Southend United showed Campbell was willing to get his hands dirty. That neither club is in the EFL any longer, the former not even a club at all in their previous guise, is an indictment on many individuals to have touched either outfit, but a noteworthy appraisal of Campbell’s willingness to get to grips with a level of football at which he shouldn’t have needed to test himself.

There are legitimate concerns to be thrown at the former England centre-back as to why so many clubs have opted not to become the third of a burgeoning and perhaps ultimately short-lived managerial career. But the fears over his track record are far off the mark. At Arsenal, Newcastle and Tottenham, win percentages are a far truer test of success than they are lower down the leagues, particularly at clubs in financial peril and unable to pay players. A 22.6% win percentage across 53 games as a manager with two separate clubs, suffering relegation with one, only appears catastrophic without context.

But context is everything. Anything other than suffering two relegations with those clubs at that point in their histories has to be viewed as a unqualified success. Given the off-the-field troubles at both Moss Rose and Roots Hall, all points accrued, all wins earned and a relegation staved off only served to delay the inevitable as two great clubs fell to their respective knees after Campbell’s brief stints at the helm.

A good trick to know if somebody is willing to have a serious discussion as to Campbell’s credentials for further opportunities in management or not is dependent on bringing up his win to loss ratio. Saying ‘ratio’ is also a red flag.

But there are genuine criticisms which can be laid at Campbell’s door. Perennially and rather fairly viewed as one of football’s more eccentric characters, this particular writer has a soft spot for anyone who can be unique and their true selves, especially when so squarely in the spotlight.

But if those of us on the outside looking in are fine to cast our opinions either way, it is important to take a good serving of knowledge from those who have worked under the England international, including former Southend striker Simon Cox, a member of the side relegated from League One with the Shrimpers in the curtailed 2019/20 season.

In our new episode, he calls the Arsenal legend the worst manager he’s ever had!

Cox makes multiple fair points as to Campbell’s less-than-ideal approach to management, chief amongst them the do-as-I-say attitude with regards to turning up late for training when players were told tardiness was a ‘non-negotiable’. Fans, both of Southend and otherwise, take great glee in Campbell forgetting the name of the club he was managing, while some of his punditry roles in recent years and beyond have been noted for his inability to sound like somebody with even the most basic knowledge of the game.

Eccentricity is not a legitimate concern. Jose Mourinho is eccentric. Alan Pardew is eccentric. A handful of managers and the majority of the most memorable have been and are eccentric.

Campbell’s weak points are not in being different, but in his misunderstanding of what supporters want. Backing the decision for HMRC to wind-up Macclesfield Town, claiming to be owed £180,000, was never going to stand him in good stead in football circles.

That is not to say he was wrong to want the money. He worked for it on an agreed contract. He is not bad for taking on an offer that was given to him and being p*ssed off when he didn’t get the tangible rewards. Anyone who claims he has earned enough money and should have worked for free are living in a wonderfully conceived but unrealistic world.

Campbell, though, must have known, as with many of the other missteps he has made, that it would not be a look he would wear well. One day, a club will take a chance on him again, and it will be very much deserved.

The case of whether he deserves a third shot at management is neither simple nor clean cut. Over 1,000 words later and I’m none the wiser. There is plenty to admire about this one-of-a-kind icon – and much to chastise, too.

But nobody can argue Sol Campbell hasn’t done more dues than the rest of the England golden generation put together in working from the bottom. That alone is admirable, and worthy of at least one more chance.