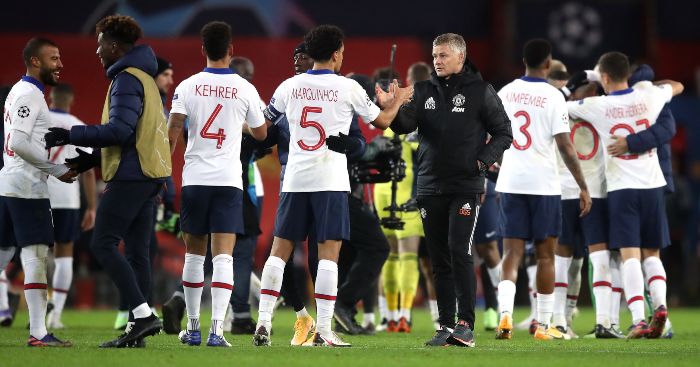 The damage was not done here. There is no shame in losing to the Champions League runners-up, one of few teams assembled at greater expense and frustration. Manchester United’s fate ostensibly remains in their hands, second in Group H with a game left to play.

In isolation, being beaten at home by Paris Saint-Germain is pretty standard fare. It often doesn’t require much of an explanation beyond pointing at Kylian Mbappe and Neymar while shrugging your shoulders. And it’s not as if Ole Gunnar Solskjaer hasn’t been here before; this is the second time he and Thomas Tuchel have swapped wins at each other’s stadiums in as many years.

No, this is precisely the sort of result we have come to expect from this team and this manager. A dreadful start to the season culminated in collapse at Tottenham to make Solskjaer’s position seem untenable. Then they won at Newcastle and PSG to turn yet another corner. A 0-0 draw against Chelsea raised more questions than answers, before Leipzig were thrashed 5-0 and the future was clear. But that allowed “complacency” to creep in against Arsenal and it felt like the end of the road against Istanbul Basaksehir. Four consecutive wins shifted the momentum once more but Neymar stopped them in their tracks at Old Trafford.

This is Solskjaer’s United: trapped in increasingly elaborate vicious circles. There are few better teams at playing under pressure. There might be none worse when playing without it.

It was that result and display in Istanbul last month that led to this. That genuinely ludicrous Demba Ba goal nudged open a door United had slammed shut by beating the two best teams in a difficult group with a couple of excellent performances. Now they need at least a draw in Leipzig to advance; Julian Nagelsmann’s side have won all seven of their home games this season by an aggregate score of 18-4.

Most of this was honestly fine. United started terribly and conceded because they are the only team that could ever set up to counter before conceding on the counter and continuing to be countered. They settled and scored an equaliser that was both deserved and fortunate, Marcus Rashford’s effort matching the run of play for the ascendant hosts but Danilo’s deflection was decisive. They missed some presentable chances with the scores level – good evening, Anthony Martial – but were beaten by better individual quality.

That is the simplistic explanation. Others might point to how the managers tried to affect the game. Tuchel sensed a growing weakness down Neymar’s left flank so he introduced Mitchel Bakker for added protection. At the same time, he substituted Leandro Paredes for Ander Herrera as the former had been on a booking for 27 minutes. Marco Verratti was taken off a little later, 19 minutes after receiving his yellow card. It was obvious but sensible in both instances to withdraw central midfielders whose games were naturally inhibited by the looming prospect of being sent off.

Solskjaer saw Fred get booked for an attempted headbutt in the 23rd minute before escaping a red twice for poor challenges before half-time. He watched the Brazilian walk a disciplinary tightrope straight into the dressing room and out again for the second half, then seemed astonished that he proceeded to fall off straight after PSG took the lead. The only surprise was that Fred lasted until the 70th minute, so determined were the visitors to usher him into their well-laid traps.

To be fair to Ole Gunnar Solskjaer, literally everyone saw that coming.

There was no justification for keeping him on beyond the first half. Had Fred been playing well on a yellow card the risk might have outweighed the potential reward but he was poor enough that it seemed as though all of his fouls came about because he was chasing his own awful first touch. It is not hindsight to suggest he should have been replaced. Paul Pogba and Donny van de Beek were on the bench, ignored until the final 17 and 12 minutes respectively as Solskjaer’s first two changes in a game he had to at least not lose.

The same will be true at the Red Bull Arena next week. United might get the result they need to let them get eliminated in the knock-outs instead of the group stage. They might not. It probably depends on whether or not they beat West Ham and a resurgent David Moyes at the weekend, thus either relieving or putting further pressure on Solskjaer.

United have reached the stage of this relationship where they keep threatening to walk out unless he changes his ways. Solskjaer promises to do better if they just give him another chance. But sooner or later he always slips up again. It doesn’t seem as though either will be brave enough to suggest they simply may not be compatible in the long-term after all.