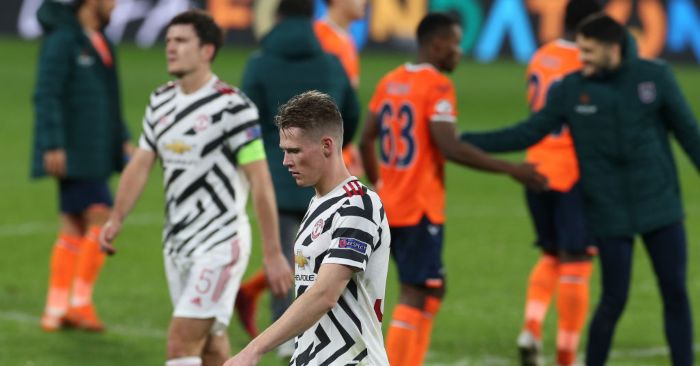 The Manchester United team that started the game was signed for fees totalling £355.8m, not including the three prodigious academy products placed throughout their spine.

The Manchester United substitutes that entered the game comprised their record signing, a “special” teenager, a free transfer on wages as vast as his experience and two further players promoted from the club’s famed youth system.

But what more could the manager be expected to do?

But what does that matter if the manager gets the club?

Manchester United let a 35-year-old Demba Ba run through more than half a pitch of treacle after stationing every one of their outfield players in Istanbul Basaksehir’s half in the 13th minute, with Nemanja Matic the closest man about 20 yards away.

But why defend corners properly in 2020 when the manager scored from one in 1999?

Manchester United have won more than three games in a row twice since Ole Gunnar Solskjaer took over as interim manager in December 2018.

But how can some people not see that someone whose Premier League appointment was sandwiched between that of Ralph Hasenhuttl and Brendan Rodgers, who have both completely transformed their teams and implemented an identifiable style on far stricter budgets with much more difficult foundations, needs more time?

It is on evenings like these that Mauricio Pochettino’s name trends, his decision not to employ an agent justified by the complete and utter aberration of a 90 minutes in which Manchester United had Anthony Martial, Marcus Rashford, Edinson Cavani, Mason Greenwood, Bruno Fernandes, Juan Mata, Donny van de Beek and Paul Pogba on the pitch at various points yet had fewer shots on target than Turkey’s current seventh-best team. Not to mention the defence with composite parts bought for £80m, £45m and £27m that excelled to such an extent that Matic was parachuted back to help at half-time.

The most damning point of this whole affair came soon after. “They really do need him in that midfield,” said Martin Keown on co-commentary as Scott McTominay was introduced.

How has it come to this? The first goal was so laughably baffling that Peter Drury’s trademark line of clippable commentary was replaced with three seconds of silence as he tried to fathom the fallibility. It is genuinely no exaggeration to say there might never have been a goal like it in professional football. The second was not much better, Mata dispossessed deep in his own half and three defenders swarming to try and cover, thus leaving the entire right-hand side vacated.

And therein lies one crucial point: either these actions and such blunt attacking was down to Solskjaer or it wasn’t. It was the result of the players listening to him and carrying out his tactical plans, or it wasn’t. These players are doing precisely what the manager is asking of them, or they are not. It is difficult to say which is true and which is more of an indictment of Manchester United right now, but in either event it reflects terribly on the manager. Either this squad is doing what he wants them to, just badly, or they are not despite him having been in charge for almost two years. He is complicit, whichever the reality.

These players deserve blame. They warrant criticism. They will shoulder the responsibility. They were terrible. But that is besides the point. They always receive the blame, the criticism, the responsibility. They are often terrible but so clearly have the capacity to do more. There is ability there to coach and coax. Yet Roy Keane saves his acerbic takes only for them; Gary Neville reserves his scathing attacks for the players, the recruitment, the hierarchy. Many still line up to pretend that a cultural reset is ongoing, that former standards are being restored, that any and every victory is proof of a grand plan coming together rather than just rigor mortis suggesting signs of life from the corpse of a club being left further and further behind.

Manchester United might still progress from this Champions League group. They could beat Everton on Sunday and embark on a modest unbeaten run before they can walk. They may beat a member of the elite before the year is out.

But that is the sum total of their hopes of progress under Solskjaer: a few steps forward followed soon after by great strides back. An existence in purgatory with the quality in this squad providing a natural floor but an over-promoted manager installing a man-made ceiling. He has had ample transfer windows and time, enough leeway and sufficient opportunities. The excuses are desperate and the experiment is over.