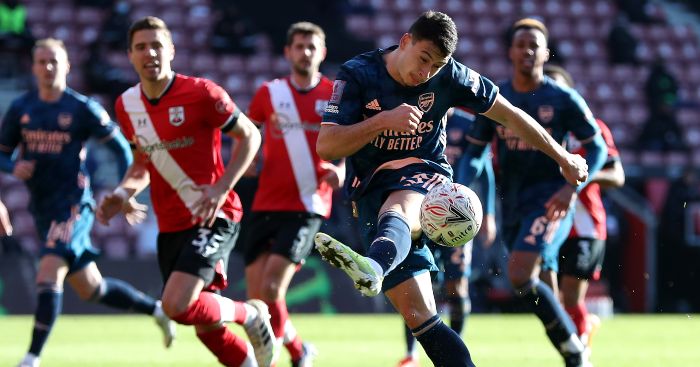 Changes to Mikel Arteta’s starting XI proved costly as defending FA Cup champions Arsenal gave up their crown without a fight on Saturday afternoon, losing 1-0 to Southampton at St Mary’s.

Arteta made a raft of changes to the Gunners line-up who started their comfortable 3-0 win over Newcastle United. There were seven alterations in total as Hector Bellerin and Gabriel Magalhaes came into the back four, while there were also starts for Mohamed Elneny, Nicolas Pepe, Willian, Gabriel Martinelli and Eddie Nketiah. New signing Mat Ryan, who joined on loan from Brighton until the end of the season, was given a place on the bench as Bernd Leno kept the goalkeeper’s jersey for this match.

Southampton were by far the better side in the first half with Arsenal looking disjointed, much to do with their changed team. Danny Ings and Che Adams had really good opportunities to take the lead early on, while Arsenal defender Cedric Soares found himself free in the area part-way through the first half, only to blaze over the bar. The Saints did take a deserved lead on 24 minutes when Kyle Walker-Peters drilled it across the six-yard box with Gabriel deflecting the ball into his own net.

4 – Arsenal have conceded four own goals in all competitions this season – more than any other Premier League side and the most they have conceded in a single campaign since 2015-16 (5). Worry. #SOUARS pic.twitter.com/fnt7ASThFq

Unlike his opposite number, Ralph Hasenhuttl played his strongest XI and it was to pay dividends for the Austrian as they rarely looked in danger of losing. The Gunners were much-improved in the final 20 minutes, though, after they introduced Thomas Partey, Bukayo Saka and Alexandre Lacazette. Their tempo went up a notch, while their style of play was much more fluid, but Fraser Forster saved from Nketiah as they missed their biggest chance to equalise. It was Southampton’s day as they secured their first ever FA Cup victory over Arsenal  – having lost in their previous four attempts – and moved into the fifth round where they will face Wolves.

Heading into the fixture, Hasenhuttl had challenged his Southampton players to do the double over Arsenal with the Saints facing the Gunners again at the same venue in the Premier League on Tuesday. He said: “I’d prefer winning both to be honest, if it’s possible we’ll do it, but I know it’s tough. Yes, we have the chance to I think. On our day we can beat any team in the league, we’ve shown this, especially at home. I think this is the goal we have. Yes, tough like always, but not impossible.”

Of course, Arteta would’ve wanted to win both matches too but the team he put out lived up to expectations, putting in a predictably poor display. The likes of Elneny, Willian, Pepe and Nketiah have had poor seasons and continue to not be good enough, with the line-up leaving many Arsenal fans fearing the worst. Their anxiety has been eased in recent weeks with Arteta’s side bouncing back from a terrible run of form, winning five out of their last six matches in all competitions, before their defeat today. Don’t change a winning team they say but that’s exactly what Arteta did and he got the outcome many would’ve predicted. Southampton, who are just above them in the Premier League, deserved more respect than that. Their pressing high up the pitch was just too much for Arsenal’s second string to contain with Hasenhuttl’s men flooding forward in waves. It was reminiscent of some of Southampton’s better performances this season with the Saints not as free flowing in recent weeks.

1902 – Southampton have eliminated the holders of the #FACup for the first time since beating Spurs in 1901-02. Saints ended up reaching the final that season, losing to Sheffield United. Marching. #SOUARS

Arteta explained ahead of kick-off that some players “deserve a chance” to show what they can do but none of them repaid him. Arsenal are the current holders of the FA Cup and in some ways you can understand Arteta prioritising the Premier League over the cup considering their weak start to the campaign. They have nothing to prove in the FA Cup while they have an opportunity to close the gap on the top six if they win in the league on Tuesday. Whatever his reasoning though, it was a poor display and not one befitting of the holders, with the Gunners handing their title over with barely a whimper.

No doubt the likes of Lacazette, Saka and Partey will come back on Tuesday when Arsenal play Southampton again in the Premier League. It will surely be a much better performance from Arteta’s men and now resembles a must-win fixture. A weakened side losing to Southampton in the FA Cup will be accepted by Arsenal fans but only if they are rewarded with three points in midweek. If not, there will be more questions raised, as FA Cup and European qualification hopes are potentially dashed within days of each other.