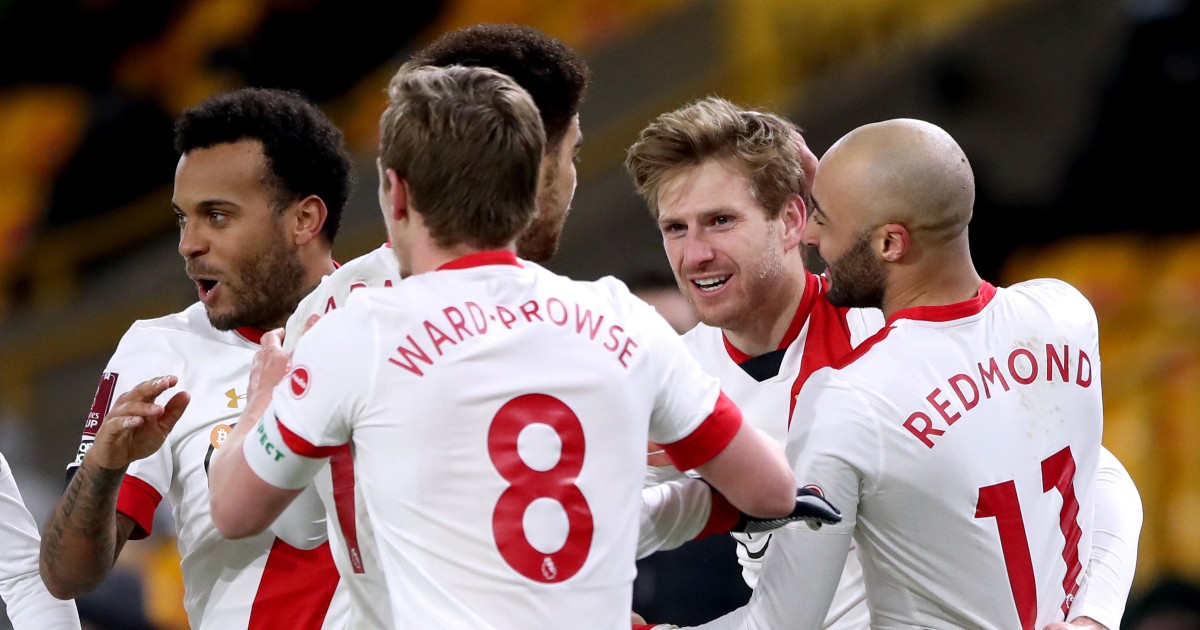 Southampton’s 2-0 defeat to Leicester in January triggered the avalanche of losses that saw Saints plummet spectacularly from the summit of the league. Their recent draw at home to Chelsea temporarily cauterised those wounds, but with back-to-back defeats in their last two outings, the Hampshire outfit are haemorrhaging once again.

Their Jekyll and Hyde campaign has to be one of the more peculiar oddities this freak show of a season has coughed up. The south coasters managed 24 points from their opening 13 fixtures and a mere six points from the next 13. In November they led the Premier League for the first time in their history. Come February, they had set a new club record for consecutive losses (6).

Saints may sit seven points above the drop zone and are in no immediate danger, but teams previously deemed too strong to go down have certainly done so. Middlesbrough were relegated in 1997 despite spending lavishly and reaching the final of both domestic cup competitions. Surely Southampton couldn’t possibly lead the table and get relegated in the same season? Or could they?

Theirs is the joint second worst defensive record in the league, but to an extent you have to discount the 9-0 capitulation at the hands of Manchester United. Overlook that result and their recent average goals conceded per game (1.4) is roughly the same as in the opening third of the campaign. Glance at the form book since the turn of the year and it’s obvious why they are in free-fall: the goals have dried up.

After beginning the season with a healthy average of 1.9 goals per game, Saints have netted a paltry six times in their last 13 matches. If they are to arrest the slide and enjoy a comfortable end to the campaign, their misfiring attackers have to kick back into gear. Can Stuart Armstrong provide the necessary spark?

I’d wager there are plenty of fans who’d welcome a player of the Scot’s calibre into their club. I kept a keen eye on the midfielder’s progress during his prosperous three-and-a-half year spell at Celtic Park. He epitomised Brendan Rodgers’ progressive philosophy, and boy did the Celtic faithful ever love him for it.

When news reached me of his imminent move to the south coast I thought the reported £7m price tag was a snip. As a Newcastle fan I would have snapped the hand off Celtic. After all, Southampton had previously forked out £13m on Virgil van Dijk and if memory serves they got a reasonable return on that investment.

Armstrong endured a patchy transition to life south of the border. The step up in quality aside, I was left largely underwhelmed by his debut season, particularly his end product. His 2019/20 campaign was far more fruitful. Despite his side’s nosedive, a positive coronavirus test in October and a couple of niggling injuries, he seems to have kicked on again.

The Inverness native’s most potent weapon is his ability to drive into space and commit defenders. He may not have the assists or goals that his incisive play warrants, but he is so often an accessory to the opportunity, whether that be by creating space for others, assisting the assist or simply injecting some attacking impetus.

His dribbling stats tell you everything you need to know about the confidence he has in his ball-carrying ability. Despite missing five matches this season he has attempted a total of 65 dribbles, ranking placing 23rd in the league. Forty-one of those dribbles were successful (putting him 16th), and he is placed 25th in most successful dribbles per 90 minutes (2.1). He tops Southampton’s rankings across all of these metrics.

Some really impressive displays from Stuart Armstrong so far this season 👏 pic.twitter.com/eXaVbsqypH

And in case you were wondering, Adama Traoré does indeed lead the way in almost every regard. One-hundred-and-fifty-four total dribbles, with 108 successful and 5.5 per 90 minutes. What a dynamo. Allan Saint-Maximin just about denies him the clean sweep in the dribbling category, with 0.2 more dribbles per 90 minutes.

Merci, don’t leave Tyneside, Allan! I wonder if he even bothered unpacking his suitcase…

Armstrong’s passing game is solid, too. His assist total (3) should be higher, but in a side with a floundering attack, that’s still the third-best in the Southampton squad. He has contributed the second-most key passes per 90 minutes (1.2), just behind James Ward-Prowse (1.5), and made the third-most passes in the final third every 90 mins.

Of course, there is little worth in settin’ ’em up if you don’t have someone who’s knockin’ ’em down.

Danny Ings is nowhere near the 22-goal striker we saw last season, but he might have been. He began the season like a house on fire, hitting five in seven. But a knee injury picked up in November brought an abrupt end to his purple patch and since his return to the side in December he has netted just three times in 14 games.

Che Adams also flattered to deceive at the beginning of the season, but hasn’t really built on his debut campaign. He has scored just once in his last 14 matches, though his goal tally is the same (four), with fewer games played this term. In reality, it’s not just Southampton’s forwards who are at fault; the whole team needs to start chipping-in.

Armstrong has scored three times in his 21 appearances this season and is the fourth-highest contributor of goals and assists8 (0.32 per 90) at Southampton this season. He slaloms his way into shooting positions with some regularity, but a shot accuracy of 17% illuminates the one area of his game that needs the most work. This in no way detracts from the core of his ability, but if he could add the volume of goals he scored in Scotland, he’d be seen as a real force.

Southampton fans probably won’t thank me for highlighting the ability of what they maintain is one of the Premiership League’s best-kept secrets. If Armstrong, who signed a new three-and-a-half-year deal in January, continues in the same vein he will undoubtedly have his suitors. Should the unthinkable come to pass, the vultures would be all over him.

Their fans are right, though. All the evidence indicates that Southampton are a far more effective side with Armstrong on the pitch. The Saints have a points per game average of 1.9 with him and 0.4 without.

The south coasters need to rekindle the Adams-Ings partnership of last season and the Scot is the key man to help them accomplish that. My guess is that they’ll pick up a couple of wins over the next five matches and coast to the end of the season. Probably followed by some deep introspection.