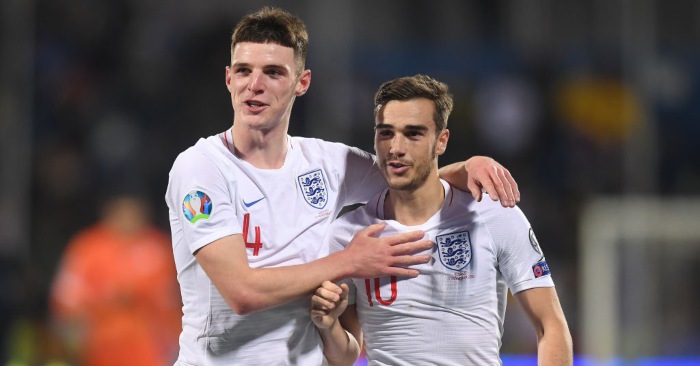 Four months before Euro 2020, England are tipped by some bookmakers as favourites for the tournament. That’s England with the crocked strikers, questionable centre-backs, an even more questionable No. 1 and a midfield three Gareth Southgate is as far away from nailing down as ever. He’s used nine different midfield combinations in the last ten games…

England have four friendlies – two in March and two in June – before they take their tournament bow against familiar foes Croatia on June 14 at Wembley. Four games to remove any indecision – please, for the love of God.

There are two certainties. Firstly, England will play a midfield three. Southgate – to his credit – knows that by far England’s greatest asset is pace on the flanks. That means perming two from three of Marcus Rashford, Raheem Sterling and Jadon Sancho either side of a hopefully fit Harry Kane, and it usually means three central midfielders.

Secondly, Jordan Henderson will start. The Liverpool captain has had another outstanding season, with many (wrongly) touting him for Player of the Year. On current form, in his role on the right side of a midfield three, he’s one of the best midfielders in Europe. And Southgate is just about resisting the ever-growing temptation to drop Henderson deeper – to the position in which he finished the World Cup – to remedy England’s defensive midfield problem.

The England boss has opted for Eric Dier, Declan Rice or Harry Winks as England’s defensive midfielder since the World Cup. Dier is now out of the reckoning – even Jose Mourinho cannot shoehorn him into his Tottenham team – so the question is whether he opts for a Winks or Rice-shaped peg in a round hole both are too square to truly fit.

Winks is not a natural defensive midfielder. He keeps possession, plays dinky little one-twos, occasionally looks for forward passes, and very occasionally breaks into the box. But he’s far from the midfield enforcer England will require against stiff opposition. The thought of Paul Pogba, Blaise Matuidi and N’Golo Kante swarming around him is harrowing.

Fortunately, England have got a big b*****d they can use instead, but unfortunately that’s pretty much all he is – a big b*****d.

With every passing fixture in a West Ham relegation dogfight, Declan Rice looks more and more like a good centre-back doing a very bad impression of a central midfielder. He’s cumbersome, gives the ball away (a lot) and makes rash challenges to make up for those errors. Southgate may feel added pressure to include him, having persuaded him to switch allegiances from Ireland to England but, worryingly, Rice’s form seems to get worse the further removed he is from that initial flirt with the Irish national team. Maybe they’d like him back?

Meanwhile, a battle has been raging for the last six months for a position in England’s team that doesn’t exist. Jack Grealish and James Maddison have been embroiled in a media-created number 10 face-off, despite it being very unlikely that Southgate will rip up his England blueprint to make room for a number ten. Grealish is perhaps the more likely to force his way in. Not because he’s a better footballer – though he is – or because Southgate can no longer ignore the clamour for his inclusion – though he can’t – but because he has that George Best-like ability to carry the ball, a useful asset driving from that slightly deeper position.

Jack Grealish is showing James Maddison how to play football.

But Southgate is far more likely to opt for one of his physically powerful favourites, Alex Oxlade-Chamberlain or Ruben Loftus-Cheek, who is back in training for at least the hundredth time this season, rather than a more mercurial but less athletic No. 10.

And that’s fine. And dropping Henderson deeper is fine as well – if he must. It might eventually be the least worst option. What’s making us uncomfortable is seemingly having no clue what your best midfield looks like in February before a June tournament. Come to think of it, who’s he going to play at centre-back? Oh for fuck’s sake…