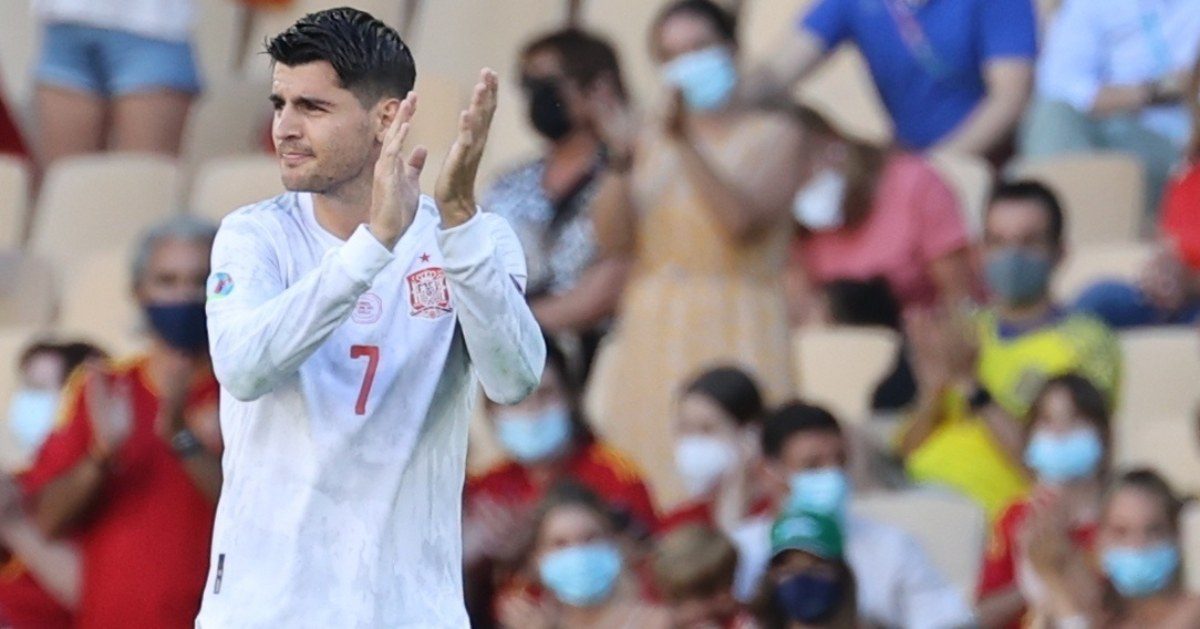 Spain were “like a bottle of cava that is about to be uncorked,” said Luis Enrique prior to last week’s meeting with Slovakia. Two games and 10 goals later, La Roja have finally found their fizz.

Two days after Denmark became the first team to score four goals in consecutive matches at the European Championships, Spain went one better by repeating a five-goal haul to seal a place in the last eight. Their second spree was far harder earned against a Croatia side that, unlike Slovakia, refused to lie down and the spirit they offered to recover repeatedly in Copenhagen will thrill Enrique as much as their sudden improvement in front of goal.

No one epitomised both more than Alvaro Morata. The striker spoke out last week over the abuse he and, shamefully, his family has received in the wake of his profligacy during this tournament, but Morata apparently used the flak as fuel for an outstanding performance in a running battle with Duje Caleta-Car, the highlight being a fabulous fourth goal to finally crack Croatia’s resolve.

There was no lack of confidence evident in Morata’s sublime first touch on his right side and the frustration of recent weeks was unleashed through his left foot with emphatic, unstoppable finish when another big chance arrived in the 100th minute.

5 – Alvaro Morata has scored his fifth goal at the European Championships, becoming Spain's joint-highest scorer in the competition along with Fernando Torres. Thunderbolt. #EURO2020 pic.twitter.com/quYGk3O7eQ

Spain, as a team and a nation, owe Morata a debt of gratitude. Because prior to his goal, they were on the ropes.

Croatia were buoyant in the opening third of extra-time and should have gone in front. Were it not for the resilience of another Spain star, Enrique’s side would have been floored.

Unai Simon came up big to deny Andrej Kramaric four minutes before Morata’s intervention. The stopper dropped to his right to preserve Spain’s parity while redeeming himself for an error that would shame a schoolboy when he allowed Pedri’s backpass to become the tournament’s ninth own-goal.

Simon, though, did not sulk. The Athletic Bilbao keeper highlighted why Enrique prefers him to David De Gea with flawless handling and, even more impressively, the bravery to continue playing out from the back.

Simon had to be solid because his defence showcased their vulnerability in phases of the tournament’s most entertaining game so far. That will be a concern for Enrique, especially if it is Kylian Mbappe and Karim Benzema waiting for them in St Petersburg on Friday.

Enrique started with Eric Garcia alongside Aymeric Laporte but the Barcelona new boy was withdrawn when Croatia began taking a more direct route towards goal. Pau Torres’ introduction did not have the desired effect.

Johnny Nic: Emma Hayes is setting standards on the touchline and in the media

Torres was never comfortable under pressure from Kramaric, Mario Palasic or Mislav Orsic. And his arrival prompted the shifting of Laporte from left to right, where the Manchester City centre-back appeared far less at ease.

Still, Croatia’s defending was worse, especially where their full-backs were concerned. Laporte’s City team-mate Ferran Torres benefitted from one appalling lapse in concentration when Josko Gvardiol was caught having a drink when Spain switched play from deep with a cross-field free-kick. Gvardiol was still favourite to reach the ball first but, inexplicably, he allowed Torres to nip in and score Spain’s third.

That’s eight goals in 15 Spain appearances for Torres. The expectation was that he would start from the bench but Torres, along with Morata and Pablo Sarabia have perhaps now cemented themselves as Enrique’s first-choice front three.

Now they have discovered a cutting edge, Spain now have reason to believe their corks could be popping at Wembley on July 11.