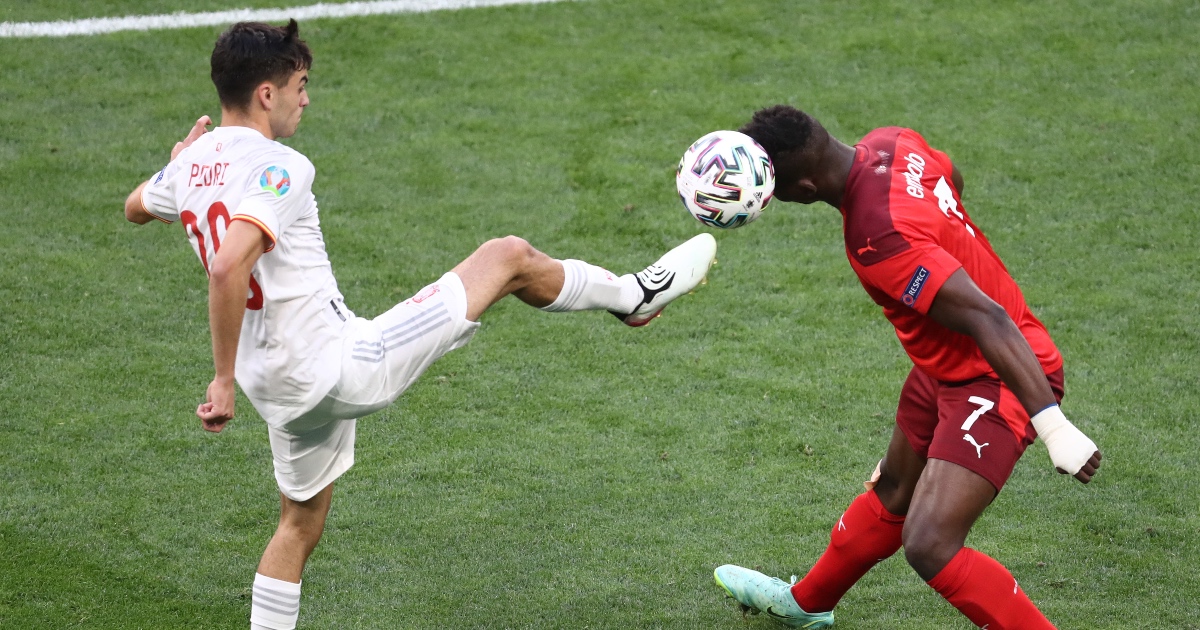 Pedri has always got a picture in mind and with him in midfield, Spain do too.

Spain were the better team but Switzerland didn’t deserve to go out like that. The fight continued from their monumental victory over France and few would have bemoaned another giant killing. Spain’s goal was fortunate and Remo Freuler’s red card, which forced the Swiss backs to the wall for 45 minutes, was in the daft realm which causes staunch opposing opinions on social media – it wasn’t clear-cut. The battle they showed to take the game to penalties would have made them deserving semi-finalists.

But it wasn’t to be. A flawed Spain side are through and have made it so far, in no small part, due to a fabulously talented, incredibly mature 18-year-old.

Before this game, of all the players at Euro 2020, Pedri had the most open play passes leading to a shot (15), the most goal creating actions (5), made the most carries into the final third (22) and had covered the third most ground (46.9km). As Koke said: “He’s the present and future of Spain.”

5 – Pedri is only the second European player in major tournament history (World Cup/EUROs) to start as many as five such matches at the age of 18 or below, after Northern Ireland’s Norman Whiteside, who started five times when aged 17 at the 1982 World Cup. Innate. #EURO2020 pic.twitter.com/nKIvEiDlvJ

The comparisons with Iniesta are inevitable. And their are similarities beyond their shared position to the left and in front of Sergio Busquets: the impeccable first touch; the use of the body to shield the ball; the slightly languid dribbling style; the sweeping passing motion; the calming persona. But it’s an assumed trait that sets them and the very best midfielders apart from the rest.

It’s colloquially known as ‘the picture’ – this ability to know your options on the ball before you receive it. It requires ‘scanning’ – the little head movements where a player looks briefly away from the ball to gather and process information to then move it at speed when it comes to them. Frank Lampard was a notable example of a player with his head on a swivel.

The other skills, like the first touch and the passing range, allow the likes of Kevin De Bruyne to make the most of the picture. But they also benefit from the experience of playing with specific teammates. It’s not just about where they are when you get the ball, but also where they are going to be in relation to the opposition a split second later.

This makes Pedri’s role for Spain – the link between Busquets and their profligate forwards – particularly impressive. The relationship with Busquets and Jordi Alba should be, and is, well ingrained – they all play for Barcelona. But Pedri made his first start for the national side at the end of March; this is just his ninth cap. It’s remarkable that he’s so aware of his teammates movement. This pass sums it up.

He points to where he wants the ball in front of Denis Zakaria, and as it’s on his way to him, Pedri glances to the left, sees the movement of another Swiss player towards the ball and the space he’s vacating. Instead of the easy pass to Busquets, he plays the difficult one to Koke and takes out the entirety of the Swiss midfield in the process. Any player at Euro 2020 could have played the pass, but so few would have thought to play it. His ‘football brain’ is functioning at a far higher level than the vast majority.

He was taken off two minutes before the penalty shootout in this, his 61st game of the season. He’s been on the pitch at Euro 2020 for all but those two minutes. Luis Enrique is well aware that Pedri is indeed the present for Spain – he’s arguably their most important player. But while the present remains a bit of a muddle, with the faults in this Spain side at least as plain as the plus points, the future is far more secure than it seemed at the start of the tournament. They, like Pedri, have a picture in mind, with the 18-year-old at the very heart of it.