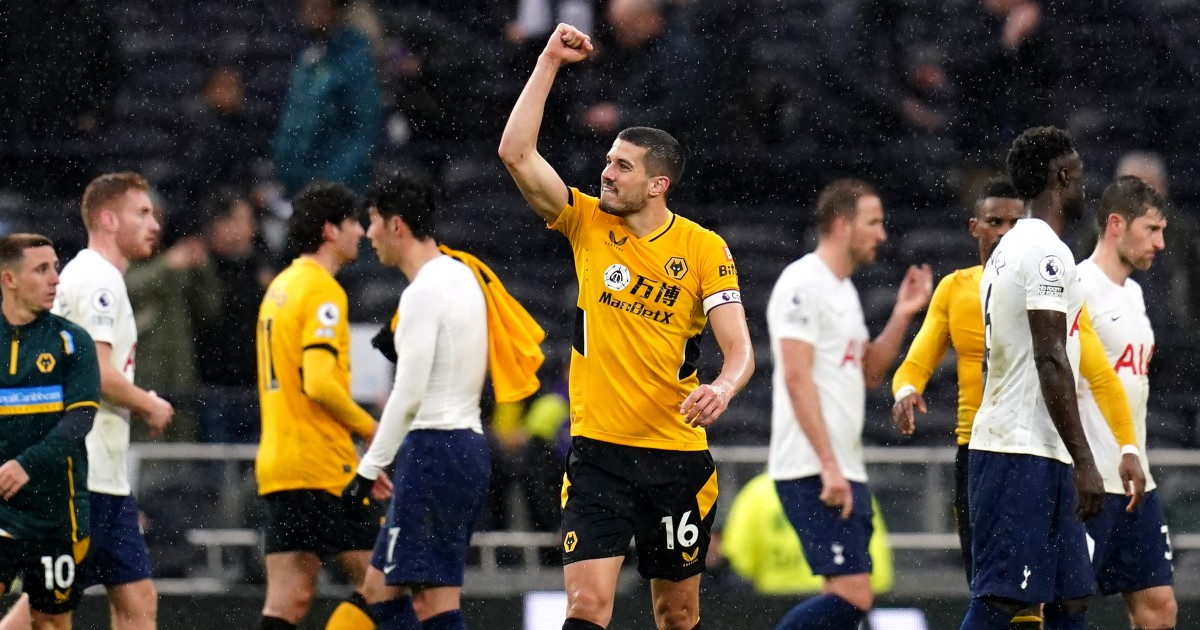 Wolves earned their right to celebrate a victory over crisis-stricken Spurs which reshaped the Champions League qualification race once more.

Raul Jimenez spun away, broke into a casual jog and collected his teammates like dust on a neglected surface before leaping and punching the air. Leander Dendoncker beat the club badge on his chest and similarly tested his own aerial agility as gleeful players flocked around him to bask in the joyous glory. Wolves took 18 minutes to do twice to Spurs what they could not manage once against Arsenal; strangely enough, they did not simply pick the ball up and walk solemnly back to the centre circle either time.

The celebration police broke their own laws in north London as they helped reshape a constantly shifting Champions League qualification race. Whether tripping over shoelaces, aiming firearms at their own feet, checking the dental health of gift horses or following any other idiom defined by general inopportune incompetence, none of West Ham, Manchester United, Arsenal or Spurs seem particularly interested in carrying the baton for any prolonged period.

Perhaps Wolves can oblige. They are now three points off fourth with a game in hand on two of the three teams directly above them. Leaving that bitter Arsenal setback aside, they have won five of their last six Premier League matches, the exception being a draw against the world and European champions.

With the second-best defence in the entire division, Wolves absolutely have a chance.

One issue they might encounter for the rest of the season is that their two meetings with Spurs have been expended. So long ago was their first that Dele Alli scored the winner for Nuno Espirito Santo’s side in August. While Spurs have transformed since then – neither for better nor worse, really – Wolves have remained much the same. Their performance levels rarely waver. Bruno Lage has installed a remarkably high floor and there is no suggestion that they are close to their collective ceiling yet.

Bruno Lage doing an excellent job @Wolves. Quietly made subtle changes to Nuno’s system and personnel and made them more effective.

The club is in a similar state to its best years under Nuno: defensively resolute with a tremendous midfield and latent attacking threat that often needs coaxing out. Only this version of Wolves is more ambitious, more progressive, more confident, more effective.

Spurs shirked in the face of that challenge. Hugo Lloris crumbled as captain, first fumbling loose balls to Wolves players until Jimenez finally obliged with the opening goal, then throwing a live grenade in the general vicinity of Ben Davies moments before the second.

Not that the Welshman was without fault, kicking it down the line to one of those swarming Wolves players instead of towards safety. Dendoncker’s subsequent tap-in after a doubly deflected shot rebounded off the post was the explosion that left the hosts reeling.

Every other pass went awry. Wolves sensed an innate fear creeping in. That tangible chaos never really dissipated: Davies, Matt Doherty, Davinson Sanchez and Harry Winks all surrendered possession and launched counter-attacks from which Wolves really ought to have extended their lead thereafter. Antonio Conte dragged Ryan Sessegnon off before the half-hour mark and Dejan Kulusevski was applied as the plaster over myriad gaping wounds.

There was a vague improvement in the second half, although that comes with two caveats: 30 seconds after the restart, Cristian Romero failed to make a basic square pass to Davies and instead conceded a throw-in; and the game state also dictated that Spurs would be given more of the ball anyway. Wolves sat back and enjoyed the fruits of their early labour, Max Kilman and Conor Coady leading the defensive stand. Chances came and went for Harry Kane, Heung-min Son and Kulusevski. On the odd occasion the visitors were truly breached, the fantastic Jose Sa stood firm.

Lage even felt comfortable enough to afford teenager Luke Cundle a first Premier League start, the midfielder misplacing one pass in his 86 minutes. It provided quite the juxtaposition with the sacrifice of Sessegnon. Wolves should not feel emboldened to blood a novice in these games, not least to such great effect; Spurs substituting their youngest and most inexperienced player after 28 minutes when the elder statesmen are the ones shirking responsibility most often is a striking message, particularly as Sessegnon almost released Son in behind moments earlier.

It is the first time Conte has lost three consecutive league games since November 2009. Spurs have conceded at least two goals in each of those fixtures, as well as the preceding victory over Leicester which promised a metamorphosis but seems to have been the apex from which this rollercoaster is plummeting. A trip to Manchester City awaits next.

As for Wolves, there is cause for celebration.