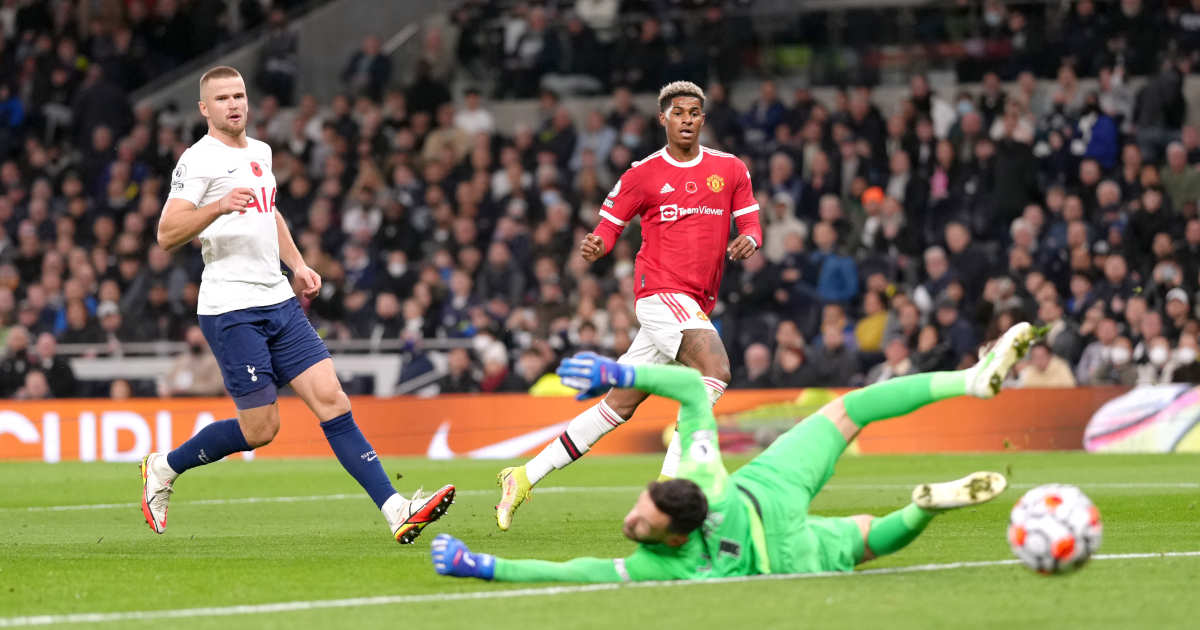 Spurs were the perfect opposition for a wounded Manchester United, which doesn’t reflect well on the way the club’s being run at the moment.

The boos that rang out around The Tottenham Hotspur Stadium at the end of Spurs 3-0 home capitulation to Manchester United were cacophonous, and they weren’t even the first of the afternoon. Spurs had been booed from the pitch at half-time, by which time they were already trailing and as insipid as they’ve looked all season. They rang out again nine minutes into the second half as well, when the decision was taken to replace Lucas Moura, who had at least been showing a little compunction towards making an effort, with Stephen Bergwijn, who scored on his debut for the club against Manchester City in January 2020 but has only scored a further three goals in the other 58 games that he’s played for the club since.

While the attention of the media had spent the previous few days focussing on the shortcomings of Ole Gunnar Solskjaer, Spurs supporters had been quietly preparing themselves for this bombardment. No matter how poor Manchester United may have been in recent weeks, Spurs have been little better. They’ve now conceded three goals in four of their ten league matches, three of those coming against other members of the supposed ‘Big Six’. The defence is porous. The attack is lethargic and unimaginative. The midfield, which is theoretically supposed to link these two, is effectively non-existent. Against West Ham United in their previous match, they’d failed to register a shot on target for an entire half of a match. That record now reads as a game and a half. They were the perfect team for an embattled Manchester United to be playing, at this point in time.

122 days into his time as the manager of the club, Nuno Espirito Santo is already hanging by a thread. The phrase ‘out of his depth’ is thrown around pretty casually these days, but Santo is showing so little of what supporters might ever want to see that it’s difficult to avoid the conclusion that this has been a very bad apppointment for Spurs. It might be considered that this is a reflection on the fact that Santo was so far from being the club’s first choice to replace Jose Mourinho during the summer that he barely even registered in the conversation, to start with. But the 72 days that it took to appoint him tells a story of its own about a football club that is starting to feel like little more than an extension of a light entertainment empire which, as has sporadically been seen in the past, doesn’t seem to place a great deal of importance on actually winning football matches.

It would suit a number of people within the club if the ire of supporters continues to be focussed upon Santo, but there’s plenty of blame to go around and plenty of people upon whom it can be pinned. Cries of ‘We want Levy out’ rang audibly around the stadium, recognition of the dysfunctional relationship between the owners of the club and a fan base which has been starved of success for decades, while criticism of the apathy of the players is starting to zero in on Harry Kane, who’s managed just one Premier League goal in nine appearances this season. For all the criticisms of Manchester City for not having replaced Sergio Aguero during the summer, Pep Guardiola must now be breathing a sigh of relief at not having spent a vast amount of money on a forward who’s playing as though he’s not very interested in playing football any more.

There probably hasn’t been a greater sqaundering of potential that that seen at Spurs since they finished as runners-up in the Premier League in 2017. Since then, the new stadium has been completed, but all the praise heaped upon The Tottenham Hotspur Stadium counts for nothing when the team that calls it home plays as badly as it has done for much of this season. Since 2017, the club denied Mauricio Pochettino the rebuild that the team needed and then, when results inevitably started to tail off, sacked him. They replaced him with Jose Mourinho, who broadly sucked any remaining joy out of the club, and when the finally got rid of him, they did so at about the only time when it seemed like a bad idea to; five days before a cup final. Then came the 72 days to secure a new manager, any new manager, which ended up with Santo.

The most obvious deflection that the club can make right now is to replace an increasingly hapless-looking manager, but the rot at Spurs likely runs deeper than any individual can solve. There has been speculation that they may now be moving to replace him with Antonio Conte, but this is unconfirmed at the time of writing, and Conte turned down the Spurs job during the summer because of a failure to agree over the sort of backing that he’d get to refresh the playing squad. Spurs fans would likely be delighted to see Santo’s experiment end and Conte sweep in, but the suspicion would remain in the back of the head that the club would continue to be fighting an uphill battle while Daniel Levy remains running the show, and while senior players continue to look so uninspiring and even the fans themselves seem increasingly disconnected from the club.

It would be premature to call this season a ‘write-off’ already, for Spurs. They’re in the quarter-finals of the Carabao Cup, the FA Cup hasn’t even started for them yet, and while they are currently in third place in their Europa Conference League group at the halfway stage in that, two of their remaining three games are at home and their chances of qualifying from this group remain okay. It’s not sparkling, and a return to the Champions League feels light years away even though they’re still only two points off fourth place,

Spurs remain in dire need of the rebuild that they’ve needed for the last three or four years, and while a new manager may be part of that, it probably isn’t the entirety of what the club needs right now. The constant churn of modern football makes this difficult to start with, and the owners of the club have seemed reticent to engage with any form of long-term planning beyond building a huge, shiny, cash-generating stadium. Perhaps the biggest problem at Spurs at the moment is that Daniel Levy seems to regard this stadium as a means to an end in itself, while the fans are wondering what the point of building such a gleaming citadel is, when the team plays the way it so often has this season.