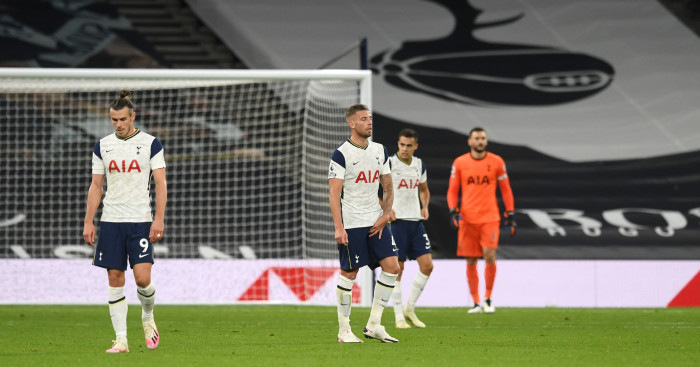 As the 2020/21 Premier League season continues its ever-dizzier joyride towards total bantergeddon, it’s worth remembering that Spurs have been producing this precise brand of nonsense for years.

You want 9-1 wins, or losing 5-3 from 3-0 up, or drawing 4-4 from 4-2 down with a minute to go? Spurs are the team you’re after. And that’s against other teams that aren’t West Ham. Spurs have very often saved their very silliest Premier League football for West Ham, and West Ham theirs for Spurs. It’s Paul Stalteri’s birthday today, by the way.

So given the nonsense of a season that’s unfolding all around us, this was a match that always promised much. You always felt that when Spurs finally had their moment as City and United and Liverpool have had theirs, they would a) do so in grand style and b) in all likelihood do it against West Ham.

Even so, this was all a bit much. Bringing Gareth Bale on at 3-0, just as the Virgil van Dijk news opened up the most open season in memory further still, promptly conceding two almost sarcastically soft goals to individual defensive errors, Bale then missing a glorious chance to settle the match at 3-2 after a superb mazy run before inadvertently teeing up the last-second equaliser and setting The Bale Curse Mk II on its way is just too much narrative. It was the very essence of Spursy. If you can even conceive of such a thing, this was too much Spursiness.

It’s like, how much more Spursy could this be and the answer is none. None… more Spursy. If anything, Clive, they’ve almost bantered that too well.

And it wasn’t even that hard to foresee. I’ll not sit here and kid on that I was watching that expecting quite such peak, distilled Spurs and for West Ham to score three unanswered goals in a madcap 10 minutes, but Jose Mourinho’s side had switched firmly into the coasting mode that had already cost them against Newcastle – which it now turns out was a mere dress rehearsal for what this merry band of bantermeisters had planned – and ignored countless warning shots from an invigorated and encouraged opponent. Long before the goals started, Pablo Fornals had headed inexplicably over the bar from no more than a yard with the goal at his mercy which, quaint as it now seems, actually for a while looked like being the daftest thing to happen in this game.

And long before that, even as Spurs were racing into their freewheeling early 3-0 lead, Davinson Sanchez was dropping as many ricks at one end as Harry Kane was creating chances at the other.

It’s not even like Spurs haven’t been warned in this fixture before. Twice in the last three seasons Spurs have eased into 3-0 leads against West Ham yet ended up clinging on grimly for unnecessarily traumatic 3-2 wins. One of those was even in Jose Mourinho’s very first game, which was simultaneously about 400 years ago yet also in this timeline somehow only 11 months.

All the foreshadowing was there, if you knew where to look.

West Ham, to their immense credit, never gave up in the face of that nightmarish first 16 minutes. Even as they were being overrun by the relentless excellence of Kane and Son Heung-min they never believed they were out of the game, and they never were. They may not have got the first-half goal back that in a sane world you’d think they would have needed, but they had at least established a foothold by the break. And the goals when they came, however Spurs-assisted they may have been, also had quality. The first was expertly delivered and craftily finished. The second a fine move that exploited the obvious vulnerability Sanchez had shown all afternoon. And the third was a dipping, swerving, once-in-a-lifetime nonsense of a strike.

Yet arguably the single stupidest thing about everything that just happened here today is this: Spurs probably aren’t still quite entirely out of the picture. It’s ridiculous – and entirely their own fault – that they only have eight points from these first five games. Those four points spaffed so hilariously and unnecessarily in consecutive home games is probably just a decadence too far even in this season.

As an attacking side they might now genuinely have the highest ceiling in the league, higher even than City or Liverpool. Higher even than Everton. If they do get on a run, the destructive attacking could yet counteract the self-destructive defending. It really could, especially in a season when everyone else is determined to be a little bit Spursy.

The numbers Kane and Son are currently producing are almost unparalleled. They have already combined directly for eight goals this season, two of those in the first ten minutes here. For context, the all-time Premier League record for goal combinations is 36 between Frank Lampard and Didier Drogba; Kane and Son have close to a quarter of that in just their last five games.

It says something for the sheer ludicrous drama of the final ten minutes that it was able to overshadow Kane’s first-half performance, because it was one of the best 45 minutes the Premier League has ever seen. It began in the very first minute with an outrageous pass to set Son on his way for the opener, followed by a double-nutmeg 20-yard strike – Kane is so, so good from that range – and a classic striker’s header before ending in the very last with a goal-saving block inside his own penalty area.

Kane actually had more touches in his own area than West Ham’s during a first half in which he also played a direct hand in three goals. He played as a box-to-box centre-forward. And perhaps the real genius of that performance was that last moment, the heroic dash to get his spluttering centre-halves out of trouble and prevent West Ham clawing a goal back. He may have been overtaken by the events of the second half, but he still managed to foreshadow them.