Home F365 Features League One play-off: Sunderland make it look easy after years of having made it look so hard 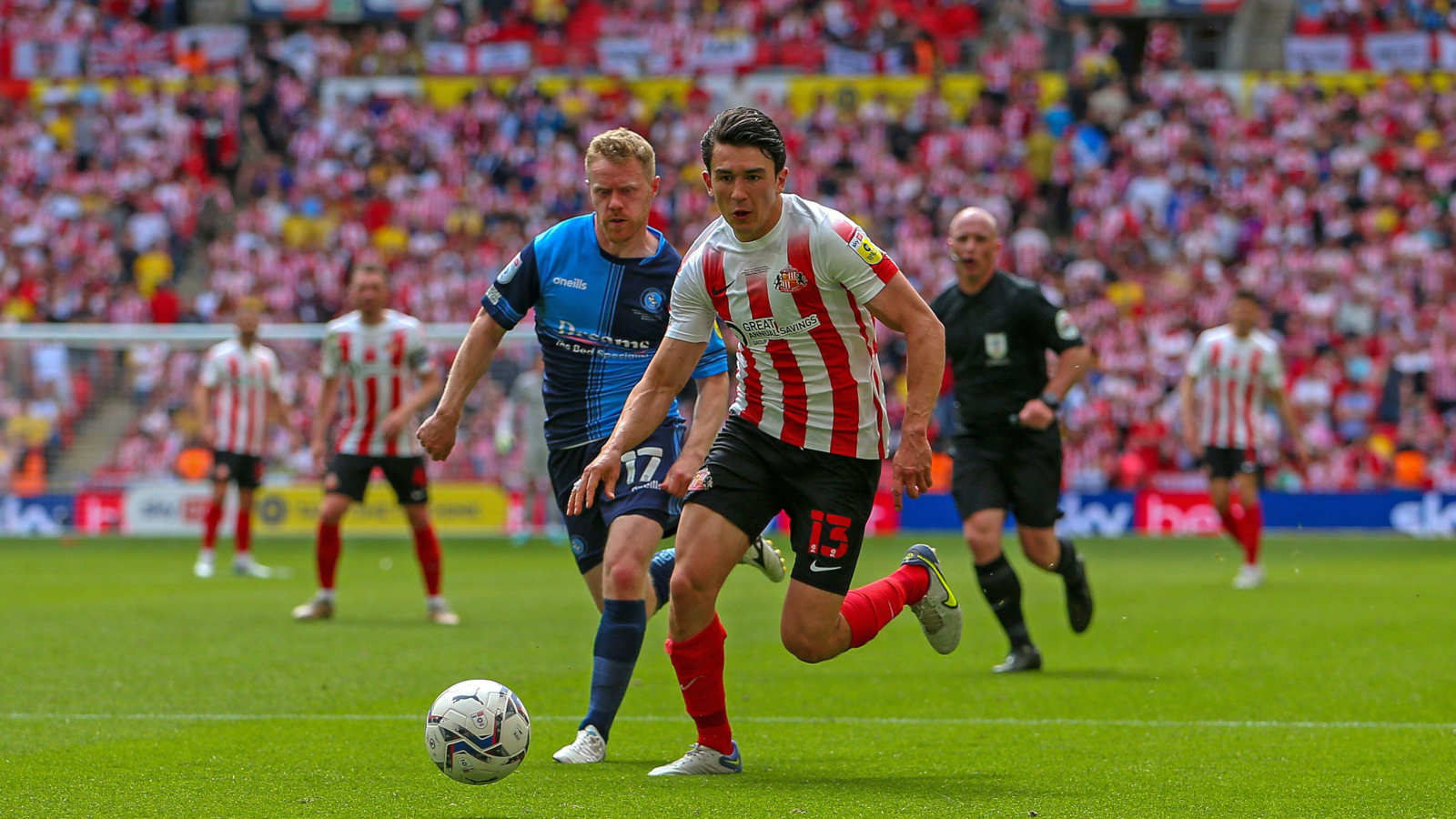 Sunderland are on their way back to the Championship after overcoming Wycombe Wanderers as well as the burden of both their size and history.

As simple as that, it was done. As Ross Stewart cut inside and fired his low shot past David Stockdale to put Sunderland 2-0 up with 12 minutes to play in their League One play-off final against Wycombe Wanderers, you could only wonder why they couldn’t simply play football with such simple elegance more often and spare their long-suffering supporters a considerable amount of angst.

May had been a month of nervous energy for Sunderland, all culminating in another trip to London. They’ve been here before, of course, and more than most. This was their seventh appearance in the play-offs since their introduction; in the previous six, they’d been relegated once and promoted once, with that promotion in 1990 only coming after the team who’d beaten them, Swindon Town, were kicked out of the competition over financial shenanigans.

That sense of yearning for something better after a more than a decade during which their team has been relegated twice and pushed to the financial brink oozes from the club’s every pore. Almost 44,000 tickets were put on sale for this match. They were all sold in a matter of days. When Wycombe couldn’t sell their allocation in full, a further 2,500 tickets were made available and devoured in no time at all. On the Friday before the match, fans started to congregate in Trafalgar Square. Thousands of them, a sea of red and white, seeking safety (and potentially solace) in numbers, that familiar feeling of dread counter-balanced by the near-infinite capacity that the football fan has for hope. This time, surely, it would be different.

And this time it was.

The ticket situation summed up the difference in the sheer scale of these two clubs. Sunderland joined the Football League in 1890, and were not relegated from the top flight until 1958. During those early years, William McGregor, the founder of the Football League, nicknamed them ‘The Team of All Talents’. Their big spending in the post-war years earned them another one, ‘The Bank of England Club’, and whilst they have been as far from either of those descriptions as it’s possible to be over the last decade, that feeling of grandiosity remains. Sunderland are a big club with big expectations, and that comes with a burden and a weight of history that has felt overbearing at times.

By contrast, Wycombe Wanderers remain, at heart, a non-league club who found their way into the Football League. While Sunderland have won the FA Cup twice, Wycombe have won its non-league equivalent, the FA Trophy, the same number of times. In the season that Sunderland won their last major trophy, the 1973 FA Cup, Wycombe were knocked out in the third qualifying round of the competition by Walton & Hersham.

Wycombe’s relegation from the Championship after one season may have been met with unhappiness over the way in which Derby County survived, but it wasn’t met with the existential crisis with which Sunderland dropped to this level four years ago. Even in the tunnel before the match, the contrast was clear. Alex Neil in company tie and jacket, Gareth Ainsworth dressed, as ever, as if he’s going speed-dating and doesn’t want his potential dates to think he takes himself too seriously.

Sunderland scored early, a goal with a hint of the supernatural about it. Elliot Embleton’s 25-yard shot wasn’t a particularly well-hit shot, but even though it moved in the air, from that distance it was surprising to see the Wycombe goalkeeper David Stockdale react as late as he did, stuck in a statue pose as the ball bounced in off his upper arm. Wycombe fell back as Sunderland swarmed forward in and around them. But for all that Sunderland were the better team throughout the first half, that faint air of panic remained when they were pushed. They led by the break, but it felt as though they’d been hanging on towards the end.

Sunderland have rationed their play-off disappointments over the last 35 years to such an extent that there is no age-grouping of their support that is immune to that peculiar feeling of dread that comes when you feel as though a match could slip away from you, like being punched in the stomach and poked in the eye at the same time. At half-time, the Guardian’s Jonathan Wilson tweeted: ‘Eighth time I’ve seen us take the lead at Wembley. Wins to date: one.’ Sunderland supporters knew fully well going into the half-time break, that a one-goal lead is far from always enough to secure a win.

By the middle of the second half, the air starting to crackle with nerves. Loose balls, stray passes and clearances fired vertically into the air became the order of the day, as tiredness and muscle memory came to supercede detailed tactical plans. In the stands, every decision was greeted with a piercing noise, not so much of anger, or frustration, more an outlet, much in the same way that a kettle whistles when it’s coming to the boil.

In an appropriately maverick move Gareth Ainsworth introduced Adebayo Akinfenwa, the 40-year old Oxford English Dictionary definition of the word ‘unit’, with 15 minutes to play. But while his appearance briefly lifted Wycombe’s supporters, they were soon  silenced by Stewart’s decisive intervention, which brought a collective primal scream around Wembley that fell somewhere between joy and disbelief. Wycombe tried to push in the last ten minutes, but Sunderland coped reasonably comfortably and, as so often happens in these situations, looked threatening as they broke into the gaps that inevitably appeared behind the opposing defence. The better team, there could be little question, had won.

Sunderland’s position isn’t perfect. The last set of accounts weren’t great and the ownership situation isn’t either, while there may be those of the opinion that the club will not have been fully revived until they’re back in the Premier League again. But while all of these things may be true, they’re for another day. This is a step in the right direction, a moment in the sun after more than a decade under a cloud. When the ball hit the net for that second goal and Sunderland supporters finally allowed themselves to believe that this time things would be different, the angst washed away as quickly as that. One of the greatest appeals of football is that it can be such a simple game. Trafalgar Square will be rocking.