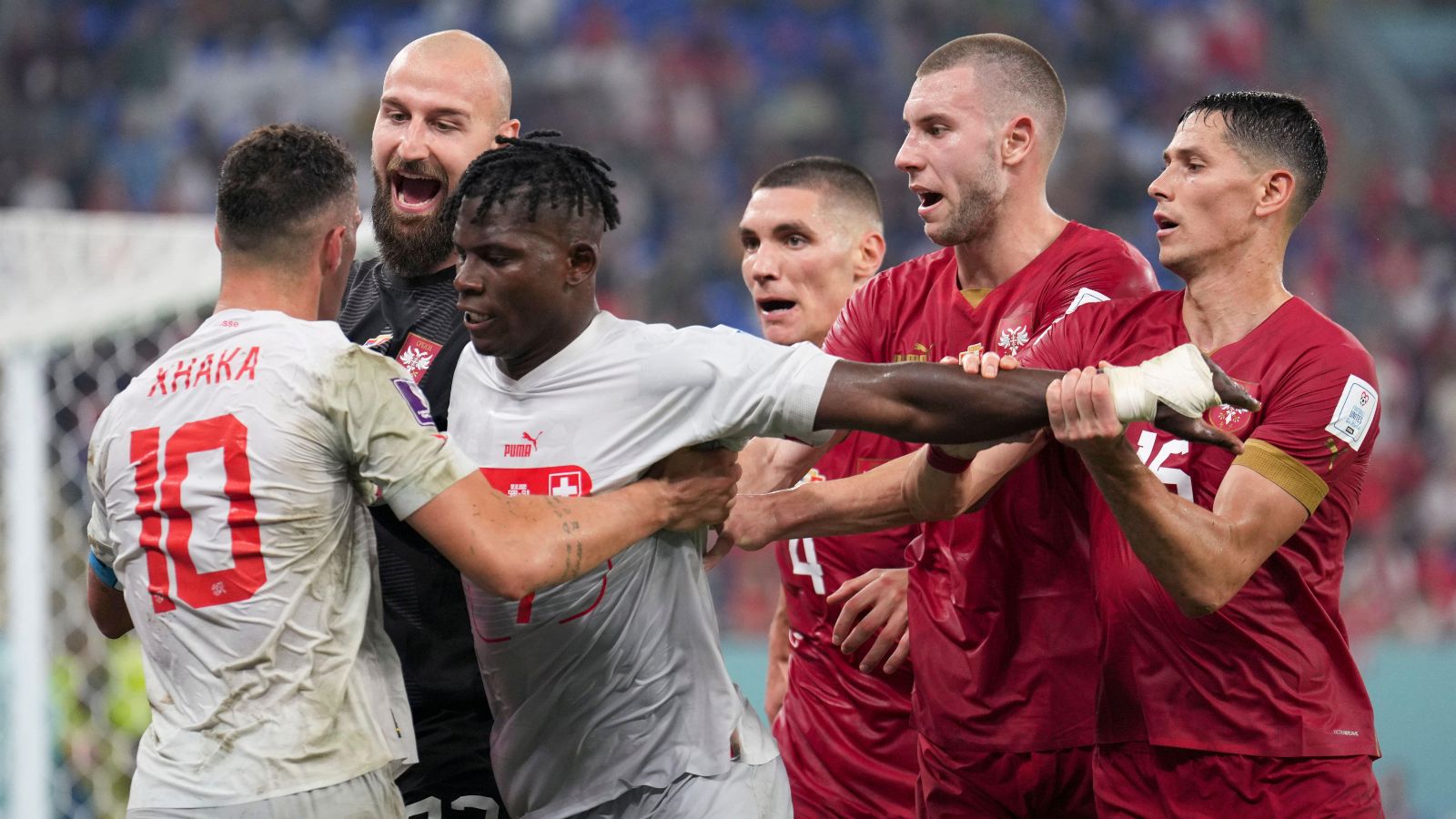 Granit Xhaka has a new party trick and it really is pretty effective. Switzerland are through the knockouts over Serbia and Mark Clattenburg would be proud.

This World Cup has already witnessed some remarkable moments but no accomplishment can match that of Fernando Rapallini. He achieved the impossible. He navigated the tightrope. He doused fires, kept the narrative in check and allowed this pressure cooker to simmer and steam without ever boiling over.

There were 11 yellow cards, including one for unused Serbia substitute Predrag Rajkovic, who will head home from Qatar with more bookings than minutes. Six of those cautions were handed out from the 80th minute onwards and well into around 10 minutes of tetchy, irascible, high-stakes stoppage-time. The lead traded hands three times through five different scorers and only once did one of the benches spill out onto the pitch.

Switzerland’s victory over Serbia was a phenomenal way to round off a spectacular World Cup group stage.

A few hours before the final round of games before the knockouts were played, the televised picks for the FA Cup third round were announced. Half of the six ties are all-Premier League, with Sheffield Wednesday, Cardiff and Oxford facing top-flight sides in the other games.

Perhaps it should have been no surprise that ITV chose to hand the platform of their main channel to Cameroon’s match against a much-changed Brazil.

Those who tuned in to the more meaningless and far less charged game in Group G were eventually treated to a surprise win and red card-inducing celebration from Vincent Aboubakar, who packed an incredible degree of cult vibes into his two goals at the finals. Never before has a player been so willingly sent off by such an apologetic official.

The Cameroon victory also meant that England were the best performers in a World Cup group stage for the first time in history, which is more than enough to make you wonder what they could achieve if Gareth Southgate was either sacked mid-tournament or decided to release the handbrake.

But stowed away on one of the supplementary channels, Serbia and Switzerland played out a thrilling rollercoaster of a game which swung qualification back and forth against a heated political and historic backdrop.

Switzerland started the evening in control of the situation and were eager to prove as such, becoming the first team on record to have three or more shots in the first minute of a World Cup game.

Serbia soon settled and Andrija Zivkovic cut inside from the right to rattle a thunderous effort against the post, much to the presumed approval of Andros Townsend on co-commentary.

Then came the goals: four shared equally in 24 minutes before half-time, the first occasion since England versus Argentina at World Cup ’98 that two teams have scored more than once each in the first half of a match at the finals.

Xherdan Shaqiri’s effort was deflected in and celebrated ordinarily, much to the relief of the watchful Rapallini. Aleksandar Mitrovic equalised with a stunning glancing header and Dusan Vlahovic’s excellent temporarily put Serbia through. Breel Embolo’s well-worked goal pegged them back, however, and they never truly recovered.

Dusan Vlahović reaction after scoring… and after so many fake rumours about his private life. 🇷🇸 #Qatar2022 pic.twitter.com/N2od2me4vT

Soon after the restart came one of the team goals of the tournament. Embolo held the ball up impeccably and played it back to the Powercube Shaqiri, whose clipped cross was flicked back by the heel of Ruben Vargas for Remo Freuler to convert. It was a glorious move.

Serbia could only conjure five shots after that. Having earned their way back into the match to lead once, their resources were drained. Their chances came in flashes. Vlahovic was taken off in the 55th minute and Sergej Milinkovic-Savic, Dusan Tadic and Zivkovic were all substituted before the end as Dragan Stojkovic threw everything at the wall, only for none of it to truly stick.

There was something of a moment when Mitrovic worked an opening before collapsing to the ground in the penalty area under mild pressure from Fabian Schar, but Rapallini was unmoved.

The same could not be said of the Serbia bench, who were already furiously protesting the decision before Keeper of the Peace Granit Xhaka decided to grab his last-ditch tackle in their direction.

“There’s nothing in the history behind these two games,” Xhaka said in the build-up. “We are Switzerland, they are Serbia and that’s it. We’re here to play football, as are they.”

Xhaka did plenty of that; he was voted man of the match for a performance of remarkable level-headedness and influence. He barely put a foot wrong in possession and helped steer Switzerland through with his experience.

But this ability he has developed, to pour petrol over a potentially explosive situation, light a match and walk away relatively unscathed, is both extraordinarily useful and entirely against everything we assumed to know about his character. It is not maturity; far from it. Quite fittingly, considering the story about his elder sibling and the house keys, it is very much Younger Brother Energy: instigating a fight but getting away with it every time, despite everyone knowing you were the one responsible.

That riled Serbia up more than anything and it is a growing trend with Arsenal. Rajkovic picked up his yellow card in that fracas and Xhaka was finally booked in the fourth minute of stoppage-time – but not without taking Nikola Milenkovic with him after about six opposition players confronted the lone Swiss captain.

It played into his and their hands perfectly as Serbia wasted time and energy fighting not only a losing battle, but the wrong one. They distracted themselves into elimination, Rapallini would have done Mark Clattenburg proud and, as is customary, Switzerland have reached the last-16 of a major international tournament.