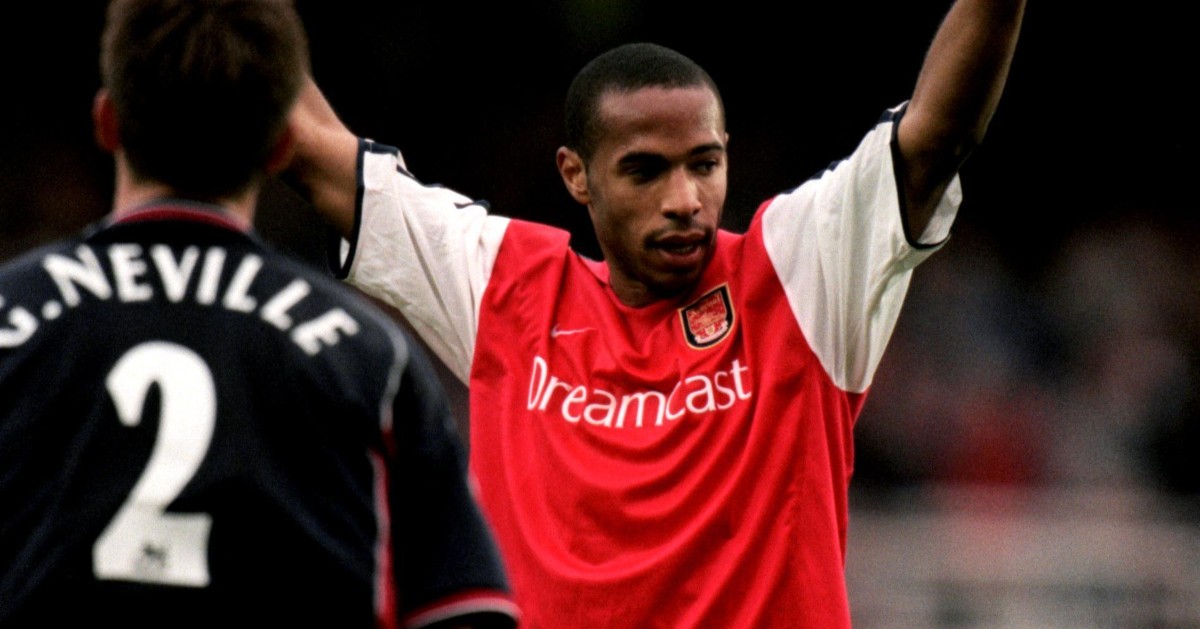 Curtis Jones will cherish his part in Mo Salah’s exquisite solo goal. Manchester United have been on both ends of similarly ordinary assists.

That was the third assist of the season for Liverpool midfielder Jones. This is why some people don’t always trust stats, including the Manchester United manager himself.

10) Arnold Muhren to Marco van Basten
It was, by Arnold Muhren’s own admission, “a little bit too far” for Marco van Basten, yet the sensational Swan of Utrecht sent a deep first-time ball back in the general direction of whence it came in spectacular fashion. Netherlands had taken a two-goal second-half lead in the final of the 1988 Euros with a move that even their beautiful minds could not possibly have conceived, choreographed and practised beforehand.

The USSR and legendary keeper Rinat Dasayev were stunned by the moment of genius, a snapshot of perfection born from imperfection. Had the delivery reached its intended destination, it might have been met with a bullet header or a knock back across goal for the lurking Ruud Gullit. As it was, Muhren “gave a lot of much better crosses” throughout his career, but none nearly as important.

32 years ago today Arnold Muhren pings the ball to Marco Van Basten,
who casually hits one of the greatest fucking volleys of all time.

The look of shock on the face of Dutch boss Rinus Michels sums it up.

What a goal. What a player.pic.twitter.com/HBRRVoXwQb

Before branching out into conspiracy theory and anti-vax rhetoric, the only far-left Le Tissier indulged in was when he floated towards that flank. That tactic paid dividends to break the deadlock against Newcastle in October 1993. A long ball forward found Dowie in space but his header down was slightly behind Le Tissier. No problem, the Saints legend figured, as he checked his own run and flicked the ball up with his left heel, then poked the ball past one defender, scooped it over another and side-footed it around the keeper with his right. Barry Vension, Kevin Scott and Mike Hooper were victims of the destruction, and Dowie a mere bystander.

“It was Iain Dowie that had knocked the ball down to me, so I was always aware that it was possible it could go anywhere,” Le Tissier later recalled. “So when the ball landed a little bit behind me it wasn’t a massive surprise and I was able to adjust my body and get a little flick up.” It’s like Michelangelo saying some Sistine Chapel work-exer forgot to get enough red paint so he had to improvise.

8) Tom Carroll to Gareth Bale
Mark Clattenburg might not need Howard Webb but Tottenham required the Rotherham ultra’s intervention – or lack thereof – against West Ham in February 2013. When a piercing run from Gareth Bale, bursting from his own half into Hammers territory and what was then fully established to be His Range, was unlawfully impeded by Joey O’Brien, the referee played advantage. The game was balanced in the final stages at 2-2 and it would soon turn out to be an inspired decision.

As the ball was rolled to the feet of Tom Carroll, Bale was in the process of hitting the floor in frustration at a foul not being awarded. Quickly realising Tottenham still had possession and West Ham had vacated the immediate space around him for fear of reprisal, Bale called for the pass. In the most hilariously unnatural way possible, Carroll put a sort of flourish on a simple, unchallenged five-yard ball, still managing to play it slightly behind Bale, before the Welshman gathered it and assessed his surroundings, unleashing a trademark drive into Jussi Jaaskelainen’s top left corner. Carroll, currently of Ipswich, has seven Premier League assists to his name, which is a solid return considering it looked like he had only heard rumours of how to kick a ball almost nine years ago.

7) Steve Lomas to Georgi Kinkladze
Many clips start with the ball at the feet of Georgi Kinkladze on the right wing, the Manchester City hero dropping a shoulder to deceive Simon Charlton, adding a deft touch to avoid Ken Monkou as he entered the penalty area, then rounding the desperate slide of David Hughes, bringing a merciful Dave Beasant to his knees with a couple of dummies and dinking it into the Southampton goal.

Sounds overrated. Steve Lomas clearly did all the work when sauntering forward just past the halfway line and rolling the ball forward before watching the carnage unfold. Kinkladze had unloaded the gun and left bodies in his wake but Northern Ireland’s favourite son was culpable for supplying the bullets, even if it did seem like a certain blank.

6) Sergio Busquets to Lionel Messi
The ball moved no more than two or three yards from the point Sergio Busquets first touched it, yet his part in an iconic Champions League goal was indelible. He chose a semi-final against Real Madrid at the Santiago Bernabeu to switch sports and indulge in a spot of walking football, strolling into space and providing a checkpoint for Lionel Messi to bounce off like a powered-up video game character. The mere presence of Busquets fooled Lassana Diarra into thinking there wasn’t a gaping midfield space for the world’s greatest footballer to sprint into, subsequently pulling Sergio Ramos and Raul Albiol out of position as they hoped to counter the impending threat. Messi glided past both, rode the challenge of Marcelo and slid the ball past Iker Casillas. The run and finish was sensational; the two touches from Busquets were genius in their simplicity.

What an assist by Busquets! Messi had it on a plate. pic.twitter.com/PIXWAwfLGY

5) Jan Vertonghen to Heung-min Son
“Without you probably I would not score this goal” came the belated appreciation from Heung-min Son, more than a year after Jan Vertonghen laid on his Puskas Award-winning goal against Burnley in December 2019. “Of course not,” replied the centre-half, who had since joined Benfica as their new elite playmaker to ensure his natural creativity would be properly cherished and nurtured.

A halfway-line punt from Dwight McNeil was aimed towards Sean Dyche’s favourite place – the general direction of James Tarkowski’s head – but Vertonghen managed to poke a leg around his actual opposite number and nudge the ball clear. Son was a couple of steps outside of his own area yet he rendered Burnley’s entire left side obsolete, blitzing six players and beating Nick Pope with a composed finish. It took him a matter of seconds to whip up a gourmet meal with basic ingredients.

4) Shola Ameobi to Papiss Cisse
An unlikely common thread running through some of Newcastle’s greatest modern moments is the considerable presence of Shola Ameobi. His ungainly backheel put Alan Shearer in to become the club’s all-time top scorer against Portsmouth in February 2006, with that combination also undoing Everton in December 2002 when Ameobi’s looping header met a thunderous right-footed volley from Shearer. The only thing missing from the Nigerian’s collection was a hand in Philippe Albert’s seminal chip against Manchester United, considering Ameobi also contributed to one of the Premier League’s greatest strikes towards the end of his Magpies spell.

Newcastle were heading towards a crucial victory at Stamford Bridge in their unlikely quest for Champions League qualification in May 2012. As stoppage-time nerves took hold, they won a throw-in midway into Chelsea’s half. Ryan Taylor launched the ball towards Ameobi, whose routine chest down sparked the nearby Papiss Cisse into life. Having opened the scoring with a wonderful first-half goal, the forward was imbued with enough confidence to strike the ball first time with the outside of his boot as it angled over Petr Cech and into the far corner. Shola the substitute had worked his magic again.

3) Gilles Grimandi to Thierry Henry
The foul from David Beckham on Freddie Ljungberg was in an innocuous position, wide on the left and 40 or so yards out. Yet two quick passes later, Manchester United had been undone. Nwankwo Kanu cushioned the free-kick into Gilles Grimandi, who played a slightly short ball into the feet of Thierry Henry. The pass was weighted relatively poorly, almost bobbling by the time it reached a forward with his back to goal, outside the area and with Denis Irwin trying to administer some sort of enthusiastic stop-and-search protocol. One flick, spin and volley later, Fabien Barthez was beaten.

If intentional in that it afforded Henry time and space to manoeuvre, it was a wonderful assist. As it is, subsequent viewings only reinforce the idea that it was a hospital ball Henry breathed life into, an out-of-date lemon that the Frenchman squeezed every last drop out of to quench Arsenal’s goalscoring thirst and leave Manchester United feeling bitter.

2) Brian McClair to David Beckham and Eric Cantona
To form the prelude to one moment of individual brilliance is fortunate, but to do it twice in the same season cannot be down to coincidence. Brian McClair provided backing vocals to two of Manchester United’s greatest tunes of the 1990s, leaving vague fingerprints over two brilliant goals scored within the space of five months.

It was he who stabbed a loose ball to David Beckham against Wimbledon on the opening day of the 1996/97 season, the Manchester United winger electing not to even vacate his own half but instead checking Neil Sullivan’s ego and measuring a glorious effort over the goalkeeper’s head.

By December, McClair repeated the trick of ordinarily assisting an extraordinary goal. This one required a little more effort of mind and body, providing a wall for the one-two after Eric Cantona had wriggled free of Sunderland’s attention on the same halfway line Beckham had made his name from a few months prior. As Cantona burst forward, his pass to McClair dragged the final defender out of position and he regained the ball two touches later, chipping it over Lionel Perez to make it 5-0 to Manchester United in the 80th minute and perhaps put the game past the neutered Black Cats.

1) Hector Enrique to Diego Maradona
“With a pass like that, he could hardly miss.” So goes the quote from Hector Enrique, who has never lamented how his 15-year career is defined by another player’s bout of invulnerability. The former midfielder has positively embraced a part in history, his hand in an iconic moment that is justifiably only ever attributed to one man.

Maradona left five England players floored and flawed after collecting a pass in his own half with his back to goal. The assist itself, on second viewing, might even have been intended for Jorge Burruchuga. Only Enrique will know. But the 11-cap international has remained as relevant as ever in the decades since, becoming a cultural reference point in Argentina whenever a player precedes someone else’s moment of inspiration with a more rudimentary act.