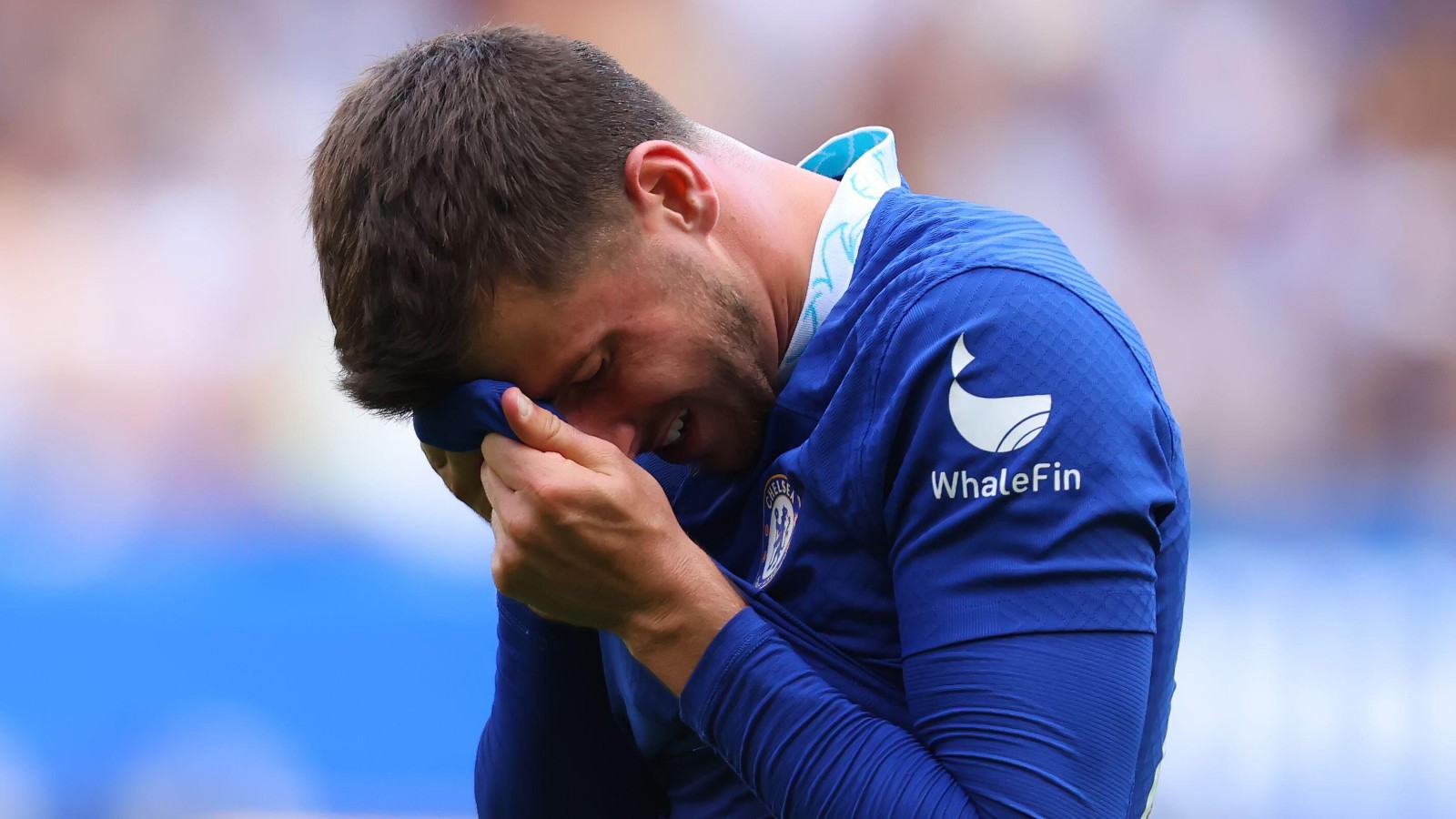 The Premier League season heads into an international break with some clubs, managers and players as absolute let-downs. Poor Liverpool.

10) Heung-min Son
Not the best start, this. Already been exposed as a lazy clickbait bias agenda nonce journalist and it’s honestly difficult to argue.

On a serious note, it will be interesting to see whether Heung-min Son’s belated renaissance was simply the natural consequence of facing a Leicester defence incapable of closing down, deploying a high line, tackling, running, passing and generally playing football, or if his hat-trick was the preamble to an actual upturn in form against professional teams. The point stands: those 31 phantasmagoric minutes are currently the exception to a rule of post-Golden Boot refractory period frustration.

9) Casemiro
While the initial reaction might be to scoff, there is really no way of describing Casemiro’s inability to find a route past Scott McTominay and into the Manchester United midfield as anything other than a disappointment.

The whole point of spending £60m on a 30-year-old was that he would slot straight into a team which has lacked central solidity since the dawn of time. It was three days after the 4-0 defeat to Brentford when Manchester United were first said to be considering breaking the Casemiro glass in case of emergency, immediately solving many of their problems with the addition of a world-class defensive midfielder. He was not sold as an answer to every question, but certainly some.

Instead, Erik ten Hag has a five-time European champion collecting dust on his bench while McTominay surreptitiously drains Casemiro of his lifeforce. The Scot will be dropped at the slightest hint of a fall in standards but this stay of execution has lasted far longer than anyone expected and now the intrigue as to what Manchester United could look like with a proper screener has dissipated.

8) Newcastle
In a Premier League table comprised only of results since Eddie Howe’s appointment at Newcastle, the Magpies have accrued more points than any team outside the Big Six and are a single draw behind Manchester United’s tally. Yet the recent trend is downward: a reversion to the mean puts a side which started to entertain immediate European aspirations firmly in mid-table.

Five draws from seven games after spending well over £200m in two transfer windows is the sort of return on investment one might expect Steve Bruce to oversee. There remains a desperately worrying reliance on Callum Wilson and Allan Saint-Maximin and while the playing style has been drastically changed, those growing pains make for uncomfortable viewing. It is not yet known quite where the tolerance threshold of the new owners rests but it is no leap to suggest Howe is under increasing pressure.

7) Steven Gerrard
The most dissatisfying element of Steven Gerrard’s reign at Aston Villa thus far is the lack of identity. It is difficult to recognise the real hallmarks of his team and often just as hard to figure out precisely what is being coached beyond defensive diligence and hard work.

The same could have been said of his predecessor’s side in his last couple of seasons at least. Dean Smith was sacked because the board had “not seen the continuous improvement in results, performances and league position which we have all been looking for”. His last 36 games brought 12 wins, six draws and 18 defeats; Gerrard’s 36 matches in charge so far include 13 wins, six draws and 17 defeats. They were 16th when Smith was sacked and 15th close to a year later. Considering the expenditure in that time, losing to Bournemouth, Crystal Palace and West Ham in the opening two months isn’t close to good enough.

6) Frank Lampard’s children
Henry Winter bloody well warned Thomas Tuchel but one of the German’s last acts in charge was to sanction the permanent sale of Billy Gilmour to Brighton. Between that, the failure to implement Conor Gallagher into an ailing system and the malaise in which Mason Mount finds himself, the Chelsea kids are not exactly alright.

Reece James is doing well enough, albeit with a couple of customary hitches. Ruben Loftus-Cheek is back in the picture. Armando Broja looks bright. And things might change soon under Graham Potter. But Trevoh Chalobah has disappeared, Callum Hudson-Odoi and Ethan Ampadu are out on loan and Chelsea have started to lean on experience once more. The academy cannot afford to fade back into obscurity – and with the talent it is producing, it really shouldn’t.

5) Bruno Lage
“When I came here the project was not a revolution. It was evolution,” Bruno Lage said in August. He claimed Wolves “tried to play with a different style, to have more of the ball” in his first season. They went from having 49.7% possession on average in Nuno Espirito Santo’s final season to 49.3% with a worse passing accuracy under Lage in 2021/22.

The Portuguese has since sought to change the club’s time-honoured system. Three central defenders are no more, replaced with a tactical fluidity which has seen Wolves use a 4-3-3, 4-2-3-1 and 4-1-4-1 to mixed results so far this season.

Lage has at least set a public schedule by which this transformation can be assessed. “I do not mean in terms of points or goals, but when I expect them to look solid is in the middle of November,” he said at the start of the campaign. “That is when I will be able to say, this is our team. That is a good moment to think that the team will be in a good position in terms of how they are playing and also in terms of the table.”

The manager also called for supporters “to be patient” and pointed to the injuries which have undermined much of their work. But the moment of realisation for Wolves cannot come soon enough: only seven clubs have ever scored fewer goals in their opening seven Premier League games and none of them went on to finish higher than 11th. After a quite significant spend, that is a regression which might not be accepted when more attacking football was promised.

Yet to register an assist since the second leg of the Champions League semi-final against Villarreal in May, the right-back’s offensive contribution has dropped off. But it is his defensive regression – from a point many would argue was already an issue for Liverpool – which has been most striking.

At his best, Alexander-Arnold costs Liverpool perhaps one goal every few games through poor positioning or a lack of awareness, but counteracts that by excelling as their chief creator. That trade-off made any setback worth it but the balance is not even close to being struck.

3) Nottingham Forest
It turns out that making one signing for each of the years spent outside the Premier League before returning is not overly conducive to successful squad building. For Fulham or Norwich that would represent a gross underinvestment but Nottingham Forest’s two-decade splurge has had its own drawbacks.

Steve Cooper admitted that “there’s a sense of the unknown” surrounding any team he picks currently, but “what we’ve got to do is try to quickly build our bank of knowledge on these players and “quickly become one, as quick as we can”.

Speed is certainly the issue. After seven games, Forest have only beaten West Ham in 18th and held draw masters Everton at Goodison Park. Their five defeats have included decent but ultimately futile efforts against Newcastle and Spurs, an Erling Haaland humbling and, most damning of all, the surrender of leads at home to their promoted brethren, conceding thrice both times in the process.

2) David Moyes
The vote of confidence, dreaded or otherwise, has been issued. Yet those familiar with the stylings of David Moyes would have recognised one of the first signs of pressure he displayed after the defeat to Everton. The Scot loves to blow off steam with a passive-aggressive journalist exchange and this was an absolute classic of the genre, right down to the Dr. Evil laugh and gradual realisation that no-one else was actually joining in.

Honestly, do you know how difficult it is not to bring a press conference full of football writers to floods of sycophantic tears through guffawing. All you have to do is answer one of their phones which they definitely purposefully didn’t put on silent and all of a sudden Peter Kay is screaming about garlic bread into the void that was the mid-2000s.

Moyes has done a phenomenal job at West Ham. But that only affords him so much credit, particularly when it is his specific stubbornness which is causing many of their problems. The same formation is being used with the same players as Tomas Soucek, Jarrod Bowen, Pablo Fornals and Lukasz Fabianski enjoy a bizarre level of managerial protection.

Gianluca Scamacca, Maxwel Cornet, Flynn Downes and Alphonse Areola were signed for a combined £70m or so in the summer and Said Benrahma would probably like a word too. Or Moyes can keep cooking up something inedible with those stale ingredients before serving it with a painfully forced smile, a few hundreds caveats and a sprinkling of profanity.

1) Leicester
They are bottom and have conceded the most goals of any Premier League club ever after seven games. We’re not angry, just disappointed. Except Leicester fans probably are pretty angry.