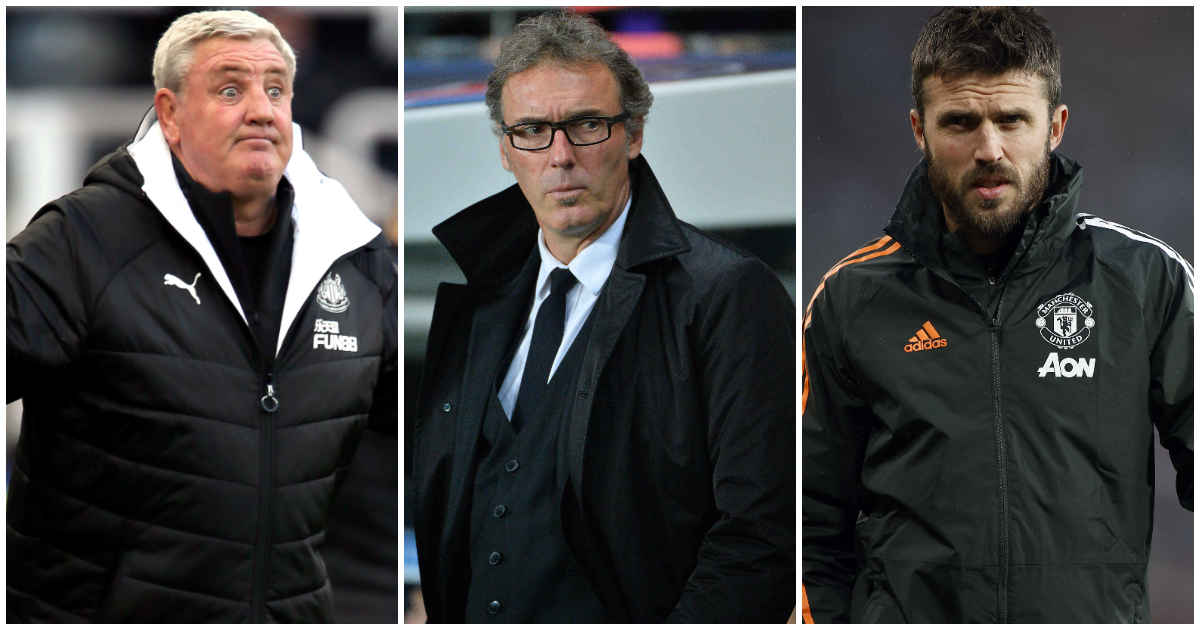 The race is on for Manchester United to find an interim manager to replace the interim-interim manager. Here are ten candidates to consider.

10) Dwight Yorke
We have to assume that the 1999 Treble winner has taken the hint after being rejected three times by Aston Villa, the latest occasion coming before they appointed Steven Gerrard. “I still haven’t been able to get a response,” he said last week. “You just like to be acknowledged but you’re not even getting that.”

The fact he has yet to complete his pro licence won’t have helped his cause – the same goes for the fact he’s never managed a professional side – but for an interim appointment, the criteria is slightly less rigid. Even if Woodward, John Murtough and co. go in a different direction, at least drop Dwight a note.

9) Wayne Rooney
United’s record goalscorer to return as interim manager? It’s maybe not as daft as it might seem.

Rooney is perhaps the only person to emerge from the dumpster fire at Derby with much credit, having got the Rams back on zero points after their 21-point deduction. With a squad hastily thrown together in the closing weeks of the summer, crammed full of limited veterans and inexperienced youngsters, only the top two have lost fewer games than Rooney’s Rams. And one of them they beat on Sunday; the other they face on Tuesday night.

Few would have criticised Rooney for chucking it in at various points in recent months, and no-one would blame him if Manchester United decide they need him to help out in the short term. Not that they will.

8) Zinedine Zidane
The former Real Madrid coach has seemed the obvious replacement for Ole Gunnar Solskjaer since the start of the season, seeing as he has been the only consistently available coach with the kind of CV that should appeal to the Red Devils.

But Zidane clearly does not want the job. Temporary or otherwise. He might fancy the PSG post, though, which could smooth the path to Old Trafford for Mauricio Pochettino.

7) Brendan Rodgers
The Leicester manager would reportedly jump at the chance to manage Manchester United – and, right now, Leicester might be more open to accepting the £8million they would make by letting him leave the King Power.

Rodgers reportedly has supporters on the United board but others are unsure his credentials stand up to scrutiny. And Leicester’s struggles this season certainly don’t enhance his candidacy.

Regardless, Rodgers would love to boss United but his eagerness almost certainly won’t stretch to a six-month long audition as an interim manager.

6) Ralf Rangnick
Rangnick is one of the more credible names that keeps coming up and his track record at RB Leipzig would make him an obvious candidate.

But the 63-year-old has recently signed a three-year contract to serve as head of sports and development for Lokomotiv Moscow. To leave such a role for an interim position would demand further incentive beyond the end of the season. Murtough is said to be a huge admirer of Rangnick, but in the same way turkeys don’t tend to vote for Christmas, United’s football director is unlikely to make the German many big promises.

5) Lucien Favre
The German is one of a few coaches currently out of work but as the summer saga with Crystal Palace highlighted, Favre is being very choosy about his next gig.

Favre, at least, can claim to have once got the best out of Jadon Sancho, which will surely appeal to Manchester United given how the £72million signing is struggling since moving from Borussia Dortmund. Favre “says his players have to suffer in training,” which is unlikely to go down well with some of the more delicate flowers in United’s squad.

4) Rudi Garcia
The 57-year-old is available after leaving Lyon at the end of last season. There he built exciting, winning teams, as he did at Lille where he won the French double. So Garcia feels he’s earned the right to be selective over his next job. If he even takes one…

“There aren’t many clubs that interest me,” he said after leaving Lyon. “It will be a club in Champions League or one that is aiming for it. But it’s 50/50. I could also not coach. I’m pretty picky on the project.”

3) Michael Carrick
Solskjaer’s former assistant is the interim-interim manager and given how we know the Manchester United board works, positive results at Villarreal and Chelsea this week would put him firmly in the frame for a more medium-term arrangement. Or, probably, a three-year contract.

Carrick’s concern is how he leads change when he was one of the faces of United’s failure under Solskjaer. If the players genuinely had concerns over the training and coaching, Carrick, Kieran McKenna and Mike Phelan were culpable in that.

2) Laurent Blanc
The former Manchester United defender was initially tipped for the caretaker role in the immediate aftermath of Jose Mourinho’s December 2018 sacking before it emerged that Solskjaer had been approached about keeping things ticking over. In the time since, Blanc has been managing Al-Rayyan in Qatar.

Some sources say Blanc, who has bossed Bordeaux, PSG and France, has already been approached and will be tempted into the interim gig with the carrot of the permanent position if he can get a tune out of the United players between now and May.

1) Steve Bruce
Apparently, the former Manchester United captain and recently-axed Newcastle boss ‘would be very keen on the role – a shocking revelation – and believes he could help stabilise the dressing room’.