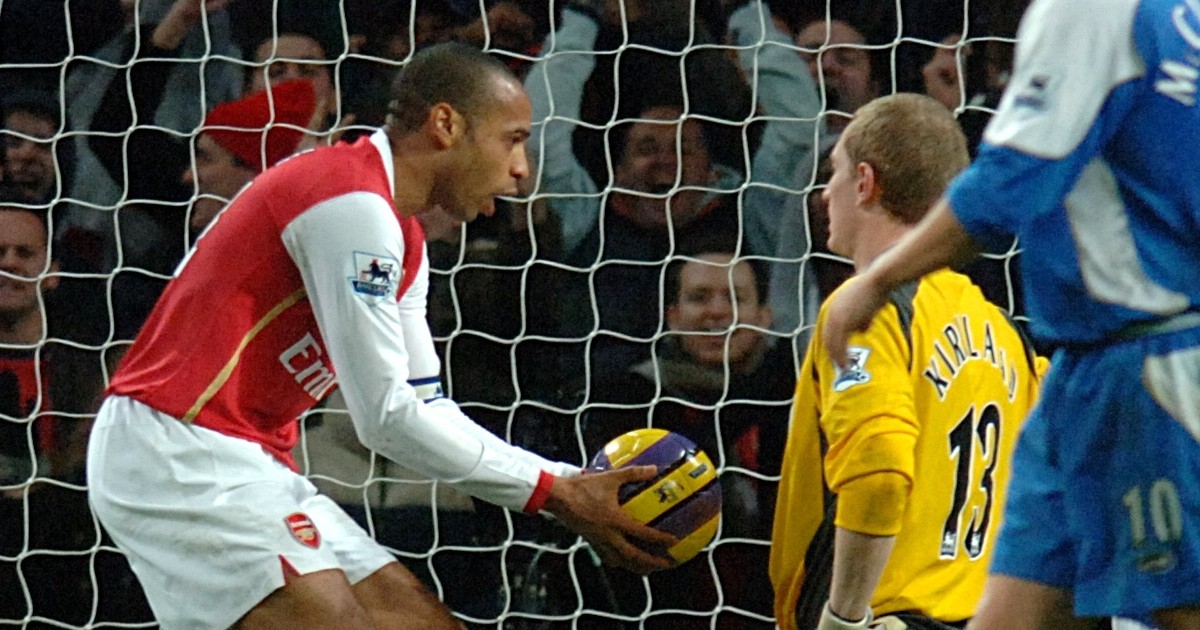 Bruno Fernandes may never get Emiliano Martinez out of his head. The Aston Villa keeper is a fine proponent of sh*thousery, but not the best.

10) Harry Arter v Nathaniel Chalobah
“He called ‘leave it’ and I thought it was Tom Cleverley, because he was behind me,” explained Nathaniel Chalobah, wisely figuring that, whenever possible, blame should be shifted to Roberto Martinez’s favourite player. “But I’ll put my hands up. It was a bit naive and I should have just struck it,” the Watford midfielder continued, cowing to the professional obligation to #FrontUp at all times.

It was pretty funny. Watford and Bournemouth were drawing 0-0 when an unmarked Chalobah looked to latch on to a pull-back and shaped up to shoot before seemingly inexplicably allowing the ball to roll past him. Arter’s shout for the ball was so persuasive that the England international passed up a presentable chance to break the deadlock. Watford eventually won 2-0 because cheats never prosper. And Bournemouth were not great. But mainly the first thing.

Harry Arter giving Chalobah the shout “leave it” to stop him from shooting is the biggest shithousery you’ll ever see lool. 😭😂 pic.twitter.com/DkwTeDPzT8

9) Sadio Mane v Romelu Lukaku
Plenty of players have been ruled offside before but only one has been caught offsnide. Romelu Lukaku added that to his long list of records during Jose Mourinho’s final game as Manchester United manager: a truly humbling 3-1 defeat to Liverpool at Anfield in December 2018.

The visitors almost made the ideal start. Alisson was collecting the ball from his own net after four minutes. But Liverpool had held their line impeccably from an Ashley Young free-kick and Lukaku strayed far beyond the last defender before unleashing an air-shot and distracting the Reds keeper.

Replays explained the true story. Not many systems would have Sadio Mane marking Lukaku from a set-piece but the Senegalese proved the folly of that preconception by perfectly timing a shove and ensuring the Belgian would be spotted by the linesman. It was a calculated risk in the penalty area that paid off instantly.

look at Mane push Lukaku into an offside position just as the ball is played, absolute genius lad. video for educational purposes only pic.twitter.com/fHsMmejbpt

8) Jamie Vardy v the opposition
In the realm of one-sided rivalries, Jamie Vardy versus that section of The Hawthorns is among the most imbalanced. The man ear-cupped an empty stadium in a 3-0 win and West Brom couldn’t do a thing about it. He has also previously celebrated for shushing Pepe Reina, obliterating a corner flag, mimicking an Eagle at Crystal Palace and howling like a wild carnivorous mammal which is the largest member of the dog family, living and hunting in packs, against Wolves.

The best one was when he quite patently declared “all mine, all f**king mine” after breaking Ruud van Nistelrooy’s record of scoring in the most consecutive Premier League games in November 2015, before claiming post-match that “the main thing was to get a performance”. Sure it was.

7) Steven Taylor v Asmir Begovic
You, a nerd, probably think the best moment of Steven Taylor sh*thousery was that handball in possibly the most pure Barclays game of all time against Aston Villa in 2005. I, an intellectual, know it came eight years later. A 2-1 win from behind at St James’ Park against Stoke helped push the Magpies further towards safety and though their centre-half neither scored nor did enough of any note to receive a mention in match reports at the time, his impact on Asmir Begovic was indelible.

Yohan Cabaye standing over a free-kick is a daunting enough prospect alone for most goalkeepers but Taylor jumping around like a child high on sugar with a full bladder, mirroring Begovic’s every action as he tried to organise his wall, must have been slightly off-putting. The effort would have gone in without such histrionics but as the Stoke keeper lay prone after clattering into his own post, Taylor rubbed salt in the fresh wound by goading him one final time and collecting the ball to carry it back to the centre circle and continue the comeback.

6) Matteo Darmian v Micah Richards
Scotland defender Stephen O’Donnell recalled this summer how he disarmed Jack Grealish by “telling him how good-looking he was”. Radamel Falcao recently spoke of how Jose Gimenez “asked me questions” and “was driving me crazy” to the point that the Colombian couldn’t focus at set-pieces or time his runs properly. Edouard Mendy kept a clean sheet against Fulham earlier this year despite Bobby Reid trying to undo his gloves at a corner. Tyrone Mings assisted a Trezeguet goal for Aston Villa against Arsenal in July 2020 with a front-post flick after distracting his marker, Pierre-Emerick Aubameyang, with an apparent joke.

“I think they’re playing catch to be honest,” was the assessment of Micah Richards for that last example. “They’re having a bit of a laugh and a joke and then look, he’s gone.” The pundit presumably learned all he knew about such underhanded brilliance from Matteo Darmian who, shame on Richards, fooled him twice at separate corners during a game between Aston Villa and Manchester United. The Italian first convinced the player he was marking that he had something on his face, then confused him by offering a handshake before a later delivery. “It was because he had a cut on his face and I was trying to tell him it was bleeding,” Darmian insisted after the game, because a magician never reveals his tricks.

5) Emiliano Martinez v Bruno Fernandes
Yerry Mina finally has back-up in his Emiliano Martinez victim support group. The Aston Villa goalkeeper might not have saved Manchester United’s stoppage-time penalty at Old Trafford but he certainly contributed to the pronounced nature of the miss. Ole Gunnar Solskjaer did not appreciate the way his player was surrounded at a time of immense pressure, yet simultaneously insisted “it doesn’t get in Bruno’s head”. The evidence to the contrary continues to rise over Martinez’s bar while the Argentinean gyrates the home fans into oblivion. That is one confident boy.

4) Jens Lehmann v Wigan
The doyen of goalkeeping shithousery is still Jens Lehmann. Few shot-stoppers embraced mass brawls quite so much, regardless of how far he would have to sprint to ensure he was involved. The German was also prone to a dive, less in the traditionally helpful sense but more in terms of play-acting and histrionics. That one exchange with Didier Drogba in December 2006 was a fascinating insight into the fragile psyche of the alpha male athlete.

That maverick nature was not necessarily always destructive or chaotic. It could be calculated, strategic and more passive than aggressive. Time has rarely been wasted quite as effectively as in February 2007 when Wigan travelled to the Emirates. An early Denny Landzaat goal gave the Latics a lead that Chris Kirkland was particularly reticent to relinquish. His antics – standard fare in such circumstances – riled Thierry Henry in particular, to the extent that the Frenchman made a note of celebrating in front of him when ‘One Size’ Fitz Hall’s own goal gave Arsenal a deserved equaliser.

Pearls were clutched. Apologies were demanded in the aftermath as football did that thing where it collectively just takes leave of its sensibilities. But the best was saved until last, when Tomas Rosicky’s 85th-minute winner was followed by Lehmann fetching an errant shot behind his goal and, despite standing almost directly over the advertising hoardings, contriving to throw the ball into them before jogging after the rebound as the seconds whittled away. It was true theatre.

3) Dennis Wise v Nicky Butt
Sir Alex Ferguson once quipped that Dennis Wise could start a fight in an empty house. He had a little help from Nicky Butt in October 1999 when the pair nearly caused a full-scale Stamford Bridge riot. A high boot that Nigel De Jong would be proud of left both on the turf in the centre circle as Chelsea led 2-0, Wise the aggressor and Butt the casualty. The Manchester United midfielder milked the challenge somewhat – Wise had crashed into him but Butt clutched his head despite not being caught – and it descended into chaos from there. Wise seemingly pinched the inside of Butt’s thigh, Butt suddenly rose to his feet and grazed Wise’s ribs with a knee and armies of red and blue sensed there might be danger.

Wise actually managed to scuttle away to the outside of the subsequent melee, feigning to check on his boots at one point. He was booked. Butt was sent off. Chelsea won 5-0 and in the words of the Blues midfielder: “That hurt didn’t it, you ginger b*stard?”

2) Emmanuel Adebayor v Arsenal
An entire list could be dedicated to celebrations, with Luis Suarez diving in front of David Moyes after the Everton manager accused him of going down too easily being a particular highlight. Henry against Tottenham is up there. Gary Neville against Manchester City, too. The watershed moment for revelling in a goal, though, belonged to Emmanuel Adebayor. Manchester City beating Arsenal 4-2 was ordinarily headline news little over a decade ago but the Togo international ensured most column inches would be dedicated to him alone.

Adebayor showed contrition within an hour of sprinting the full length of the pitch to share his moment of goalscoring joy with delighted Arsenal fans. In his post-match interview he apologised repeatedly and explained that “emotion took over” in the moment. Not a day goes by when each of us are not grateful it did.

1) Martin Keown v Ruud van Nistelrooy
The single greatest achievement in the history of football, sport and possibly even human history as a whole was when Ruud van Nistelrooy resisted what must have been the most pressing of all urges to test the structural integrity of Martin Keown’s jaw. Meetings between Arsenal and Manchester United were tempestuous, explosive and toxic around the turn of the millennium, coming to a head in September 2003 when the Invincibles lived another day.

It was towards the end of a 0-0 draw at Old Trafford when Van Nistelrooy had the chance to end Arsenal’s unbeaten run at just seven games, Diego Forlan having been fouled by Keown in stoppage time. Van Nistelrooy, who had played a key part in Patrick Vieira’s earlier sending-off, clattered his spot kick against the crossbar. Keown, perhaps out of sheer relief, leaped towards the forward, bellowed in his face and hit him in the back of the head with a couple of vaguely disguised forearms. Suffice to say he hasn’t changed.