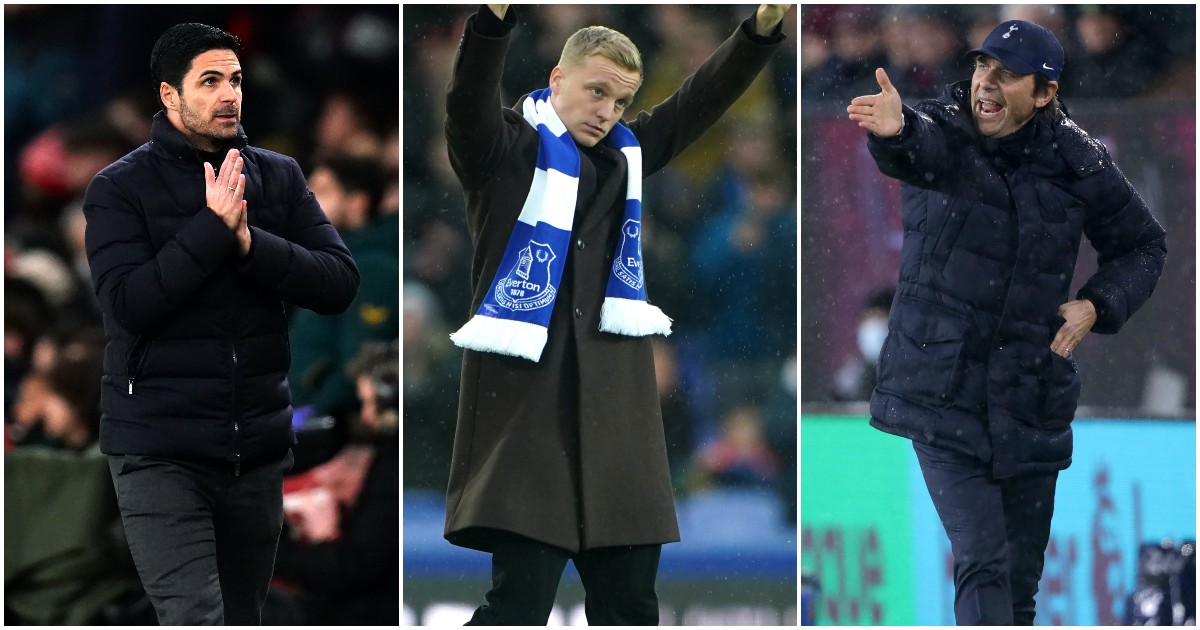 Some January transfer window decisions are already paying dividends, like Newcastle laying down a marker and Arsenal shrinking their squad.

10) West Ham doing nothing
The extent to which West Ham decided not to make any January signings is debatable. David Moyes explained that the club’s inability to recruit “wasn’t for the want of trying” after three record offers for Darwin Nunez, Kalvin Phillips and Raphinha were all rejected. Luis Diaz was targeted before Liverpool expedited their own summer plans for the Porto forward. The Hammers were known to be in the market when it came to strengthening their Champions League qualification charge, that revelatory Jesse Lingard loan the previous year still crisp in the memory as proof that fresh impetus can be externally injected mid-season.

But they actively chose to abstain when those ambitious moves proved unfeasible. Moyes reiterated the need to “spend the money wisely” and avoid bringing in players “just to pad it up”. With option a) of elite additions unavailable, West Ham might have been expected to take option b) of panicking and circumventing the procedure of identifying, scouting and assessing targets by just signing anyone and potentially derailing their momentum. So they deserve credit for picking option c) and trusting a hand that, while flawed, can match any direct rival for quality, if not depth. Since the window closed, narrow victories over Watford and Wolves, as well as scrappy draws against Leicester and Newcastle, have helped them keep the pace. Michail Antonio remains a strong gust of wind away from injury without a viable back-up, numerous players look knackered and the lack of reinforcements could backfire at any moment. Yet Moyes has cultivated that combative mentality in a tight-knit group.

9) Aston Villa bringing in Philippe Coutinho
The honeymoon is over but the marriage is still a convenient and comfortable arrangement for all parties. Barcelona are evolving under Xavi; Philippe Coutinho has found a safe if temporary haven in Birmingham. The Brazilian scored and assisted two goals each in his first three appearances but was without either from the successive defeats to Newcastle and Watford, as well as the return to club form with victory over Brighton. That 2-0 win featured a less spectacular but more industrious and disciplined performance from Coutinho, who initially lifted morale with his mere presence and can now help raise standards as a Barcelona alumnus and former Steven Gerrard teammate.

8) Everton rescuing Donny van de Beek
How surprising that Donny van de Beek might have been forced out of his most promising Everton game yet through cramp. The Dutchman started his third Premier League match for the Toffees less than a month after joining, impressing in a more reserved role against Manchester City. In 18 months at Manchester United before this loan, Van de Beek only managed four Premier League starts. Ole Gunnar Solskjaer’s permanent successor could consider bolstering the club’s faltering midfield from within, this short spell effectively dismantling the myth that English physicality was the former Ajax player’s undoing.

Van de Beek acclimatised well against Leeds, was ineffective at Southampton and thrived with more responsibility when the champions visited Goodison Park. Five key moments summed up the Dutchman best in the defeat to Manchester City: the crunching tackle on Ilkay Gundogan that earned a yellow card; the tracking back to prevent counter-attacks on two separate occasions; his intervention to deprive Phil Foden of an open net after two fine Jordan Pickford saves; and the end of the hosts’ resistance just 11 minutes after he had been substituted. That was likely a coincidence. Everton’s improvement and increased stability since he joined is anything but.

The job Van De Beek is doing here can’t be underestimated. He’s been comfortable on the ball but his work off it has been brilliant.

7) Manchester United trimming their squad
“There were players unhappy, the squad was too big. Players realised they wouldn’t get game time and the atmosphere is better than it used to be a couple of weeks ago,” said Ralf Rangnick, suggesting that simply removing Van de Beek and Anthony Martial made the Manchester United equation far easier to configure. With Amad Diallo moved to Rangers, Axel Tuanzebe switched from Aston Villa to Napoli and Teden Mengi also sent to Birmingham, a bloated squad had finally received necessary surgery. Those unerringly regular dressing-room and training-ground leaks happen to have subsequently dried up.

Manchester United have not been in imperious form since – although a Champions League quarter-final berth is eminently possible and one Premier League defeat since November 20 represents genuine progress. But the crucial aspect is that the painstaking process of remodelling this squad is underway and the future consultant will be best-placed to advise on the players his managerial heir inherits. They should step into a more cooperative climate than that which Rangnick faced, not least thanks to his temporary January sacrifices that made it clear Manchester United would no longer hoard all their underperforming toys.

6) Tottenham swapping four for two
Antonio Conte’s argument was always more that Tottenham had technically disadvantaged themselves, offloading four first-team players to bring in two. He outlined that this was specifically “numerically” true: the club had “on paper, weakened” by trading in Tanguy Ndombele, Giovani Lo Celso, Dele Alli and a shiny Bryan Gil, securing store credit to buy and borrow a pair of “prospects” from Juventus. Rodrigo Bentancur upgraded their midfield options; Dejan Kulusevski refined the entire attack.

That £33m option on the latter becomes more tempting with each fixture. Conte has already scaled back on the implication that Kulusevski, while talented, is currently “not ready” and requires more years of experience and development to reach the requisite standard. The 21-year-old forward has scored twice and set up one goal, playing at right wing-back, wide forward and as a No. 10 along the way. That versatility, combined with a relentless work-rate, positive attitude, sumptuous technique and ability to quickly forge an understanding with the established forwards, makes him the “ideal” Tottenham signing that Conte foresaw, but in the present as well as the future. Kulusevski and Bentancur fill half the spaces Ndombele, Lo Celso, Alli and Gil did, while offering more than twice their combined output.

5) Burnley evolving their attack at a profit
Burnley were said to be ‘furious’ at losing Chris Wood to Newcastle, despite it being very much the consequences of their own actions in writing a release clause into the striker’s contract. Two things it afforded the Clarets was time and money: the £25m sale was completed in mid-January and so Sean Dyche and his recruitment team had a chance to pinpoint and procure his replacement. But every club in Europe knew their situation and could exploit it freely. Plus Burnley had signed four strikers since Wood joined in summer 2017, and with respect to Jay Rodriguez, Peter Crouch, Matej Vydra and Nahki Wells, this would require a more productive solution.

With the cards stacked against them, Burnley brought in a younger striker with more dimensions for less than half the price they sold Wood for. Wout Weghorst has further advanced an attack that Maxwel Cornet helped expand. The Clarets have lost once since the Dutch forward joined and taught us what good feet for a big man really look like.

4) Newcastle knowing their limits
Wood was the only outwardly attacking signing Newcastle made in their first transfer window since assuming all of the money. Kieran Trippier, Dan Burn and Bruno Guimarares all offer something going forward but their primary intention was to improve the defence and midfield. While Wood gave them more options up front, Callum Wilson was not alone in “looking forward to the club bringing in another striker”.

“I think we needed one more as well,” the Newcastle No.9 added, echoing the thoughts of a fanbase that hoped all gaps would be covered with unlimited funds. Moves for Lingard and Hugo Ekitike were not pursued once it became clear the finances made no sense, as the Magpies underlined that their pursuit of anything shiny would still be in thrall to common sense. Lille and Sevilla similarly moved the goalposts to see just how far Newcastle’s owners would go, before discovering they could show restraint. Eddie Howe has instead resorted to actual coaching, inspiring a seven-game unbeaten Premier League run by improving Fabian Schar, Ryan Fraser and his three midfield Joes: Willock, Linton and Jon Shelvey.

3) Pierre-Emerick Aubameyang starting afresh
A goal every 56.25 minutes for Pierre-Emerick Aubameyang in La Liga underlines just how troubled his Arsenal career had become. The striker failed to score in over seven hours of Premier League football before his departure, an excellent three-and-a-half years or so culminating in months of fractiousness and strain. Aubameyang was no longer fit for Mikel Arteta’s purpose but those who believed the Gabon international’s powers to have waned completely have already had their reality checked. The 32-year-old has been reinvigorated by a new challenge in fresh surroundings, netting a hat-trick, firing in the Europa League and helping galvanise Barcelona: they have not lost since he joined and this wreckage of a season looks entirely salvageable.

2) Arsenal cutting weight
But that barely amicable parting of the ways on February 1 might retrospectively reflect even better on Arsenal. While the Gunners must stop releasing former record signings as free agents at some point, their frugal window has proved prescient and widespread predictions of a self-inflicted downfall are yet to come to pass.

‘Arsenal have essentially cut weight for a bout of marathon boxing against at least three opponents,’ wrote one incredibly handsome but dreadfully endowed man last month. ‘Their January inaction raises the stakes to almost uncomfortable levels with no margin for error. Mikel Arteta has to deliver Champions League qualification in May or any defence of his premature winter budgeting is rendered moot. He and his team are geniuses if it pays off; they will be aware of the consequences if it doesn’t.’

That was always the deal: Arsenal’s mid-season business would be judged solely on outcome bias. They have won all three matches since, going from sixth and two points off fourth with a game in hand on February 1, to sixth and two points off fourth with three games in hand on the first day of March. They are in complete control of their Champions League fate because it turns out Pablo Mari and Sead Kolasinac weren’t the ones holding it together behind the scenes. Those Emirates chefs might need to make enough humble pie for the entire nation.

1) Liverpool fast-tracking Luis Diaz
It made Daniel Levy consider reporting Liverpool to Liverpool. Luis Diaz has also won a trophy after six appearances and plays like the physical manifestation of a Jurgen Klopp fantasy. The 25-year-old can help lead the club’s recasting of their successful attacking sequel. But one fundamental truth will always exist: Levy was so enraged at another club lawfully negotiating a transfer that he contemplated grassing on them to themselves. That automatically makes Luis Diaz the greatest signing in Liverpool history.