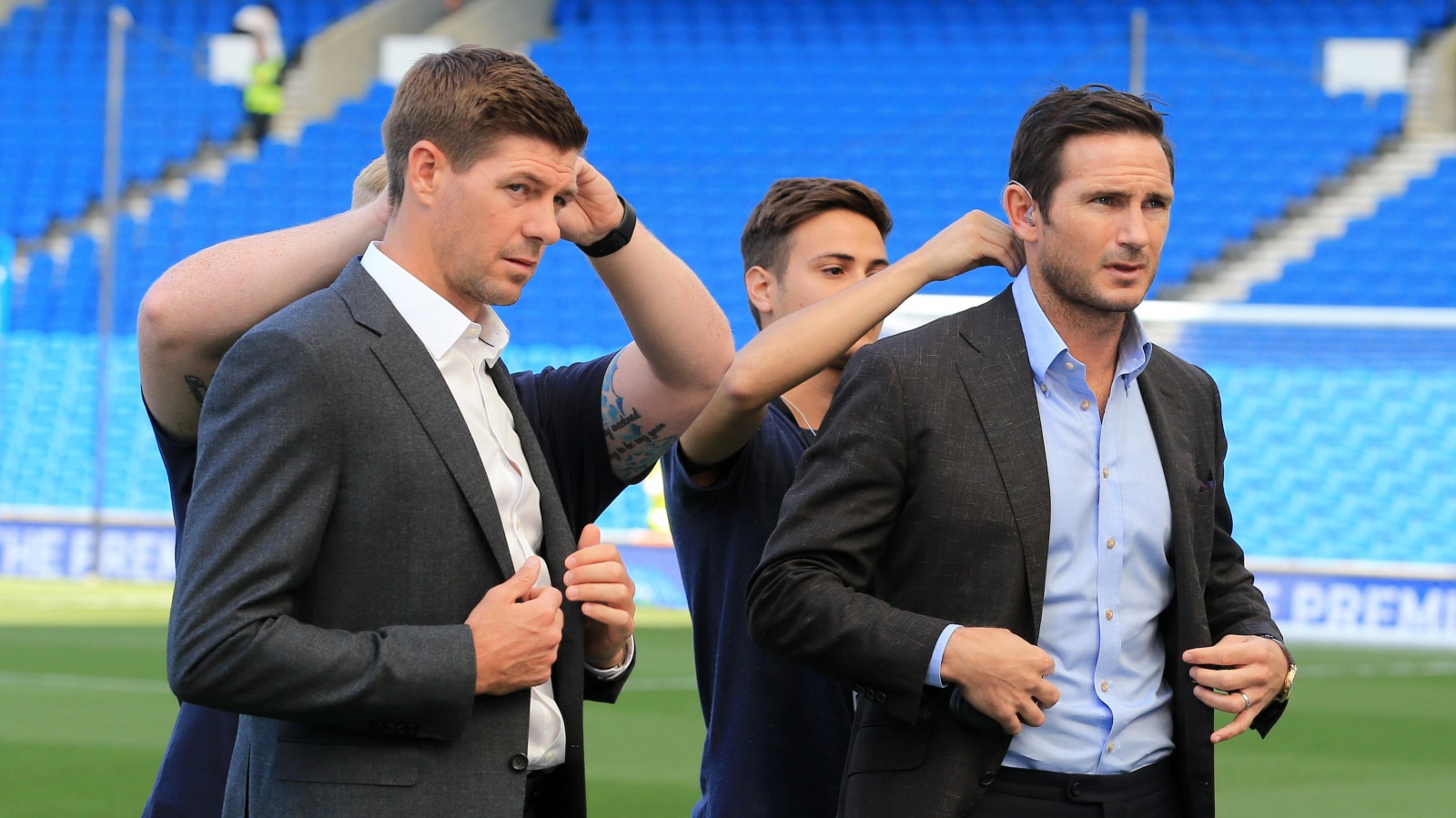 The opening Premier League weekend tells us absolutely everything we need to know, like Steven Gerrard being sacked and Frank Lampard staying.

10) Ralph Hasenhuttl will be the first Premier League manager to leave his post
There are sexagenarians who discuss retirement less frequently and fragrantly than 55-year-old Ralph Hasenhuttl, whose public proclamations that he doesn’t wish to be like Roy Hodgson are quite frankly starting to feel personal.

Hasenhuttl has two years left on his Southampton contract and the suggestion is that upon that deal’s expiration, he will walk away from the game after almost two decades as a manager, a quarter of which would have theoretically been spent in England.

But the Premier League’s fourth longest-serving Premier League coach, behind Jurgen Klopp, Pep Guardiola and former Championship dugout prowler Thomas Frank, might not make it that far. Southampton have won one Premier League game since March – obviously against Arsenal – and a chastening opening defeat at Spurs means their record over the last 14 matches is W1 D2 L11 F11 A38. It is beginning to feel like the only real variable is whether he walks before he is pushed.

9) Erling Haaland will break the record for most goals in a Premier League season
‘HAALAND: ‘I WANT TO HAVE FUN AND SCORE GOALS’ shouts the headline on the Manchester City website. And it turns out the Norwegian is all out of fun, which was presumably had in the aftermath of a Community Shield performance which encouraged some truly peculiar takes about whether a prodigious centre-forward with no discernible weakness can actually fit into the best attacking side in the world or not.

So that leaves him with only goals, two of which were plundered against West Ham in the ultimate tease of many more. Haaland might have been forced into a rivalry with Darwin Nunez but it is another Liverpool player he should soon find himself competing with. Mo Salah’s marker of scoring 32 times in a single Premier League season is about to face the toughest challenger.

8) Brighton will qualify for Europe
“Why not?” was Paul Barber’s answer when the Brighton chief executive was asked in summer 2021 whether European qualification was realistic for the Seagulls within the next five years.

It is testament to Graham Potter, the boardroom, his squad and everyone connected to Brighton that such proclamations now seem conservative. Brighton were only five points behind Europa Conference League qualifiers West Ham last season and despite the extravagant sales of Yves Bissouma and Marc Cucurella, they already look better with another pre-season in the can.

Another humbling victory over Manchester United, this time at Old Trafford, underlined just how confident and assured this team is. One more record points total and Premier League finish is the minimum expectation\ and that would put continental football on the horizon.

7) Arsenal will finish in the top four
Leicester have competed in the Champions League more recently than Arsenal, whose five-year exile from the competition ought to have ended last campaign. Their late-season implosion to surrender fourth place to Tottenham masked the substantial progress made and only solidified those battle lines drawn between trusting the process and #ArtetaOut.

The faith of the hierarchy has been unwavering and last summer’s £140m investment has been almost equalled in this transfer window on two seasoned Premier League winners, a large goalkeeping man, teenage potential and Martin Odegaard’s stunt double in Fabio Vieira.

But the most important addition of all was that of an adult man in central defence. That is no slight on Ben White or Gabriel but William Saliba is a different breed. Crystal Palace felt that first-hand, struggling to breach those final Arsenal lines and failing to contain a prodigious Arsenal attack.

They should only improve but the base from which they are working already looks impressive.

6) Newcastle will win a trophy
Eddie Howe continued the proud traditions of predecessor Steve Bruce at the start of his Newcastle managerial reign. Eight matches into his tenure, the Magpies were beaten at home by League One side Cambridge United in the FA Cup third round. Mike Ashley would have been dabbing his tears away with £50 notes.

But this feels like a unique opportunity for Newcastle and Howe, who himself has never ventured beyond the fifth round of the FA Cup, with three exits at the League Cup quarter-final stage. The Champions League glass ceiling will not be shattered in the first full season of PIF ownership and so the cups take on added importance as tangible proof of what can and has already been achieved.

Newcastle looked excellent against admittedly limited opposition in Nottingham Forest, working phenomenally hard on and off the ball and operating around the imperious gravitational pull of Bruno Guimaraes. It might be time to finally fulfil Newcastle’s famous club motto of: ‘A decent cup run would be nice.’

5) Nottingham Forest will go down but Bournemouth or Fulham will stay up
The conventional wisdom was that Forest would be the strongest of the three promoted teams. Or perhaps it was more that they were the unknown quantity, the volatile variable in comparison to Scott Parker, Marco Silva and two sides which had only dropped from the Premier League recently.

But 11 new first-team additions to the tune of close to £100m, with far more transfer activity expected from Steve Cooper and friends, can work both ways. The understandable excitement that sort of investment engenders soon gave way to trepidation as Newcastle pulled them from pillar to post and held them at arm’s length for a comfortable victory.

Forest will certainly face worse teams and not all of those new faces were ready to feature, but it was an eye-opening experience that has already dulled their Premier League buzz.

Bournemouth and Fulham had done little business by comparison, led into this season by managers with relegation on their C.Vs in charge of seemingly undercooked squads. But the Cherries popped against Aston Villa and Fulham gave Liverpool a shock. Both sides looked organised and confident of meticulous plans which paid dividends and that bodes well for the rest of the campaign.

4) Manchester United will avoid relegation
That’s the good news. Now for the bad: they will finish no higher than eighth.

The defeat to Brighton might have been blown out of proportion, mind. Bruno Fernandes and Marcus Rashford missed presentable chances at key moments and their preparations were disrupted by injuries in the immediate build-up.

Manchester United were not great but there were signs of life for those willing to look hard enough.

The problem they could encounter is that the teams in the Premier League’s upper echelons are all improving. The rest of the Big Six certainly have. Members of the chasing pack such as Brighton and Newcastle look imposing. West Ham will kick on after being fed to Haaland. A handful of others have shown enough to suggest they might rise up the table, too.

And then there’s Manchester United, scrabbling around for Marko Arnautovic, Adrien Rabiot and Sergej Milinkovic-Savic. Even with his hands tied, Erik ten Hag will make the club better. The problem is that other teams got their sh*t in order a while ago

3) Steven Gerrard will be sacked…
The eye-catching aspect of Aston Villa’s transfer business under Steven Gerrard is the near-£80m spend sanctioned in less than a year. But a closer look at the signings made perhaps betrays the manager’s intentions.

Robin Olsen is 32. Philippe Coutinho is 30. Diego Carlos and Lucas Digne are 29. Calum Chambers is 27. Boubacar Kamara is the exception to the rule at 22 as Gerrard has sought to pack his squad with high-earning experience, as if he thinks he might have somewhere else to be in three or four years.

Villa’s wage bill has subsequently risen to reportedly the seventh-biggest in the Premier League but that investment has reaped scant reward. They have as many points as Wolves and Brentford since the 42-year-old’s appointment and it is still difficult to see exactly how he wants them to play.

That was certainly true in that limp defeat to Bournemouth. For the second season in a row, Villa opened their Premier League season with defeat away at a promoted side; Dean Smith was gone within three months last time.

2) …and Frank Lampard won’t
As the prophecy warned, when one of Gerrard or Frank Lampard goes, the other must stay. And considering the former’s current win ratio as manager (34.5%) is actually lower than that of his eternal rival at Everton (36.4%), it is becoming clearer who should make way.

Lampard seems to curry favour with his fanbase better and frankly there are at least elements of his coaching which are eminently visible. Everton were relatively rudimentary against Chelsea but they posed a latent threat on the counter-attack through fast, skilful wingers, while their resolute and organised defence was only breached by a penalty after an individual mistake.

Conor Coady has since been added to ranks which are also likely to be boosted by Amadou Onana and Idrissa Gueye before long. The lack of firepower remains an issue but Lampard is addressing issues while Gerrard picks random fights with Tyrone Mings.

Plus, out of Aston Villa and Everton, who can actually afford to sack a manager right now?

1) Spurs will finish above Liverpool
Time for those big boy pants. Just got to get my jerky knee through them first and everything will be fine.

The gap last season was 21 points with a Chelsea in between. Liverpool will subsequently scoff at the idea of having to look in their rear-view mirror, so ingrained is the need to only pore over Manchester City’s results and the implications thereof.

But the Fulham draw was nothing new, even if it did eventually preserve a 29-game unbeaten domestic run. The problem is that Liverpool are starting slower and taking longer to assert their dominance than normal. The theme started to develop towards the end of last season and has bled into this.

The impact of losing Sadio Mane might well have been overlooked, while injury to Thiago Alcantara has only seen Jurgen Klopp double down on his insistence that the squad does not need strengthening.

Antonio Conte would use that and indeed any excuse to squeeze more money and potential wing-backs out of his club chairmen but the Italian must be happy with his summer lot at Tottenham. Those signings adorn the team wonderfully.

With the best attacking trio in the Premier League, a strong midfield, mean defence, bountiful width and league-winning coach, Tottenham have finally stumbled upon a potent formula. It should even work across an entire campaign, rather than just those one-off meetings in which they showed what they are capable of against the two leading lights.