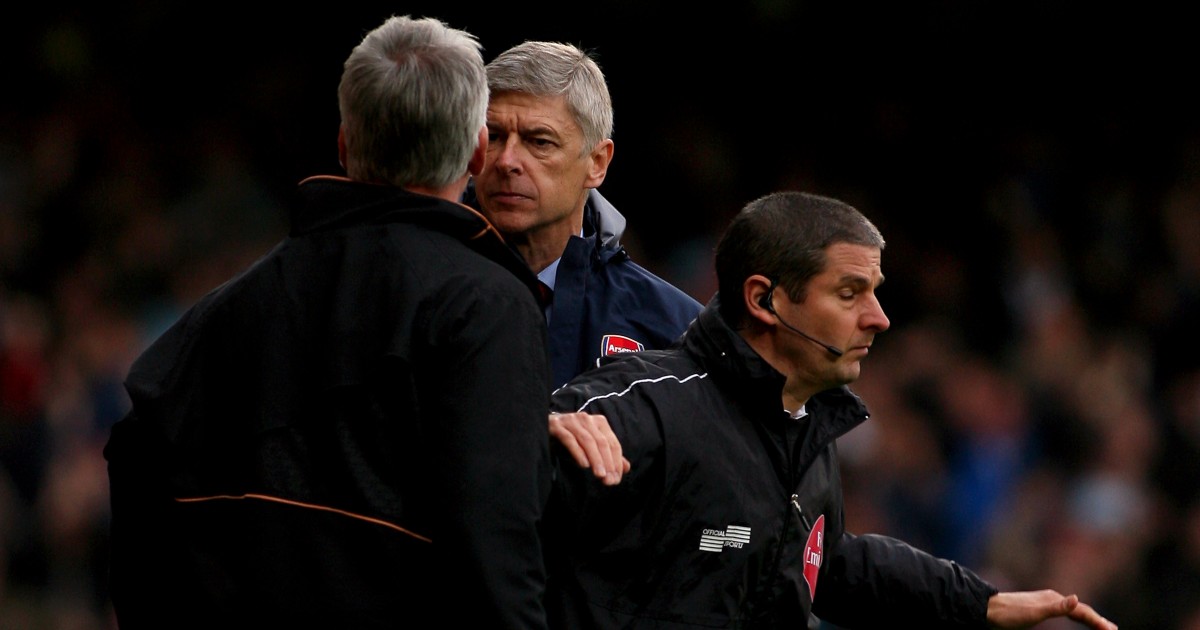 Diego Simeone and Jurgen Klopp are not the first managers to skip the full-time handshake. Jose Mourinho and Arsene Wenger are masters of it.

Diego Simeone ran down the tunnel sharpish after Atletico lost to Liverpool a fortnight ago, then avoided the handshake with Jurgen Klopp again at Anfield on Wednesday. The Argentinian said he doesn’t like the false chivalry of the tradition, These ten knew how he felt.

1) Mourinho regrets Stamford return
Jose often offers the final handshake in advance of full-time, something that Roy Keane claimed would get him knocked out in the Sunday League. When Mourinho revisited Stamford Bridge with his new club Manchester United in October 2016, he had a cordial hug with Antonio Conte before the game. However, the Italian’s wild reaction down the touchline when N’Golo Kante thrust the final dagger in a 4-0 thrashing didn’t help the cold post-match whisperings in the ear. “You don’t celebrate like that. You can do it at 1-0, otherwise it’s humiliating for us,” stormed the Special One

Conte played the straight man in response: “We live with emotions. If you want to cut the emotions, we can stay at home and I will change jobs.” Now that the Italian is back on the Premier League touchline, expect some gesticulations that will make Nuno look like a stuffed toy.

2) Rafa gestures game over to Big Sam’s fury
When Rafa Benitez’s title-chasing Liverpool blew Blackburn away at Anfield in 2009, Sam Allardyce turned up the volume on the Reds manager, accusing the Spaniard of gesturing “game over” as Fernando Torres helped himself to a second goal in a storming 4-0 annihilation.

Goes without saying there was no friendly drink after the game as Big Sam claimed that Benitez didn’t even turn up in his own room with his fellow manager. Even Sir Alex Ferguson got involved by backing up his big mate – as he would with the Reds breathing down the neck of Manchester United. In his autobiography, Allardyce claimed that: ‘Benitez wouldn’t talk to me at all and that just made it all the better when we won.’

3) Pardew v Wenger go heavyweight
Never mind Tyson Fury and Deontay Wilder, Alan Pardew and Arsene Wenger would make for a solid bout. When Marlon Harewood scored an 89th-minute winner at Upton Park in 2006 to beat the Gunners at Upton Park, Pardew’s ecstatic celebrations infuriated Wenger and the two had to be separated after the Frenchman shoved his opposite number in a playground fight. Pardew admitted that he had antagonised the situation somewhat, saying: “It was nothing personal. I was celebrating the goal. Arsene seemed to have a problem with that, probably rightly.” Should have done the dad dance instead.

4) Hughes jousts with cuddly Jol
Straight from the Diego Simeone playbook, Mark Hughes has quite a history of being a non-handshaker. He is on record as saying that pre-match player handshakes do more harm than good while simultaneously liking the tradition between managers. Which is it, Mark?

The Welshman was not amused when opposite number Martin Jol tried to get a bit too close and personal after his Fulham side beat QPR at Loftus Road in 2012. Hughes appeared to push his Dutch counterpart away in the incident.

“I offered my hand and congratulated him but I took exception to it when he went to pat me on the head, which I found slightly patronising.”

The avuncular Dutchman responded: “I tried to grab his shoulder, and he didn’t like it because he’s a tough guy. He’s a winner. Maybe he doesn’t like losing, I don’t know. One of the two reasons.”

5) Sir Bobby tells Arsene how to conduct himself
Arriving in their role as perennial London losers, Newcastle ended four years of pain by storming to a 3-1 win at Highbury to go top of the Premiership in 2001. Graham Poll might have received a penalty ticket for his spot-kick and red card decision which sent Ray Parlour for an early bath. Thierry Henry wanted a not-so-quiet word with the man in black at the end of the match, while Wenger went deep into another preposterous whinge.

“Thierry didn’t swear at the referee or touch him. He just asked why he killed the game, and that could be asked by 38,000 people,” he said. Sir Bobby Robson was having none of it with a response as curt as it needed to be: “Some people at Arsenal have got to learn how to lose. They should learn how to lose around here.”

6) King Kenny and Arsene enter injury time wars
It was the late, late show at the Emirates in 2011 between Liverpool and Arsenal after Jamie Carragher had been concussed, adding a monumental amount of injury time to proceedings.

However, Wenger went ape when Liverpool were awarded a penalty in the 102nd minute of stoppage time after Emmanuel Eboue fouled Lucas Leiva. Dirk Kuyt kept his nerve to secure the draw and TV footage seemed to show Dalglish saying “p*ss off” to Wenger at the end of the match

To his credit, the Scot played the incident down in his typically dry manner: “I just told him there I still owe him dinner. There’s no problem.”

7) Dalglish v Fergie
When Liverpool were cruising towards yet another title in 1988 they were 3-1 up against ten-men Manchester United at Anfield before Gordon Strachan managed to peg it back to 3-3 late on.

Dalglish admitted: “That didn’t leave me in the best of moods.”

Post-match, King Kenny heard Fergie claiming teams never got a decision at Anfield and he interrupted briefly to suggest that the journalist would get more sense out of his six-week-old daughter Lauren, whom he was carrying in his arms.

Ferguson let out a mouthful in his fellow Scot’s direction. “Careful, Alex, the baby’s a bit too young for that,” Dalglish answered back.

8) Potter corks Pep’s champagne
Graham Potter apologised to runaway champions Manchester City for his part in a touchline squabble with Pep Guardiola in May this year.

Brighton came back from 2-0 down to claim a remarkable 3-2 victory against City when Joao Cancelo was sent off after ten minutes. The Seagulls boss received a volley on the final whistle from his illustrious counterpart and the Manchester City bench. It may have had something to do with his celebrations when Leandro Trossard got the home team back in the game. Those damn emotions, eh?

Potter admitted: “It wasn’t my finest hour, I have to apologise.”

Pep kept his cards close to his chest: “What I say to him is personal. Not here.” Potter was keen to make amends and hoped for a “cuddle” next time they met up.

9) Jose jumps to it against Pellegrini
When Fernando Torres scored a dramatic late winner at Stamford Bridge to beat Manchester City in 2013, Jose Mourinho ran in front of the away benches and jumped into the home crowd. The Portuguese is not exactly Manuel Pellegrini’s bestie, and the Chilean was understandably upset, refusing to greet his fellow manager at the final whistle. “I didn’t expect anything else. It is a different way to celebrate from me,” he said.

10) Nuno forgets to commiserate with Colin
Football life used to be happy for Nuno Espirito Santo. As his impressive Wolves team sprinted towards promotion and the Championship title in 2018, Nuno sprinted on to the pitch after a dramatic 1-0 win over main rivals Cardiff which sent them nine points clear. Neil Warnock’s team managed to miss two stoppage-time penalties, but ‘Colin’ was apparently more irritated at a lack of class. “I went to shake his hand and he ran off, that’s what he did. That’s what he does, that’s how they taught him in Portugal then fair enough, but not in Britain. He can say anything after the game, I’m talking about when the whistle goes, what he should do. The etiquette, the manners, the class.”

Perhaps we can expect the Neil Warnock lecture on manners at the Oxford Union just after Joey Barton’s next invite.