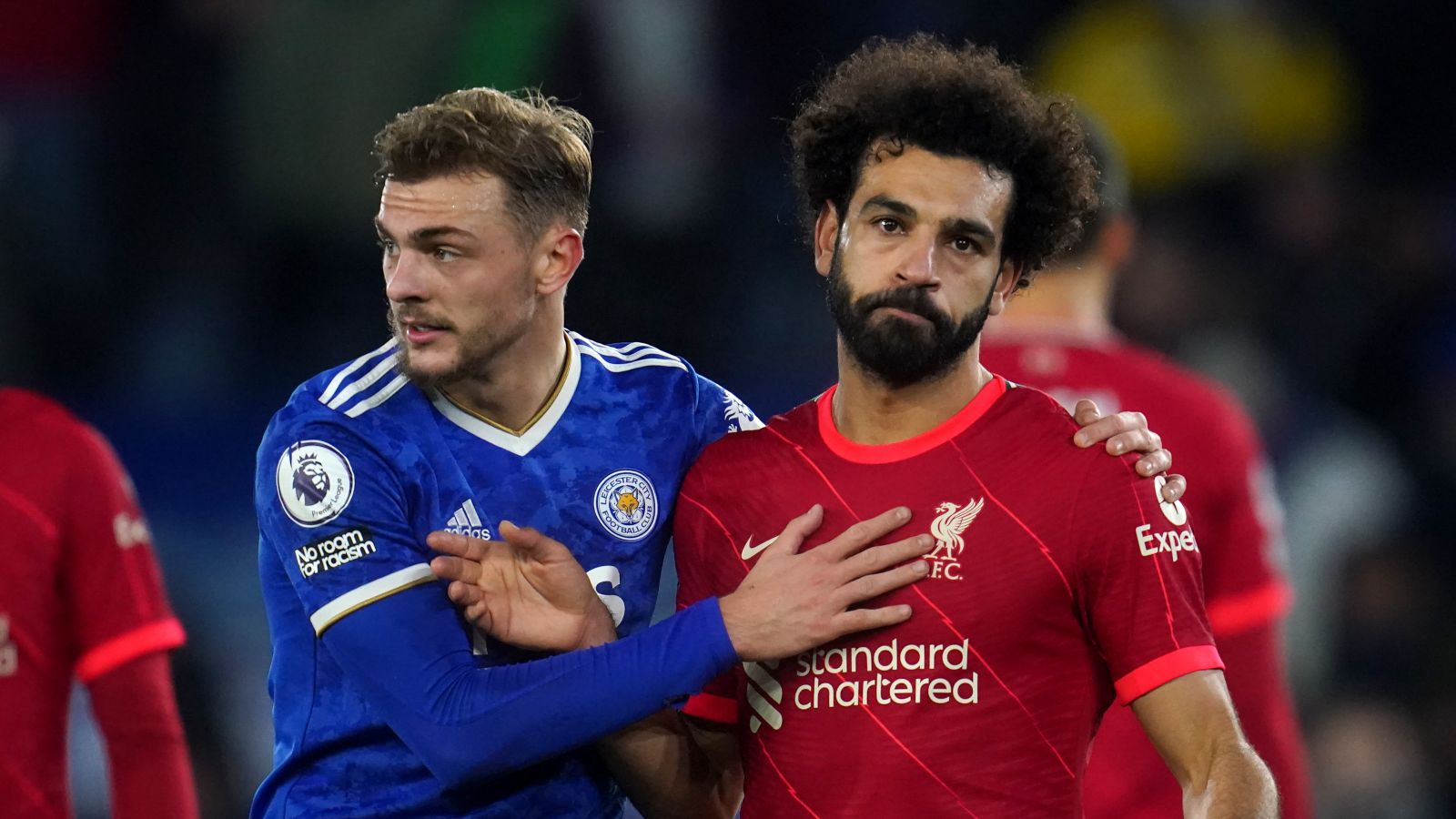 Liverpool surrendering the title and Ole Gunnar Solskjaer turning another Man Utd corner are among the most deceptive results of the season.

10) Burnley 1 Tottenham 0 (23/2/22)
It took Sean Dyche a few months to plot Burnley’s best route to survival. The manager eventually determined that relegation could not be wrought upon his precious Clarets if they simply failed to complete the season, thus their position of 20th in mid-January felt a little fallacious. Burnley had as many as five games in hand on the teams around them, experience was on their side and there was no sense of panic in the dugout or squad.

By the time Tottenham visited Turf Moor in late February, Burnley had accepted their obligation to fulfil fixtures and even navigated consecutive matches against Arsenal, Watford, Manchester United, Liverpool and Brighton with a single defeat, three creditable draws and a resounding victory. The perception that Dyche and his players had timed their approach to peak form and would pull comfortably clear of the bottom was reinforced with a battling 1-0 midweek victory that simultaneously underlined why Tottenham’s Champions League qualification candidacy was founded on quicksand. Burnley remain ensconced in a scrap to avoid the Championship, while Antonio Conte might be eyeing a sprint finish at that run-in.

9) Newcastle 3 Brentford 3 (20/11/21)
In Eddie Howe’s five seasons as a Premier League manager, his Bournemouth team’s goals against column ranged anywhere from the second to the fifth worst in the entire division. They conceded between 61 and 70 times per campaign, maintaining their top-flight status through an effective attack and progressive style that counteracted a defence generally comprised of cogs who had been along for the Football League ride. Roy Hodgson, he was not.

Newcastle made a hash of his appointment in more ways than one, but many felt he was the wrong fit to begin with because of an apparent lack of defensive coaching instincts. The Magpies needed someone to plug the numerous gaps Steve Bruce had left behind. What will forever remain technically the first match of Howe’s reign suggested a continuation of that fallibility, albeit with a far sharper threat at the other end. Howe was absent for the 3-3 draw against Brentford at St James’ Park yet that ludicrous match seemed to confirm he would follow the same blueprint of excitement and goals flowing at either end that proved so successful at Bournemouth. That theme continued for another month or so but the Magpies have not conceded more than a single goal in a game since Boxing Day, prioritising solid foundations over all else.

8) Tottenham 0 Wolves 2 (13/2/22)
Wolves had not long since completed their first night shift on the celebration police rota before visiting north London with their season hanging in the balance. Bruno Lage’s Morse gods – kings of the 1-0, 0-1 or 0-0 – were sliding into Europa Conference obscurity and it is vaguely baffling to think a point separated them from Brighton on the eve of their Tottenham trip. They are 13 points clear of the Seagulls five weeks later.

Tottenham ensured Wolves barely had to work for the points, surrendering two goals through a series of individual mistakes within 18 minutes. There can have been few more straightforward away wins all season, the result thrusting Wolves back into the Champions League conversation and consigning Tottenham to a third consecutive defeat, thus rendering their hopes moot for the 427th time this campaign. That afternoon did nothing to reflect their subsequent trajectories.

7) Liverpool 2 Brighton 2 (30/10/21)
“I like watching his teams a lot. I don’t like playing them much,” said Jurgen Klopp, aggrandising Graham Potter from the position of magnanimous victor. But his words were not hollow. Liverpool had protected a two-goal lead against Brighton at The Amex; the same could not be said of their previous meeting in October. The Reds were 2-0 up before the half-hour mark at Anfield, pegged back soon after the hour rolled around.

It was another of those stumbles that characterised Liverpool’s early season – and may yet undermine them. Eleven of their 18 dropped points came in the first few months, forgivable draws with Chelsea and Manchester City compounded by stalemates against Brentford and Brighton that were characterised by defensive weakness. West Ham actually went above the Reds by beating them before the November international break, but it was that Brighton match – which followed successive 5-0 wins over Manchester United and Watford – that exposed their apparent problems.

The 2-2 draw also added a sheen to Brighton’s campaign and suggested they could compete with the elite; they have not beaten a team currently higher than 10th all season.

6) Tottenham 0 Manchester United 3 (30/10/21)
Manchester United reached a greater understanding of the phenomenon of terminal lucidity towards the end of last year. Ole Gunnar Solskjaer’s reign had experienced a number of natural cut-off points, each rejected by a hierarchy insistent on flogging a horse that had already been pencilled in to make lasagna and glue. The 4-2 Leicester defeat was conclusive; the 5-0 Liverpool loss was an incurable and abject wound left to fester. Beating Tottenham six days later was the application of a plaster, surgically and excruciatingly removed soon after by Manchester City and then ripped open by Watford. Solskjaer changed formation and approach to humiliate Nuno Espirito Santo out of a job but he himself had turned no corner.

5) Norwich 2 Southampton 1 (20/11/21)
The Canaries were first down the mine and distinctly without hope in November. Norwich lost eight and drew two of their first 10 Premier League games, had their top-flight credentials revoked by all of talkSPORT and were already checking the Championship table to see who would be finishing second to them next season. A win over Brentford showed signs of life but it almost instantly that the decision to sack Daniel Farke had already been made and it was a mere final flourish.

His projected replacements were soon lined up. Steve Bruce was mentioned. Kjetil Knutsen, too. And Roy Hodgson. The prescient Frank Lampard was the favourite at one stage but pulled out of the running because he didn’t fancy a relegation battle. So Dean Smith, only recently dispensed with by Aston Villa, stepped up. Beating Southampton at home from behind in his first game seemed to signal a Norwich revival inspired by a change, even dragging Saints into the mix. The Canaries have picked up nine of a possible 51 points since and Southampton are currently in the top half.

Don’t know if this is a coincidence but Norwich really are a horrible, diving, moaning shower of a football team much like the Brentford & Villa sides coached by Dean Smith were…funny that #lufc

4) West Ham 1-2 Brentford (3/10/21)
Hardly resembling buoyant Europa League finalists keeping esteemed company in the Premier League, West Ham entered the October international break on the back of a chastening defeat to Brentford. It was their third game without a win in a stadium they can now finally call home, leaving them below the Bees and ninth in the table, their place as glass ceiling testers seemingly taken by Brighton – yes – and Everton – yes.

“When you become a club that win you get used to it and I think Brentford will keep on going,” David Moyes said of his conquering visitors. Brentford would lose five of their next seven matches. They should be safe but those autumnal predictions of a top-half finish soon faded away.

3) Leicester 1 Liverpool 0 (28/12/21)
A missed Mo Salah penalty and some timely Sadio Mane profligacy made those Africa Cup of Nations concerns seem a little misguided. Liverpool huffed and puffed but could not blow down a Leicester side they had stunned in the Carabao Cup six days earlier. The final shot count was 21 to six in the favour of the visitors, but The Most Important Statistic was Ademola Lookman’s goal on the hour mark.

The inquest that followed focused on the Liverpool attack. Virgil van Dijk blamed being “poor in the last third” instead of his failure to close Lookman down. Jurgen Klopp suggested his players “forced it a little bit too early”. Both criticised a reliance on quick and imprecise crosses. Liverpool tumbled to third when Chelsea drew with Brighton the following day and Manchester City’s nine-point lead, albeit having played an extra game, already felt insurmountable.

2) Everton 3 Southampton 1 (14/8/21)
The first four weeks of Everton’s season fit the bill of deception. The Toffees also beat Brighton and Burnley, taking Leeds to an entertaining draw at Elland Road as Rafa Benitez hit his stride upon returning to England. With the European qualification field thinned by incompetence elsewhere, Everton were primed to take advantage.

It all started with victory over Southampton on the opening day. Goodison Park was treated to a comeback win after a stirring second half in which Richarlison, Abdoulaye Doucoure and Dominic Calvert-Lewin all scored. Benitez was back to provide stability at a club with genuine attacking excellence ready to be unlocked. Southampton, whose squad had ostensibly been weakened in the summer, were outside bets for relegation and failed to win any of their first seven games.

1) Arsenal 2 Crystal Palace 2 (18/10/21)
‘So – did Arsenal pick the wrong former midfielder who spent a bit of time at Manchester City?’ The Independent asked. “Is there almost like an invisible energy now wanting Vieira at the football club?” pondered the great philosopher of our times, Trevor Sinclair. “I think at some point he ends up at Arsenal as manager,” said Darren Bent. ‘If Arsenal needed Patrick Vieira’s managerial credentials ramming home, the message was delivered here,’ The Guardian noted. ‘It was the sort of game that will have Arsenal fans wondering whether they would prefer Vieira in their dugout to Arteta,’ one sexy man wrote for one sexy website.

And that really was the general consensus: having spent a decade and a half trying and failing to replace Vieira as midfield general, Arsenal might be embarking on a period of yearning for the Frenchman as manager. The passage of time would shine a different light on this result, with the Gunners winning their next three and Palace beating Manchester City by the end of the month as proof that a home draw might not have been the worst outcome. Arteta, at one stage destined for the sack, is now one of the more secure coaches in the Premier League and on the brink of exceeding season expectations. While the same can be said for Vieira and his FA Cup semi-finalists, the only person seriously suggesting he should replace the Spaniard at Arsenal now is Stan Collymore.