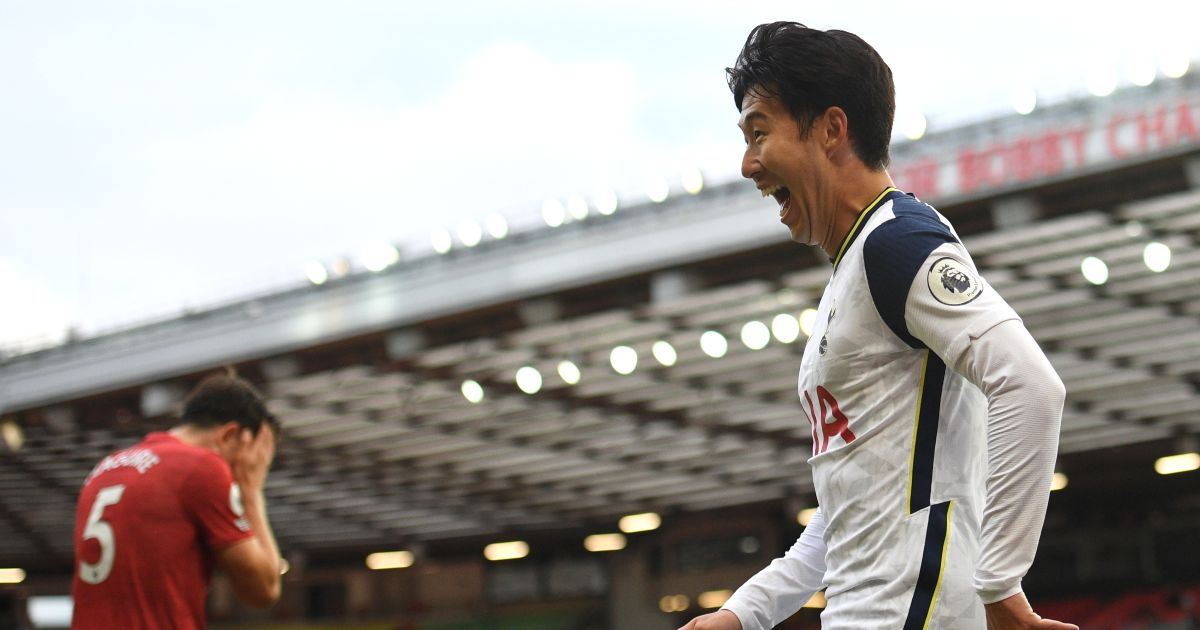 Many results can be strangely deceptive in hindsight, like when Liverpool were definitely winning the league because they hammered someone.

10) Newcastle 3-1 Burnley (3/10/20)
Steve Bruce hoped that a 3-1 victory at home to a depleted Burnley side who Newcastle had outspent by £34m that summer would have “quietened a few” critics. The volume has certainly been turned up since they went sixth with this win back in October.

“We have tried to change and be more expansive. It goes up and down so quickly – that’s Newcastle,” said the manager in a rare moment of clarity and prescience. This game in particular suggested that Bruce might deploy a more adventurous style with a squad that belonged no lower than mid-table in terms of quality. The subsequent months have proved otherwise.

It was also this result which led some to believe that Sean Dyche’s powers had waned. A third successive Premier League defeat for Burnley – who would not collect their first win until their eighth fixture – felt terminal. By the time they are scheduled to host Newcastle on April 11 they could be eight points clear of the Magpies and pretty much safe once again.

9) Arsenal 1-2 Wolves (29/11/20)
When St. Luke’s FC was founded in 1877, they were seventh. When they merged with the football arm of nearby cricket club Blakenhall Wanderers to form Wolverhampton Wanderers in 1879, they were somehow seventh despite the Football League not being established until 1888, at which point founding member Wolves started and finished in seventh. When they won Division One with Stan Cullis three times in the 1950s, they actually finished seventh on each occasion. When Steve Bull was knocking them in in the Fourth Division to inspire promotion, Wolves came seventh. Look it up. It’s incredible but true.

Despite always being and always finishing seventh, Wolves have only ever actually come seventh eight (oh so f**king close) times. Two of those instances happened in the top flight: 2018/19 and 2019/20. So when Wolves went seventh by beating Arsenal 2-1 in November, the stars were aligning once more.

That is the only time they have been seventh all season, despite being seventh all season. The Premier League table might say 13th next to Wolves’ name, with an 11-point gap to seventh, but it’s not kidding anyone. Nice try. Nearly had us there. Wolves. Seventh.

8) Southampton 1-0 Liverpool (4/1/21)
Ralph Hasenhuttl sunk to his knees with a mixture of joy, relief, pride and serotonin seeping through his tracksuited veins as Southampton secured one of the most impressive victories of this Premier League season. An early Danny Ings goal was enough to hand Liverpool only their second defeat of the campaign, one entirely more realistic than that cartoonish 7-2 aberration against Aston Villa.

That win lifted them into sixth, four points behind the champions and leaders, locked in a multi-team battle for at least a Champions League place. Yet in the 12 games since Saints have won one, drawn one and lost ten, picking up fewer than half the number of points (4) as the next worst team (Newcastle, 9) and conceding at least ten more goals than anyone in that time. Injuries have decimated the FA Cup semi-finalists but that battling success against Liverpool was never supposed to be the prelude to such a pronounced collapse. 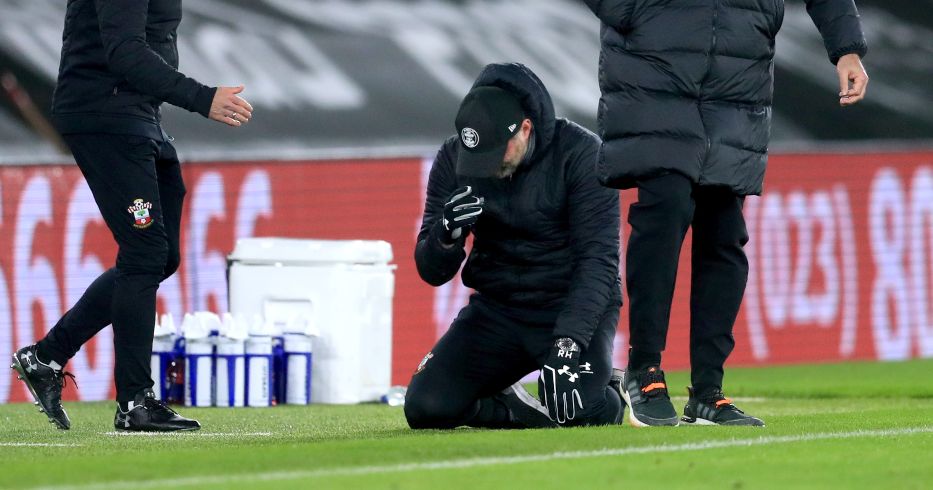 7) West Brom 3-3 Chelsea (26/9/20)
Despite the season starting in the middle of that very month, West Brom managed to score a quarter of their current total Premier League goals in September. A 5-2 humbling at Everton was followed by a ludicrous draw with Chelsea at The Hawthorns despite being 3-0 up after almost an hour. They have scored only six home goals since.

Most people expected the Baggies to slide back down from whence they came but that thrilling Chelsea draw threw weight behind the idea they would at least entertain on their journey. As it is, Sam Allardyce has nine games remaining to help anyone other than Matheus Pereira (5) and Kyle Bartley (3) score more than two Premier League goals.

6) Manchester United 0-1 Arsenal (1/11/20)
While Ole Gunnar Solskjaer wrestles with the inner turmoil of being a Manchester United manager who isn’t all that fussed whether they win a trophy, there was a time not so long ago that him being in charge of the team at all felt inadvisable. An awful start owing to a number of factors culminated in Arsenal leaving Old Trafford in November with their first away Premier League win since 2007, a result which left United 15th and floundering.

That preceded a 13-game unbeaten run that actually delivered them to the summit but Pierre-Emerick Aubameyang’s decisive penalty that evening implied that Arsenal and Mikel Arteta might have overtaken their foes in terms of development. The Gunners winning their first away game against a Big Six side in nearly six years seemed momentous, marking their new-found maturity. Yet they went seven matches without a win thereafter, Arteta’s position was in genuine jeopardy and a 2-0 surrender at Tottenham the following month was a dispiriting return to the norm.

5) Tottenham 2-0 Manchester City (21/11/20)
Spurs themselves were in the midst of some rather deceptive form at that point. Their insipid opening-day reverse against Everton felt specious in itself after 11 games without defeat from September to table-topping December, yet the twist was that they were frustratingly and characteristically inconsistent all along.

The height of their illusion came in late November with a double-edged narrative sword. Not only were Tottenham brilliant and Jose Mourinho back as Liverpool had a proper challenger, but Spurs’ 2-0 victory over Manchester City signified the probable end of Pep Guardiola as the fraud had been found out.

So emphatic was the win that faux-magnanimous Jose made a delightful cameo appearance. “For me, I prefer the players to speak because they are the ones, they were fantastic, they gave everything. They follow a strategy and football sometimes, more than ever, strategy plays an important part. City is a fantastic team that lost against a team that strategically was very good but City is still City.”

It’s a wonder what happened to those strategies.

4) Fulham 0-3 Aston Villa (28/9/20)
The final whistle had not long gone by the time director of football Tony Khan issued a public apology to Fulham’s supporters. ‘I’m sorry everybody,’ he said. ‘We all need to do a better job. Everyone at the club for the past year worked really hard to get the team up and now we need to work significantly harder to stay up.’

The two promises he issued felt crushingly empty: ‘players in and better efforts from this squad.’ That 3-0 thrashing at the hands of Aston Villa followed a 4-3 loss to Leeds and Arsenal’s 3-0 hammering of the hapless Cottagers, with experts, pundits and idiots lining up to condemn them to the Championship. Each of us cited their 2013/14 and 2018/19 seasons, those absolutely awful defensive records that Scott Parker and his charges were destined to match. Even with the pledge over improved recruitment Fulham have exceeded all expectations. They conceded three goals in each of their first three games, peaking with that Villa embarrassment. In their subsequent 27 matches, they have let in three only twice.

3) Crystal Palace 0-7 Liverpool (19/12/20)
The Daily Mail described it as ‘an emphatic statement that normality is being restored’ by a team that ‘will take some catching’. The Independent, while pointing out that ‘it could all change again so quickly in a matter of weeks’ due to the nature of the season, reported on an ‘ominous’ display that left ‘no question which team is the best’. Even the BBC reported that Liverpool ‘underlined their status as favourites’. This very parish called it ‘bad news for the rest of the league’ as the Reds put on a Goal of the Month package of their very own at Selhurst Park on one crisp December afternoon.

That supposed statement was followed by a whisper: Liverpool drew with West Brom, went on a four-game run without even scoring, lost their proud unbeaten record at Anfield and were beaten by all manner of teams to slip into a Europa Conference League battle. Not sure anyone expected that.

2) Manchester United 1-6 Tottenham (4/10/20)
Philippe Albert’s chip. The Jody Morris trumpet. Mario Balotelli’s plea for peace. The heaviest Premier League defeats in Manchester United’s history all evoke one abiding memory and it remains to be seen how history recalls their capitulation against Spurs in October. Harry Maguire playing head tennis in his own box with Eric Bailly before hauling down Luke Shaw, perhaps? Or Serge Aurier raiding forward to zip one in and complete his passable Dani Alves impression? Maybe the sympathy shown by Anthony Taylor not to reduce United to nine men after Shaw’s atrocious tackle on Lucas Moura at 6-1 down?

Take your pick. It was difficult to see a way back for Solskjaer at this point as his wonderful record in games against fellow Big Six opponents had been shattered. This was also an irresistible, ruthless and swashbuckling attacking display from Tottenham. Yet United used this to rip everything up and establish a new resilience, while Spurs have only scored as many goals as West Ham (and Liverpool) since.

1) West Ham 0-2 Newcastle (12/9/20)
The Hammers, of course, have embarked on a quite exceptional season. That they can be legitimately disappointed with drawing 3-3 against Arsenal after losing away at Manchester United is testament to the job David Moyes has done. Many predicted he would be sacked at the first opportunity.

That 2-0 home loss to Newcastle on the opening day feels like it belongs to a different era, a result entirely at odds with what has unfolded since. The Magpies were remarkably efficient as Steve Bruce rode a wave of positivity sparked by some solid summer business. West Ham had signed no new players and Graeme Souness was left to suggest their captain perhaps hadn’t helped by openly criticising the club for selling Grady Diangana.

Newcastle are scheduled to host West Ham in April. They will do so battling relegation while the Hammers chase Champions League qualification sustained by the second-best home record in the Premier League this season. Nothing will ever make sense again.