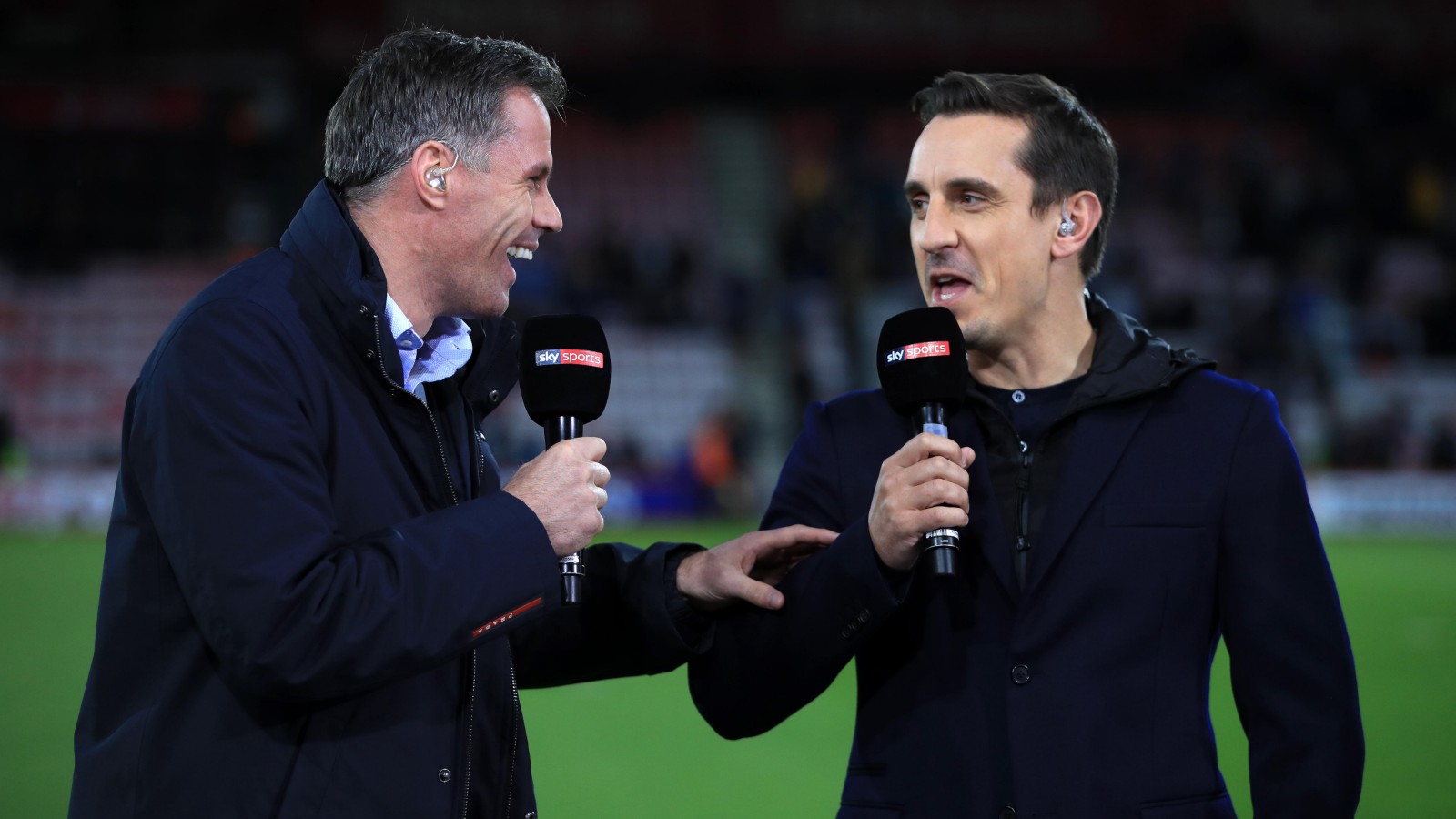 Graeme Souness v Tyrone Mings has caught us – and indeed Tyrone Mings – off-guard. It won’t reach the lofty heights of Carragher and Simpson.

10) Jorginho versus Rio Ferdinand
Chelsea had just been beaten 2-0 at Arsenal in January 2019, thus loosening their grip on a Champions League qualification place, when Rio Ferdinand opened a can of worms that would not expire for a good couple of years.

The BT Sport pundit described Jorginho as “someone who sets the tempo of the game” before going on to explicitly state that he “can’t run”, is “not a great defender” and “doesn’t give you anything at the other end of the pitch”.

It came at the height of Sarriball, and subsequently the peak of Jorginho scepticism. The midfielder kept schtum until suddenly, upon being voted UEFA Player of the Year in September 2021, he shared a video on social media of the two-year-old critique, followed by a clip of him accepting the award.

“I won’t say I was wrong in what I said, at that time that was where he was,” came Ferdinand’s response a week or so later. Yet by that November, he was “not trying to be disrespectful” in explaining his confusion as to how Jorginho could be nominated for the Ballon d’Or, his lesson clearly not having been learned.

9) Florian Thauvin versus Alan Shearer
Chancel Mbemba started it. The centre-half was the first to heed a message from above to “look sharp on match days”, deciding that Steve McClaren and his staff meant for everyone to start wearing tuxedos.

Florian Thauvin literally followed suit before an August 2015 visit from Arsenal, inviting the opprobrium of club legend Alan Shearer – and Daily Telegraph journalist Matt Law, who suggested players should just “all turn up in a circus outfit next week because it’s just stupid, absolutely stupid”.

“This is a serious business we’re in here,” said a disapproving Shearer, who later implied ‘a lack of work rate’ from the Frenchman in his newspaper column.

Speaking on the issue after being loaned back to Marseille following a few underwhelming months on Tyneside, Thauvin took that as being “violently criticised”. A couple more years passed before the World Cup-winning winger suggested that Shearer’s evaluation – “a club legend spoke about me. And since he’s a legend…” – scuppered any hopes of a successful Magpies spell.

8) Mesut Ozil versus Martin Keown
It was actually an agent rather than a player or pundit who provided this particular spark.

Martin Keown made no secret of his aversion to Mesut Ozil, having accused the German of “downing tools” and “not giving everything to the cause”. In May 2018 he crossed a line with a snarky line about how the Arsenal forward “will have some emotional breakdown” soon.

Erkut Sogut, Ozil’s representative, had enough by this point. He dismantled “Arsenal reserve” Keown and committed the cardinal sin of saying his wild celebrations after Ruud van Nistelrooy’s penalty miss in 2004 “brought shame” upon the club.

This did prompt Keown to tone down the invective, albeit temporarily. A few months later, he seemingly proudly claimed that “if he was in our dressing room a few players would have had him around the throat early on because of his body language”.

The largely one-way traffic continued as Keown accused Ozil of “conning” the supporters and “hiding” during games. At no point did the player himself publicly respond, which probably only wound his adversary up more.

7) Danny Simpson versus Jamie Carragher
Lord knows beef is often best when left to simmer. So when Jamie Carragher referred to a Leicester squad in a post-title relegation battle as “an average group of players who did something special last season”, Danny Simpson had prepared his response and was waiting patiently for the perfect moment.

It finally came later that month when Leicester ended a five-game losing streak to beat Liverpool 3-1 in their first match since Claudio Ranieri’s sacking in February 2017.

“I don’t think I’ve ever seen a game where two teams should come off the pitch and hang their heads in shame,” Carragher told Sky Sports. “Liverpool for how bad they were and Leicester for how good they were on the back of how poor they’ve been, just through effort and commitment.”

Simpson took his shot by posting a picture of Carragher in an Everton training kit while roping in a more-than-willing Gary Neville for the burgeoning battle.

The subsequent tweets saw the Manchester United outcast goad the one club-man over his lack of a Premier League winner’s medal, before ‘snake’ Simpson was accused of having been part of a group of Leicester players that reportedly met with the club’s ownership to depose of Ranieri.

It actually got rather personal, with Carragher alluding to Simpson’s assault conviction after ‘a line was crossed’ when the latter suggested the former’s wife had taken a picture of him idly donning his title medal in the living room. The two thankfully buried the hatchet soon after and the playground was quickly evacuated.

Rough times for Carragher when he got mocked by Danny Simpson out of all people😭 pic.twitter.com/p2lkbmJeLM

6) Richarlison versus Jamie Carragher
That Sky Sports platform inevitably puts Carragher in the line of fire more than many of his contemporaries. And while some players rise above whatever criticism the pundit issues, a handful are less willing to let dogs lie.

Carragher had already accused Richarlison of play-acting and exaggerating injuries on a number of occasions before the Brazilian, posting during an adrenaline high at 1.37am the morning after Everton’s comeback victory over Crystal Palace last season, advised: ‘Wash your mouth out before you talk about me and Everton and I don’t respect you.’

It was a dose of medicine that Carragher actually quite enjoyed. ‘If Twitter was about when I was a player I’m sure I would’ve called pundits out quite a lot!’ he responded.

As recently as this month, Carragher teased a continuation of their rivalry by discussing Richarlison’s perceived diving and saying: “I guarantee you Everton fans when they play Tottenham this season will be saying the same if he carries on with that.”

5) Loris Karius versus Gary Neville
The other jewel in the Sky Sports punditry crown has had more than his fair share of scrapes. Jose Mourinho, Louis van Gaal and Romelu Lukaku have all challenged Gary Neville in the court of public opinion but Loris Karius might actually have been one of the first high-profile figures in football to go for the jugular and weaponise his Valencia tenure.

Karius had faced a growing tide of criticism that reached a crescendo of sorts after a 4-3 defeat to Bournemouth in December 2016. Neville’s reaction had been relatively tame in comparison to Carragher but the Liverpool legend was forgiven as “a bit frustrated”.

No such concession was made for a Manchester United legend. Karius picked his shot carefully: “He was a top player, then he was a manager for a short bit and now he is back to being an expert again.”

It was a microcosmic section in a wide-ranging Daily Mail interview that snowballed into the story of the month. Neville sarcastically offered his ‘sincere apologies’ as a ‘failed manager’ the next day, only for a protective Jurgen Klopp to wade in and question how Neville is given such an influential platform when “he showed he struggled with the job to judge players” at the Mestalla.

Neville went on to point out that he is capable of identifying a good steak despite his lack of experience as a chef, before defending himself against accusations of bullying Karius.

He admirably resisted the urge to pile in after the 2018 Champions League final, which perhaps played a part in Klopp admitting he “made a mistake” with his vociferous reaction soon after. Neville, for his part, said it was the one occasion on which he “went too far” and “overstepped the mark” in his position.

4) John Terry versus Robbie Savage
After meeting 11 times as opposition players, with a single draw interrupting John Terry’s ten-game winning streak, Robbie Savage perhaps had reason to harbour some swelling contempt. Yet it was the Chelsea talisman who seemed to let his disdain get the better of him.

The Blues were 15th, their title defence creaking and Jose Mourinho a month away from the sack in November 2015. Terry, as captain (leader, legend), bore the brunt and, for the most part, characteristically accepted it head on.

But there was one caveat.

“I’ve come under criticism, individually, from certain players and individuals, players I’ve looked up to and played alongside,” he said during an innocuous Champions League pre-match press conference. “I’ve taken that on the chin: Rio, Carra, Neville, the very best I’ve come up against in the game. I take that on the chin.

“When others speak, maybe I don’t take it on the chin. When players have not had a career, played at a really bad level in their career… Robbie Savage being one. He’s dug me out a couple of times. You take it as a footballer, as an individual. I’ll take it from the Rios, Carraghers and Neville. All day long. From others? Nah.”

Savage opted to question not the textbook pluralisation but the implication that “99% of the industry – those of us who have not won the title or Champions League titles – is unqualified” to offer analysis. It admittedly would thin the punditry field out considerably, while conveniently providing Terry with some extra work.

3) Trevor Brooking versus Brian Clough
Ever the wordsmith, Brian Clough still erred in terms of his timing. That has never been more true than on the morning of the 1980 FA Cup final, when his dismantling of Second Division West Ham, and particularly midfielder Trevor Brooking, was published in his weekly Daily Express column.

Cough was typically furious that the Hammers had focused on reaching Wembley instead of returning to the top flight, with maximum censure reserved for Brooking, who ‘floats like a butterfly and stings like one too’.

Brooking, who Clough had actually tried to sign for Derby alongside Bobby Moore a few years prior, had the last laugh with the winning header.

He even received an apology a decade later while working as a pundit himself. “He came really close to my face,” Brooking recalled in 2006. “He said: ‘Young man, many years ago I said something in a newspaper before an FA Cup final and I was wrong and I am sorry’.”

2) Roy Keane versus Eamon Dunphy
It is remarkably on-brand for one of Roy Keane’s most enduring feuds to be an extension of a previous one. He and Eamon Dunphy were hardly braiding each other’s hair but the journalist and pundit had got close enough to the midfielder to ghost-write his explosive 2002 autobiography.

And that was the problem. When the FA inevitably took exception to an excerpt in which Keane seemed to suggest his infamous tackle on Alf-Inge Haaland was premeditated, the midfielder was charged with bringing the game into disrepute. His defence was that Dunphy had employed ‘artistic licence’ with the phrasing and he called his compatriot in as his key witness in the ensuing investigation.

When asked by FA lawyer Jim Sturman whether he felt Keane “intentionally went to injure his fellow professional” that day, Dunphy replied: “Without a doubt.”

Ah. That’ll do it. Although Dunphy’s timeline says it was his condemnation of Keane’s work at Sunderland that actually caused the breakdown. Still, the whole court thing can’t have helped.

1) Paul Pogba versus Graeme Souness
Over the course of five years, Graeme Souness labelled Paul Pogba “a YouTuber”, “a schoolboy running after the ball in the playground”, “a little bit flamboyant for my taste” and “an absolute doddle to play against”, among various other things.

Pogba, in his sole response, said that he “didn’t even know who” Souness was and that he had only “heard he was a great player and stuff like that”.

Souness took that predictably well: by telling an actual World Cup winner to “put your medals on the table”. With Pogba gone, he has had to find another really weird target.